Great progress. I guess you'll refine it's look and feel a bit more, but one thing:
is it possible to auto-save the changes instead of clicking the save button that appears? I see that it's going to get pretty repetitive. But so far, it looks really nice and smooth to use!


But, as usual, function before form. I guess just get the whole thing working before tweaking with aesthetics!

On second thought, (or read):
Do you think you could release a smaller update (without the new UI) that brings us the much long awaited features (that you did approve):

@everyone, Any more that I missed?

@everyone, Any more that I missed? 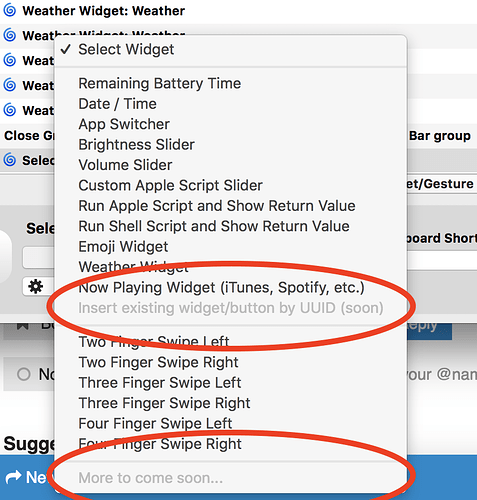 Hello,
Nice UI. i like it very much.
I hope it will be released soon

I've got a little question : will it be a free update ? (for Standard License and Lifetime License)
I'm planning to buy it, and I hesitate on witch one. (I've got an old licence witch has expired severals months ago...)

Yes, it will be free for all non-expired licenses! Release should still happen in december.

@yyukio I'll release an alpha that covers 1-3 tomorrow. Maybe I can also get the play/pause widget in. However due to the new UI work, there have been various significant changes all around BTT. This means it will probably only be available on the alpha channel for a while to make sure I didn't break anything

@touchpilot I have postponed the insert by UUID to when the new UI is available as it's much easier for me to add there. The "More to come soon" is just generic as I'm always adding stuff

@Andreas_Hegenberg : Thanks you for the confirmation

awesome, thanks for the update

@yuuiko ahh just as I was about to upload the alpha, I came across a stuuupid bug which I defnitely need to fix first. Sorry! Tomorrow I'll definitely upload it!

my body is ready reggie

ah, its very annoying when that happens isn’t it?

you get so close and excited then that one bug comes along... XD

BTT says 2.661 is available, but an error occurs when trying to install using BTT app. I downloaded and installed by clicking on 2.661 link, and that seems to work fine. But now when I click Check for update this is what comes up:

Edit: And I just realised that the menu bar is also showing the ${product_name} thing instead of saying BetterTouchTool.

Ah sorry, had the wrong url in there. Fixed now. Just quick note: you can always access the latest releases via https://bettertouchtool.net/releases/
However be aware the new UI is still hidden in this alpha, it just brings a few of the requested features. New UI soon....

Thanks for reporting the ${PRODUCT_NAME} issue, that's because I started translating the app to other languages and apparently forgot about this

Don't worry about it.

I'm having a major issue with the latest alpha version:

I can't open the BTT bar from the control strip button!!

Ah that's possible, you should be able to workaround it by adding a custom control strip button and assigning the "Toggle BetterTouchTool Touch Bar" action

I’ve tried your suggestion but it isn’t very stable in updating it’s changes. I’ve set the widget but it usually doesn’t update the button..

(i use CAGroups a HEAP in my AQT preset.)

Question:
Can I add a BTT button widget to every app/CAGroup or does ‘add only one’ mean add only one in the whole preset?
If two presets are open/accidently two btt button widgets are added, how is it handled?

I’ve yet to implement your other new features and test them out. Stay in tune for that.

Weird, that seems to work fine here. I'll do some more testing later. Are you on Mojave?
// ah I think it's sometimes not updating the icon - could you verify that if you assign different colors to the control strip buttons, these are updated everytime?
//no, that only happened when I didn't assign a icon to some of the widgets

"Add only one" just means that you can not have more than one custom Control Strip button visible at a time. If you define multiple for one app it will be random which one is used.

I just uploaded v2.662 to fix the Touch Bar toggling, but I can't reproduce the "not updating" issue yet.

Customise BTT Button The issue was discussed here: Show window bezel for floating HTML menu It shows, but the shadows are missing. It's hard to differentiate it from the backgrounds: Additional "Show Window Shadows" box?

If you're looking for any more thoughts on the new UI, a few things occurred to me.

It looks great! But at the same time, it seems like a lot of modern design like this that is so good to look at tends to lose some of the raw, "sterile" functionality of older iterations of itself.

For example, I actually find the old list view more useful than this new one (even though the former is harder to look at), because it is easier to organize and see similar shortcut assignments grouped together when they're vertically stacked & isolated in a column. Not to mention, you can see more of your assignments laid out at once when it's all horizontal. Multiple lines of text per list item don't seem as useful to me for the job at hand. It's the one thing that adds visual business, making it harder to see & manage things on the whole. The modifier keys correspond to the Gesture description, but they are underneath it, next to Action. Plus, I don't think there really is a hierarchy between Gesture and Action assignment; it seems a bit more difficult to see what each gesture's action is when that text is smaller and fainter.

That being said, well done on the whole! It looks super sleek, and I do love the visual simplicity.

I agree that the list view was good for overview if you have many triggers configured. However for beginners it's really hard to get used to it (I get requests from users asking how to assign multiple actions to a trigger all the time).
I think the new view will be much better for 90% of the users. (Because most users just use some few functions in BTT).

However while building the new UI I made sure that I'll be able to add an advanced mode in the future, that will be based on a list view and still have the nice new sidebar for configuration.