Looks awesome! Excited to see this in place!

I'm not English, but isn't the correct way to say this "...is currently the latest version available"? Maybe some English native in here could help us out with that...

"Newest" works fine here (this is actually coming from the sparkle updater framework, so most macOS software will say "newest"). Latest would also work.

Quick Update:
I have decided to add the list view in the initial release of the new UI. The new architecture made it very easy to integrate, so it's just a few more lines of code. It will pretty much be the old list view, just with the added sidebar and based on the new UI technologies. 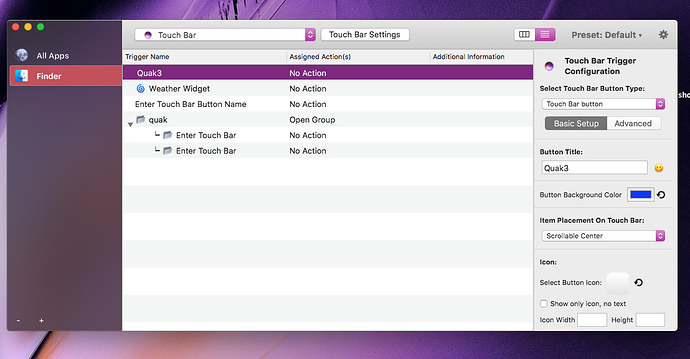 Thank you for this Andreas! I do believe that even for us advanced users who do end up using the new interface most of the time, there will be occasions when we will prefer to toggle momentarily to list view. It's good to have options.

Also, its just occurred to me - are you planning on including a button for live preview? Actually, I wanted to request a much needed live preview for the touchbar. As of now, I gotta keep switching focus between BTT and the specific app I am configuring the touchbar for, which is very confusing and inneficient.

Please let me know if you want me to start a separate feature request thread.

The new UI will use normal menubar menus for many features like live view. I think that makes sense because it's searchable and allows to use the standard system features like assigning shortcuts.

I have added a feature that will show the (BTT) Touch Bar for the app that is currently selected in BTT (while editing). However that definitely has limitations if the Touch Bar is based on stuff that is only available when that app is frontmost.

Great! So it will be released together with the new UI? I'm not sure what kind of TB config is only applicable when the app is frontmost. Would modifiers fit that criteria? It would be great if we could toggle (select / deselect) modifiers for the TB live preview.

The Touch Bar will behave like when that app is active, so triggers with modifiers will show fine when you press the modifiers.

An example would be an activation group that's based on the window title. So if you configure triggers that will only show up for certain window titles, this won't work in the preview. The preview will just let BTT think that App X is frontmost.

Would you consider including on-screen click+toggle modifier buttons for the TB live preview? This would make it far easier to configure TB modifier states.

Sorry currently not, this stuff is already really complicated and I don't want to add an additional layer

However it works pretty well with this new "app" simulation.

I really hope you have found the time or will find the time to improve the clipboard manager with my suggestions.

Many thanks, and keep up the good work.

I’d like to keep my BTT touchbar active as I use it to edit a lot and present setup and help information upon installation of my presets soo, if a live preview is shown in the touchbar, it would conflict with these presets.

May I suggest showing the currently edited bar as a seperate window instead? You could click a button that shows what the bar would look like on-screen and format your triggers accordingly. Much like those apps that show a touchbar as a window.

(these apps just mirror the exact touch bar display)
But the preview will be optional.

Make sure to save the preference within the preset, so users don't need to flick something on when they install my presets in order to see the menus!

Yes preset users won't be affected by this anyways, it's only visible when editing Touch Bar items

You have always struck me as someone who is worth supporting, and you continue to do so. Thanks for including this! I've been holding off on renewing my license, especially since I don't have a Touch Bar, but I think once this new UI is released, I will go ahead with the renewal.

Ooh. This is intriguing. Is this new or has it always been there? This could save me a lot of clunky AppleScript that's checking for changes in the frontmost app and/or changes in the window title to set the visibility of widgets.

If there was a way to say that a group should be visible (without hiding everything else!) when a specific app is at the front, or when the app's window title changes to include a certain phrase, that would be amazing.

this is possible using activation groups. Just add one (like you'd add an app), then set the appropriate conditions on it.

It wqs introduced earlier this year

OK, thanks. I must have missed that. I'll investigate.

That is so close to being exactly what I want. Is there a way to specify where the conditional widgets appear?

The way I have things set up. I have a set of widgets on the right that are unchanging (clock, weather, battery). At the moment, I have app-specific widgets just to the left of those (but still in the 'right-hand' widget block. I turn these extra widgets on and off with a script that checks the frontmost app every 5 seconds and changes them accordingly.

The conditional group works fine, except that it puts the app-specific widgets to the right of my fixed set, not the left, which I would prefer. I just need to be able to specify whether the widgets in a conditional group go before or after non-conditional widgets in the same section (left, scrollable or right).