I'm a very satisfied BetterTouchTool user, thanks Andreas for this useful tool.

• While the clipboard manager window is active, is there a keyboard shortcut to go to the starred clips? (equivalent to pressing the star button next to the search field)

• Are there automatic keyboard shortcuts for each clip in the clipboard manager window? An example would be Command + 1 for the first clip, Command + 2 for the second, etcetera. That'd be convenient.

• I would really welcome an option in the settings to always paste as plain text (the Command + P shortcut would become paste formatted when this option is activated, or maybe add a separate shortcut to paste formatted).

• It would be great if you could make starred clips stick to the top, and be able to reorder them manually.

You can create shortcuts for specific items like this (using the "Paste Specific Items from Clipboard Manager" predefined action): 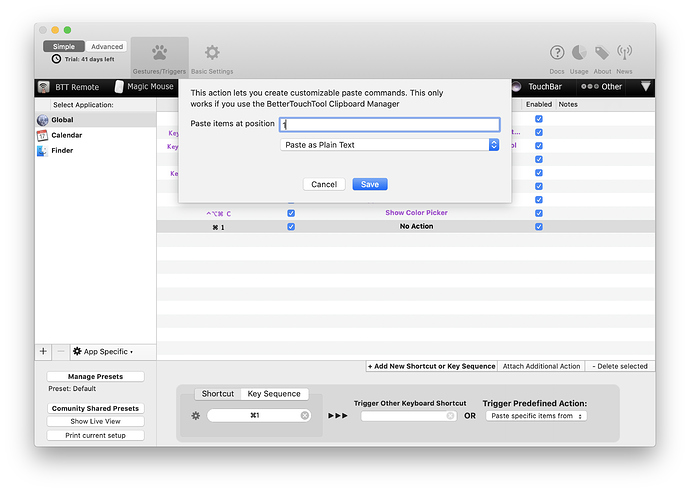 Your other points are all good ideas and I will update the Clipboard Manager to support them!

Many thanks Andreas, much appreciated!

I'll just remind about other clipboard related feature if an opportuinity happened - ClipMenu has the option to create a custom JS parser function, that'd allow to modify the entry format

So it's somewhat similar to "paste as plain text" but you can "paste with custom format"
and create a function in such format:

Sorry to resurrect this, but was this shortcut to toggle between starred / not starred items in the clipboard implemented? It would be awesome if it's supported.