I recently started experimenting with "Differentiate left/right modifier keys" to give myself more options, but noticed a couple of inconsistencies around the icons shown in the "Trigger Name" column when doing so: 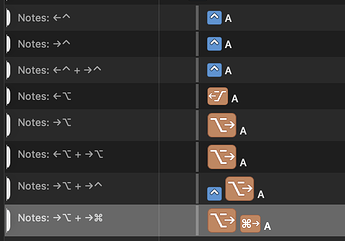 All of these shortcuts seem to work as intended according to the notes, but:

While the last point is just a minor irritation, the first 2 make it very confusing when scanning through the list of shortcuts. Is there any hope to look at this please?

*(These devices have no physical right ctrl key, but I have been successful in using the trick described here by @Frank1)

@frypf I am glad that right control trick works for you.

If you want to experiment with other options, you might also want to try these.

This is very useful for me, it might be useful for somebody else too. With BTT the Spacebar can act like the modifier Command (or Option or Control). Any Shortcut that works with „Command + letter“ works with „Spacebar + letter“. Let’s say you want to open Safari with den Shortcut „Spacebar + s“. Go to „Key Sequences“ (instead of „Keyboard Shortcuts) and record the following. To work best It should look exactly like that: [image] „Leertaste“ = „Spacebar“ Then assigne launch Safari to „Spac…