Hi, I'm curious about using BTT with Apple's upcoming Universal Control, which lets you move your mouse to the screen of another device to control it. For Mac-to-Mac control, I wonder whether we will be able to use gestures to trigger BTT actions on the remote device? How will it work?

I've used other remote-control apps like Apple's Screen Sharing, and Synergy/Barrier. The problem is always that advanced multi-touch gestures, like four-finger tap, etc., aren't sent through these apps. You only get the basic mouse and scrolling functions, and (if you're lucky) keyboard shortcuts. I've had to resort to complicated systems to send gesture information from BTT on the local computer to BTT on the remote computer, so that I can target specific apps etc. See my comment about Barrier for example.

Does anyone know whether the standard multi-touch gestures supported by macOS (three-finger tap for Lookup, three-finger swipes, etc.) will be supported on remote devices via Universal Control? Even if so, I have to guess that the raw information that BTT needs from the trackpad to detect the advanced, non-standard gestures isn't going to be available through Universal Control. In other words, you won't be able to have BTT running on the secondary computer, and control it just as though your trackpad was attached directly. Am I right?

If that's the case, is there any possibility of BTT automatically forwarding gestures to a remote instance of BTT, maybe using its web server, in connection with Universal Control?

We will need to wait until Apple releases the feature, I currently have no idea how they will implement it

Ok, I thought you might have tried it out already, it's possible to enable it in the Monterey beta: 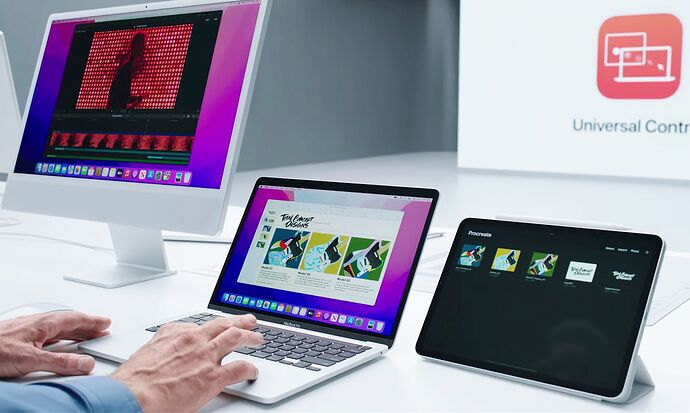 I haven't been able to find out if it works with Apple's multi-touch gestures though.

Well, I guess we'll have to wait and see. I'm surprised there isn't a better solution out there already for operating two Macs from one trackpad/keyboard. I've tried most of them, none of them work very well.

I am also waiting for this.
My workflow is heavily dependent on BTT and universal control is almost useless without BTT.

unfortunately with the current beta of universal control it does not seem possible to send programmatically generated events to the iPad. Maybe this will change with upcoming betas, I’d recommend to file feedback with Apple on this

Oh, I was not hoping for any BTT related stuff to be sent over to an iPad.
I wanted Mac to Mac controls.

That I have not checked yet, but will soon look into whether it has the same limitations!

The macOS 12.3 update with Universal Control is out now. Any news about plans for BTT to work with it, between Macs?

Unfortunately AFAIK Apple would need to update universal control. I don't think there is currently a way to make it work with programmatically generated events - but if I find any solution I'll update BTT.

When I connect to an iPad using Universal Control, and use some iPad gesture, the gesture is also sent to the active application on the host.

If there is a way to detect that the mouse/keyboard is currently used by another device through Universal Control, if would be nice if there was an option so BetterTouchTool didn't also send shortcuts/gestures to the host. That option should probably be on by default; sending shortcuts/gestures to both devices at the same time is a bit strange. But for shortcuts, if the shortcut isn't handled by the iPad, I expect some people will want it to also be sent to the host (unless there's a way to actually detect the shortcut wasn't handled, but I strongly suspect that's not possible).

Hi @Andreas_Hegenberg ,
In my case I use Mac to Mac universal control, and the Mac with BTT doesn’t register any commands. I feel BTT would only work in the host machine and not the secondary even if BTT is installed there, unless Apple does something about it.
Anyway just want to keep being informed in case it’s possible to use BTT through universal control.
I could test anything if it’s needed.

I am also interested in Mac <-> Mac universal control support. I have two machines on my desk and universal control allows me to share a single keyboard + magic trackpad between them. Unfortunately, it's still a frustrating experience as none of my BTT gestures are available on the guest machine. I'm heavily reliant on these customizations and hope there's some way to make them available in this scenario! I'm very happy to test or help in any way.

I'm in the same boat with insanityfarm. My Logitech mouse customisation does not work, so I bought a trackpad and BTT customisations don't work either on my second computer.

This is really slick and cool feature but we need to ask Apple to support custom gesture events for trackpad and mouse. It's a bit annoying that apple release 12.4 and still has not added support for custom events.

would love a very simple command to switch from a Mac to an iPad (and back). Not for mouse control but to control a reader on an iPad next to a Mac with keyboard command (mainly page up and page down).

First let me say that I couldn't live without BTT. This is such a game changer for using the trackpad. I am just curious if there will be support to have BTT running on two separate Macs with Universal Control enabled. Right now when I do a command (both machines have the exact same commands) it only triggers on the primary even when the secondary machine is active. Hoping it is possible to get this to work as I am barely functioning having to revert to keyboard commands when the secondary machine is active. Thank you for such a great tool!!!