@yuuiko hank you so much!

I just have 1 last question,

I'm not sure how do I set up game mode, I have both preset downloaded, but when I switch back and forth from Option -> Enable Game Mode or the other way around, it seem like BTT just disable both AQT and AQT Game Mode.

@jacquelinett,
I see a potential bug here, what way are you trying to call GameMode? - please be specific e.g. from what app menu so I can pin down the cause. Thanks!

Hmm, oddly enough I can't seem to press (and hold) Option and pick Game Mode anymore, which is really odd. I swear I could do it last night.

How would you switch to game mode without going to BTT and manually enable gamemode /disable BTT and vice versa?

I usually switch to gamemode via the control strip apps menu on v3, although i do admit it’s a feature I rarley use myself and it hasn’t been updated for a long time.

I entirley forgot that there where other ways of getting the gamemode button to show up (e.g. your ‘hold option’) so maybe those methods aren’t updated for v3.

Try using the buttion in the apps menu and see how that goes.

This is great! Two things, in your v3 beta, the prerequisite terminal fan controls installs for Game Mode won't install on Mojave. Also is there an easy way to swap all shortcuts for Safari to Chrome?

Could you please provide more detail on the fan controls issue? I'm running mojave and it seems to operate fine, though I didn't initially install it on mojave.

Thanks for your support!

Notice for Everyone using AquaTouch v3

@Andreas_Hegenberg has rolled out some much awaited BTT features that i've been longing to implement into AQT.
These features will add further quality improvements and bug fixes, but will require you to update using BTT's Alpha release stream.
BTT's alpha versions are also still in testing phase so it may add a bit more bugs. AQTv3 is also in testing phase too, so I guess we could all come together to help Andreas solve any bugs with the new features. More people = more tests!

The final version of AQTv3 will only be released when these new BTT features are released in it's stable release.

Has the True Tone toggle issue been addressed somehow?

@tmxgkh,
We're working on it here:

uhm where do we start? I guess we need to find a way to read the status of the TrueTone feature first. That's probably the essential bit. This conversation first started at:

DOWNLOAD
This update requires you to update BTT to v2.667 to update! Enable 'Update to Alpha Builds' in the BTT Advanced Settings.

Quality Improvements (requires the new features in BTT alpha v2.667, thanks to @Andreas_Hegenberg!)

let me first say thanks for your hard work! I'm just a few months on BTT and switched 2 weeks ago from GoldenChaos to your 3.2.beta .. took me a few days to get used to but the separate app controls are really nice! ..

just updated to 3.3 and aside better switching between apple nav and BTT nav a lot indeed has improved.

couple things I noticed right away:

In safari on a non-custom website (with restore last closed / ready later emoji) there are 2 escape keys next to each other.. and the (X) left or restore last closed is redundant with the new collapse button (>) on the main AQT interface (edit: Just noticed this also happens in my mail app )

I don't have school at 8.15 nor have math excercise 2C coming up in my calendar

Play pause button works with Netflix (safari) in now playing. it says " no supported apps playing currently" though and because I play it in safari i would expect a safari > button next to the safari toolbar.

that's it for now!

I'm glad you like the preset! thanks for your kind words.

Double Escape in Safari:
- I can't seem to reproduce this issue. Could you maybe upload a screenshot of this? (⌘⇧6 to screenshot the touchBar.)

X button appearing on extension sets
- This is more an aesthetic function rather than a purely functional one. The button allows you to identify the set as an extension set. Without it, it would look like it a full set. It's also there to make it look like its sliding out under the macOS control strip and overlaying the other controls, suggesting it is meant to only be opened temporarily, much like apple's native now playing set and call controls.

It's interesting that it's happening on your mail app. I haven't made support for any mail app so I'm wondering why this is. Can I ask what mail app you use and also a screenshot of this behaviour in your mail app?

Calendar
- lol, you probably understand that those are my tasks from my calendar and reminders. I'm not sure if you're just joking here or having a problem with these widgets though. If they're not showing up be sure to install iCalBuddy (link in the setup window).

Netflix
- Thanks for the report! I'll fix the 'no playing' message soon. I missed that

What did you mean by the safari > button? I don't quite understand that one.

Thanks for your reply! Glad you enjoyed it!

after a fresh start this morning the double escape button changed with some extra text.. here's a screenshot:

The calendar widget used to work, and still kinda works:
after clicking the calendar button:

X Button: I probably edited the mail part under the wrong option, I was talking about the double escape button..

Escape:
Ah yeh, the escape key widgets were probably just still thinking and sorting themselves out. Give them some time and they'll probably sort themselves out.
I plan to improve how they work in the next release

Schedule Widgets
ahahahaa thats funny. I changed their code to display that for the hero image photoshoot and forgot to change them back. Fixing it right away!

X button
ah, lol. Well now you know its there (i guess). It's mostly there to keep your context rather than a directly functional trigger.

Netflix
A Netflix safari widget isn't supported yet and it'll be hard for me to make one for it since I don't have an account and it isn't a free service.. I don't really know how it all works so i'd be designing blind unless I get access somehow!

Thanks for your replies!

will look into these.

This update requires you to update to BTT v2.667 if you haven't already.

Fixed bad schedule widgets.
• You’ve probably completed school and that maths exercise, so they’ve been fixed and you can see your own events again

Fixed ‘Nothing Playing’ message displaying when a Netflix video is running.
• also made it show a loading when it’s loading.

Safari Widgets don’t open the Safari AQT Bar automatically now. It was kind of annoying.
• Instead, the AQT icon changes to the site’s icon. (SoundCloud and Facebook don’t work like this. Still need to figure them out.)

Youtube Safari Widget.
• New PiP button. now you can pop the video out easily and procrastinate while working! (don’t do this) (hopefully it works, it’s kind of hacky)
• Improve the skip ad button. You need to enable youtube ad tracking for this to work for now. Still much room for improvement.

Added Missing Haptics to my secret developer tools in the welcome screen. Can you find them?

Notes:
• @Dom Escape keys in the CS will be fixed soon. I plan to redo how it updates it’s look.
• plan to integrate the skip ad function into youtube’s now playing widget once I get the good version working.
• Smooth Updating is coming soon.
• Outlook Support to be merged from @onaforeignshore

Hei @yuuiko ! How are you? I'm so sorry if in this period I've been a little bit absent but I'm sooo busy with my University thesis🤯 ...

I was trying your latest AT release during these days and this is what I noticed:

3.1 It seems to be bugged sometimes even on safari

4 When you open Photoshop, BTT starts with default preset, and when u click on AT button it changes to your preset

P.S. If you need any help with Adobe Animate preset I'm here! (during last few months it became my daily adobe app for work, so I could help you with it

I regret to say that I have a pretty serious bug to report:

When using AQT, some of my keyboard shortcuts stop registering. I have ⌘J bound to ⌥⌘← in Google Chrome (which is the Previous Tab) command. Similar bindings for forward tab and similar bindings in Safari all stop working as soon as AQT is loaded. I don't see the same issue with GoldenChaos for example.

Notably some of my global key bindings do work.

and also check if the button is actually switching bluetooth, or doing nothing. Also maybe your macOS version would help

Animate
I'd appreciate your help with animate! Give me a bit of time though, I'm still kind of too busy to implement new sets as of now. I'd probably Private Message you if I get up to it, if that's fine with you.

@bennyty
I'm assuming your custom BTT keyboard shortcuts are not working anymore.
Are they appearing in BTT?

You might need to move them into AQT if you've put them within/into GC-BTT, or if you've made it as a seperate preset, be sure that it's checked as active in the preset palette. (keep AQT as the master preset) 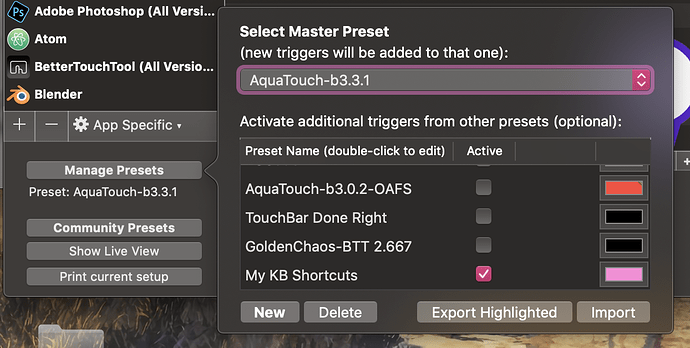 There has been a fix regarding keyboard shortcuts and activation groups in the latest alpha, maybe that solves the issue?