I still haven't been using my preset that much, but while I have I don't seem to be interrupted with as much bugs anymore. I guess they're subtle enough to be usable now!

Groups won't close when switching apps, even when the checkbox for that function is off.

You affiliate account should be active. Unfortunately my reseller doesn't support such advanced tracking, thus it won't be possible to account for extensions ;-( (Because it's not a subscription, for my reseller they are just separate products)

I was able to reproduce most things (only the missing icon thing not yet) and just uploaded v2.666 alpha, would be great if you'd try that

About the ctrl thing, do you maybe have this enabled?: 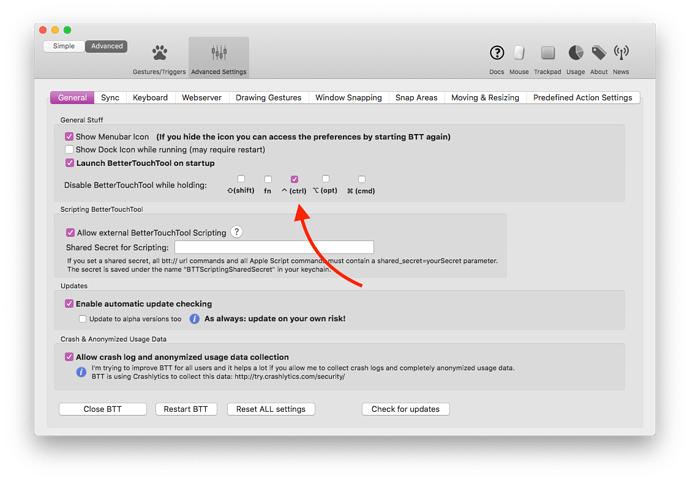 Promising Changelog! Will come back in a comment with my observations.

So i've been using it for a while now and since I thought it was smooth enough , i released a new AQT version.

Most of the bugs seem to be smoothed out pretty well, but the last one would be the blank BTT icon at times.

It's the same bug as before, but now that I'm observing it, it usually seems to happen after I wake from sleep (usually at the start of the day). Could you try reproducing the bug?

Also good implementation of the display order setting. It's very useful and i'm using it a lot.

I'd like to request an addition however, this would make GC's and my preset a lot slimmer and possibly run better, also easier to edit.

I know you've been focusing on the new UI, but if you have time for this then i'd be really thankful! (gone will be the days of copying 5 control strip items and escape key into every. single. groouuup, in every app.)

Feature added in BTT 2.667 alpha! You can now set 'display order' in every BTT trigger to prevent the triggers from mixing up if they're mixed in from CAgroups. @Andreas_Hegenberg, Could you maybe add something like this? [40%20pm%20copy] I'd also like if we could set display order to negative (-1), etc and decimals (1.2). i'd use -1 to set the hierarchy for left side widgets, and + for right side widgets. and the decimals to differentiate levels, e.g. 2 will be the Control strip, 2.1 will…

v2.671 has erased my persistent trigger settings! (show in all groups, exceptions in CAgroup)
@GoldenChaos, careful when you update.

what do you mean by "exceptions in cagroups"?
You are sure you didn't accidentally import an older preset?

I’ll check, but I’m pretty sure its the right preset...

Yes, it was the right preset. 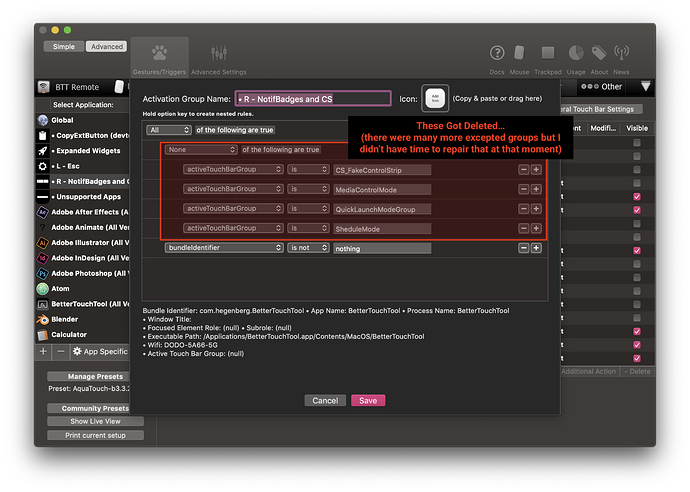 As a reminder, I'll bring the discussion from HELP: Applesciript Update_Trigger / Add a trigger to All Groups automatically here:

HELP: Applesciript Update_Trigger / Add a trigger to All Groups automatically

Also another bug, sometimes clicking a (i'll call them a persistent trigger, a trigger that has a 'show in groups' on) that opens up another group, it has trouble opening up.

It opens the group, but then it hides the BTT TouchBar.

When opening it up again, it shows the group open. but as soon as i close this group, the triggers disappear and it's nearby elements get weirdly misplaced. It doesn't fix itself.

When I close the messed up set, and then open the bar again, it opens up orderly again but without the persistent triggers. A few moments later they appear automatically.

Seen especially in my AQT safari sets.
download the problem preset in my previous reply

The video only seems to work in safari? try that if you're on chrome.

HELP: Applesciript Update_Trigger / Add a trigger to All Groups automatically

@yyuuiko can you maybe create a very simple preset that can reproduce this? I'm having a hard time following the steps and see what settings in the preset might have a influence

I've just made it. Here it is:
Persistent Trigger Bug.bttpreset (25.9 KB)

During it's creation, I noticed it was a conflict with the new Show MacOS, Hide Control Strip when Open. If the groups don't have this set, it works fine.

Here's what you're meant to see:

Things that shouldn't happen but do (Things to look out for):

this is awesome, thank you!

Good thing @yuuiko made that bug preset because I'm actually not getting that error on my end!

Small 'btw' comment for @GoldenChaos: Working on the window snapping!
Refined it's look a HEAP, it's animation feel and figured out how to do that edge mouseover!! 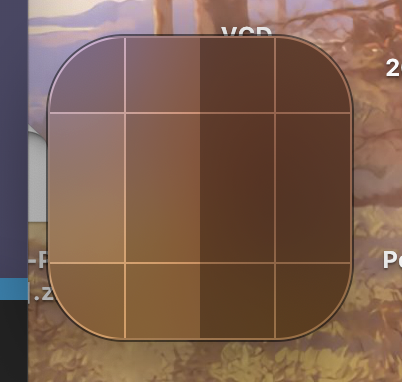 (Aw yeah edge mouseover!!! Thank you for doing that!)

(my mind is being twisted in so many directions... toplefttopright///)

@yuuiko I think I found the main issue that caused this behavior and fixed it in v2.673 ( just uploaded ). Your test - preset now seems to work.

//one more small fix related to closing groups in 2.674

Been using it a bit today, and i say it's been improved a HEAP.

I haven't used it enough to be sure that it completley works though, but it seems pretty good so far.

The persistent trigger doesn't show again as it's meant to, as seen when opening group 1 directly.

I'd also like to bring up an old issue that hasn't been fixed in a while:

I have just uploaded v2.675 alpha which should fix a few more issues and introduces new modifier options.

Only show while all these modifiers are pressed: This is the existing behavior, where modifier key buttons will not show at the same time with non-modifier key items.

For example if you have a button that should only show when CMD is pressed you'd configure it like this:

image.png1286×225 32 KB
If you want another button that shows always, but NOT if CMD is pressed, you'd configure it like this:

I think I'm getting confused with these options, haha. I set the primary menu bar buttons in my preset like so: 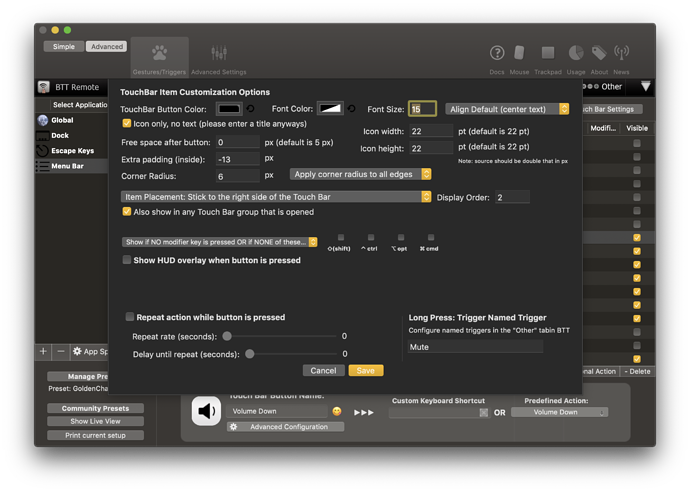 But they still disappear when I hold down any modifier key. What am I doing wrong?

Ah sorry, I didn't see the screenshot when I looked at it on my smartphone. Actually it needs to have at least one box checked because the idea is that you want to replace it with something else if another modifier key is pressed. (Otherwise you wouldn't need to select any option at all, because then it would be the default behavior)

So you would configure that for example with cmd + shift + option, then you can configure your other widget to only show when ctrl is pressed.

Here is an example (press ctrl to switch the right item):
example_modifier.bttpreset (18.2 KB)