THANK YOU for Capslock -> Hyper! A small request...

So glad I read the release notes - Capslock remapping to hyper is brilliant and has made me realise just how much latency Karabiner was introducing.

Is it possible to also have the behaviour where one tap of the key on its own maps to Escape, and then any combination with other keys it becomes Hyper? This is particularly useful in Vim.

That should be possible, I'll look into it for the next release.

Brilliant, thanks! And by the way thanks for the software in general - it's easily the best money I've spent on productivity software by far; at this point using a new Mac just feels weird & restrictive until I get BTT on it.

V 3.541 alpha is currently building and should be available in a few minutes!

It allows to specify a named trigger that is executed in case the hyper key was not used for any key combination: 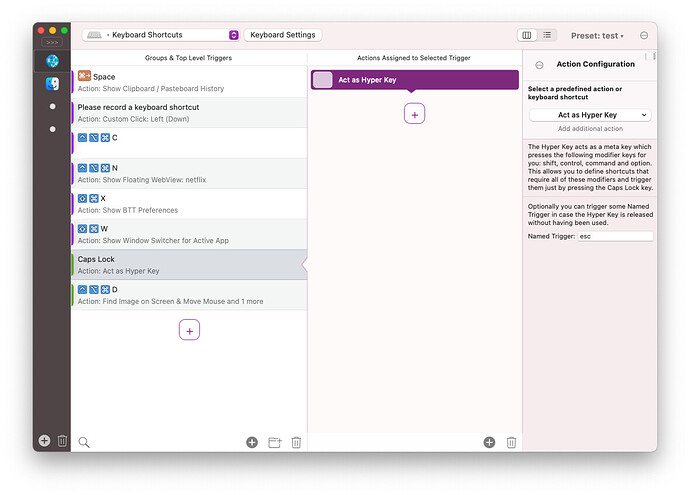 You can then assign esc to that named trigger: 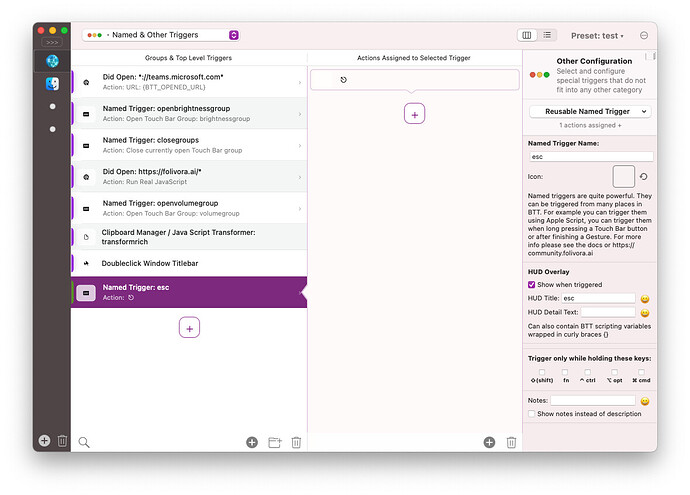 Whaaat that is insane! Can confirm it seems to be working great here!

And I didn't know about Named Triggers either, need to wrap my head around the possibilities there... again thanks so much for this

@Andreas_Hegenberg
Hello! Another person really excited about capslock -> hyperkey here. Pairing tap for escape is ANOTHER one of those features that has become commonplace with hyperkey users on karabiner, so this is an exciting development to see.

One last request on this that I would be absolutely ecstatic to see implemented is the option to act as Hyper Key (without shift). A shiftless hyper is another convention common among hyper key users since it brings that much more flexibility with the same infrequent hotkey conflicts for programs, with the added benefit of just adding the shift key right below for another layer of hotkeys.

Just registered to say thanks for implementing hyper key to capslock, even that much more excited to see tap functionality being implemented, and if Hyper (without shift) were added to the modifier keys this would be absolutely perfect!

I’ll look into that! The latest alpha already allows to pair it with FN, but I think I‘ll allow users to choose the modifiers the hyper key shall trigger.

Great to hear! I'm on 3.540 and was actually thinking of trying to pair FN with hyper, but in the zealotous world of home row pedanticism being able to pair shift with hyper would be perfect.

I tried. It had a few issues that I did not have with Karabiner.

Hi Andreas, jus wanted to check and see if this is something you're still looking to implement. I, too, enjoy the flexibility of a shiftless Caps Lock and would love to see this implemented in BTT!

yep this will be added soon!

Hi Andreas, any update here? I use Setapp, but I haven't seen an update since January.

Adding a modifier to caps lock, like Shift+Capslock doesn't appear to work.

Il like to remap caps lock as copy, shift+Caps as paste, ctrl=Cap as cut.