Persistent TouchBar buttons are a common feature in many presets, but are only made possible by having a duplicate of ALL the buttons in EVERY group. This implementation can greatly bloat the preset, drain battery (as widgets need to reload) and can be a pain to copy into every single group of your preset.

This issue has also been expressed in these suggestions:

The behavior in my preset for the app switcher and emoji widgets currently involves a performance-hungry workaround with tons of duplicate widgets to give the illusion that only the scrollable container's contents are changing. However, supporting this natively with left and right-aligned button groups would eliminate all of that duplicate code and make the preset a lot easier to maintain. Example of how the behavior works: [screenshot-2] The normal state of the touch bar contains a scrollab…

Wondering if it'd be possible to have sticky sections. Similar to @GoldenChaos, I'd like to keep the section on the right side while going into different folder groups. Be great if there was an always visible option or something similar? Alternatively, being able to select multiples at once to copy and paste would be great. Just noticed a little similar to: Therefore, my request is more so focusing on copy/paste.

@GoldenChaos's take on the issue focused on efficiency, while @liamb wants to easily reuse / copy-paste his persistent TouchBar Buttons.

I've just come up with an idea that I see could solve all sides of the issue: Priority.

EDIT: since BTT alpha 2.667, a 'Display Order' number box appeared. Though it takes a bit of trail and error to figure out how it really behaves, it's a much simpler implementation than my initial idea.
The only thing left to do is make that exclusion box!

Also a side note for @Andreas_Hegenberg, It's not really important but maybe the 'advanced' vs 'normal' configurations should be redone. As you can probably tell this feature would be 'truly advanced', while stuff like corner radius and colours aren't that advanced. Maybe these should be seperated, say into 'aesthetic config, advanced config'?

You can now set 'display order' in every BTT trigger to prevent the triggers from mixing up if they're mixed in from CAgroups. 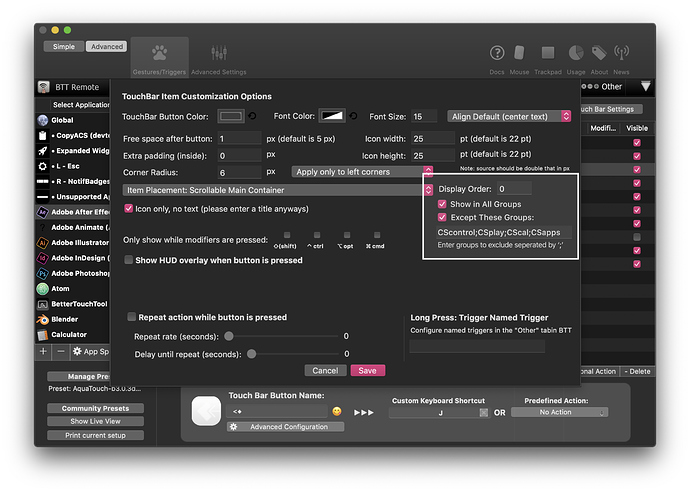 i'd use -1 to set the hierarchy for left side widgets, and + for right side widgets.
and the decimals to differentiate levels, e.g. 2 will be the Control strip, 2.1 will be any dynamic elements related to the control strip, 1 would be notification widgets, etc.