Window Switcher use tab to cycle through windows

Hi, I really like the new window switcher in Ventura!

Whats missing is the possibility to use the tab key to cycle through apps. Often I would want to press cmd + tab to quickly switch to the previous app, thats not possible at the moment.

yep, that's on my todo list. I'll allow to go to the next app by hitting the shortcut you use to open the switcher again. Should be ready soon.

This is now implemented in 3.997. Just make sure this checkbox is checked: 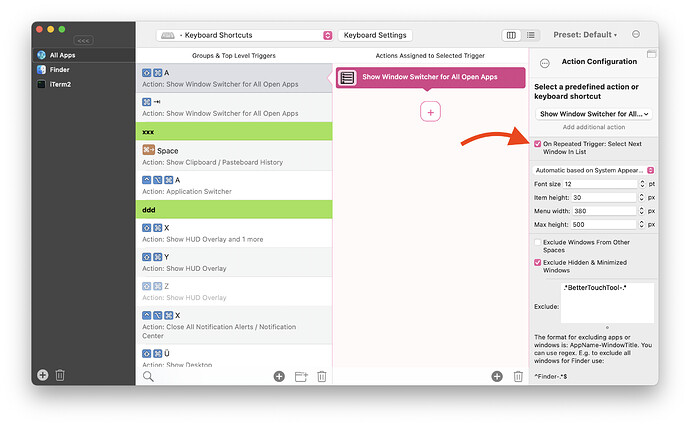 One small thing though: When I use cmd+tab to switch to another app and want to switch back it doesn’t work, it always selects Safari in my example:

the window switcher does not keep track of any state/usage, it always highlights the currently focused window.

Ok, thanks for clarifying!

One other thing I noticed: Other Window Switcher change to the selected window when the keypress is released. Do you plan on making this configurable? Thanks!

You can already configure this: 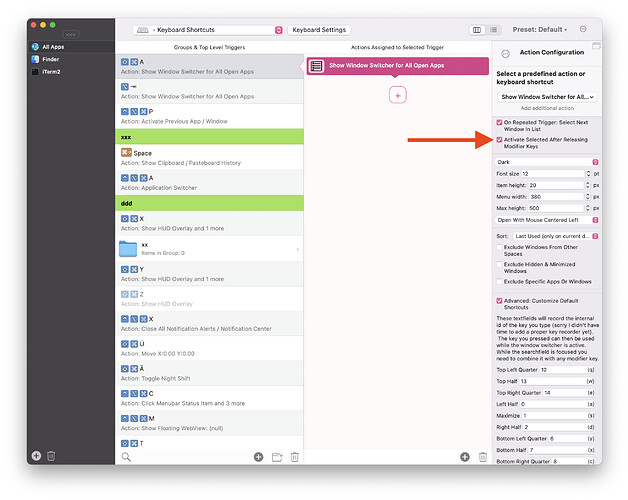 image2630×2092 485 KB
The next version will change it to only close if the search field is not focused anymore.

The latest versions now also sort by "last used" by default, as I have found a way to retrieve that info from the system without keeping state. (Only works for windows on the current desktop, others will be sorted alphabetically)

When I enable this setting I can’t search by name, or did I miss something?

The latest versions now also sort by "last used" by default, as I have found a way to retrieve that info from the system without keeping state. (Only works for windows on the current desktop, others will be sorted alphabetically)

Great work! I had been going to ask whether it would be possible to sort on window stack order, but it seems you've beaten me to it.

Could we have an option to show the menu in the middle of the current screen? Pinning it to the pointer is a bit odd when using keyboard triggers.

yes, will be added to next alpha!

Also, I have noticed that terminal windows don't appear if the current tab is running ssh or su'd to an admin account.

The next version will change it to only close if the search field is not focused anymore.

These are now also available in v3.9985. For going back up in the list you need to to configure a separate shortcut and assign the predefined action "Move Selection Up In Active Window Switcher"

Almost there, I think. Just a few minor glitches...

Is the broken square with dot suposed to identify the active window? It gets moved to the second window with Focus:Preselect second window in list. I don't think the icon is needed with Sort:Last used.

When 'Select the next window in list' reaches the end and returns to the top of the list, the first window is selected rather than the search bar. 'Move selection in active window switcher up' does select the search bar before continuing from the bottom.

The BTT config window closes whenever the menu is closed.

In the latest alpha I added an option to choose whether the search field or the list should be focused when opening the switcher.

I agree with your point about the square with dot, removed that for Sort:Last used.

When reaching the end of the list, it should now focus the search field!

This is now good enough to replace Command-Tab!

Better than other 'alt tab' solutions as freshly hidden applications or minimised windows do not stay near the top of the list.

The list flashes up briefly if the trigger keys have been released before it's opened.

Mhh maybe I can add a delay before showing the UI, but this I'll put in the backlog.

Changing direction having just reached the search box selects the window at the wrong end of the list (due to the 'next'/'previous' window being pre-selected).

Max height was supposed to be that, but for the first release it'll be fixed height. I'll rename it.

I also finally found a way to get the stack order on other spaces, so this is now also included in 3.9988

I've just noticed that the window switcher opens beneath any windows pinned to the top...

It's really great now! I have it configured like this:

This way pressing cmd + tab and releasing just switches to the most recent app, like the original switcher - but when I need them I have all those nice extras of BTTs switcher.

One thing I think could be improved is how one reaches the search field. This is something that https://contexts.co has figured out really well. Maybe add an option that cmd + tab followed by space moves focus to the search field?