I have a keyboard shortcut defined for "Option"+"N" to toggle night shift. It used to worked perfectly. I'd press the keys and it would simply go into night shift mode on. Press again and it would toggle night shift off. Now, it's acting "weird". Instead of toggling, it brings up a pop-up menu wherever my cursor is that has two menu values. Both menu values read "Toggle Night Shift". If I click on either one of the two options on the pop-up menu then it toggles. What's wrong? What changed? Is there a way to go back to simply toggling, and not having to click on 1 of the two menu items, which by the way are repeated, and both do the same exact thing, which is to toggle night shift. 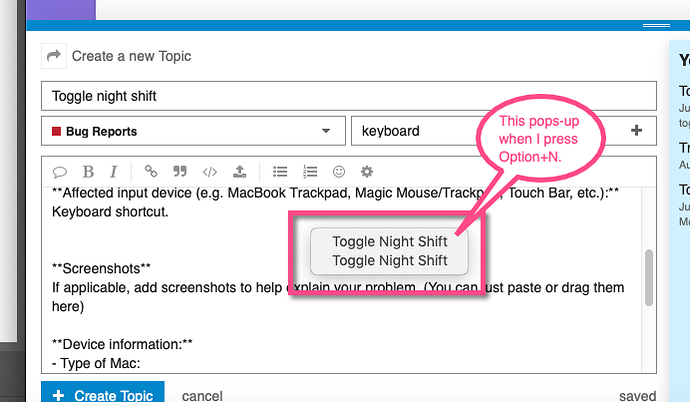 sounds like you have added the shortcut twice to BTT, is that possible?

I don’t think I did. But yes, it’s certainly possible. (I’m away from my Mac now. I’ll check.)
BUT, how does that factor into it showing a pop-up menu instead of simply toggling the feature? TIA, R.

if you add any sort of trigger multiple times, BTT doesn't know which one you wanted to trigger. So it shows a selection menu from which you can choose. This can also be used to generate custom menus.