When I open my laptop, I frequently encounter the spinning beachball at the login screen and a full system crash requiring a hard reboot. This doesn't happen every time I close and shut the computer, but it's usually 1-3 times each day.

I've tried changing quite a few system settings and BTT settings, including not putting hard drive to sleep and restart BTT on wake but nothing seems to solve the issue. I have also reset the SMC and NVRAM multiple times.

When I got this laptop, I restored from a Time Machine backup from my previous 15" 2013 Macbook Pro. Everything worked fine on that laptop but this one suffered this crash from when I got it. I have narrowed the issue down so it's definitely BTT as did a full uninstall and the issue did not recur for a month. After reinstalling, the issue has returned again.

I have updated BTT to the latest version and alpha version but the issue has still occurred on both. I have also updated MacOS during this time but that still hasn't fixed the issue.

Any fix would greatly be appreciated as I love this tool.

what system language are you using? (I think there was a system bug with some on-screen language keyboards that sounds similar)

I’d try upgrading to 10.15.4 as apple has fixed quite a few things that could be related to this

Thanks for the quick reply. My system language is English UK, with Simplified Chinese as the second language for business reasons. I'll disable Chinese for now and update to 10.15.4 and see if that makes any difference

That explains it! One of the runaway processes was TextInputMenuAgent. I do have Chinese handwriting support enabled. I take Chinese classes (against my will) and whenever I need to input Chinese characters I just draw them using trackpad input because I don't know the pinyin equivalent. (Yes I still suck at Chinese, haha) Should I try and remove those language input methods? I'm not sure if GC has input language whatever applets/widgets. Edit: Looking at the variables I see this: showCurrentL…

Thanks, very interesting. I have a handwriting keyboard installed as well, for the same reasons as the other user.

I've updated Catalina now and will see if the issue goes away. Thanks so much for all your help! 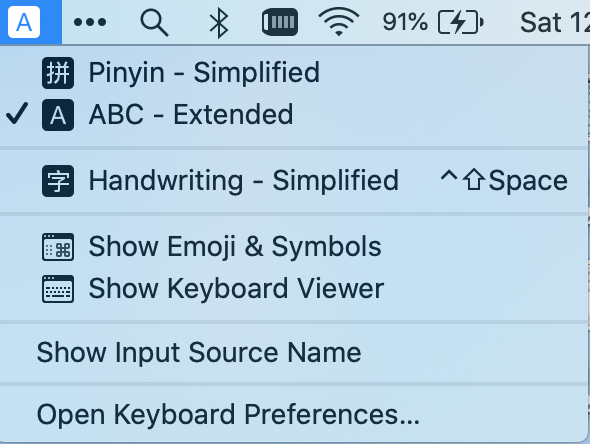 @Andreas_Hegenberg thanks for linking my bug report. I believe it's still an issue on the latest macOS Catalina. I had to just completely give up on the GoldenChaos profile as I needed the handwriting support once in a while and my Mac got unstable with all the forced reboots.

For what it's worth I don't think it's GoldenChaos's or BTT's fault - probably some API Apple made that's running into a race condition. Really hope there's a good workaround to it, though. Other than disabling support or removing the profile.

ah damn, I thought that had been fixed. Maybe I can add something that disables the handwriting when going to sleep and only enables it after waking again.

Same for me. I need to reopen BTT after sleep. But what is weird is that snapping (window max when I dragg it to the top) works, but without the supporting animation (overlay before release).

I have the same exact problem on my new 16 inch. When my laptop have been sleeping, it restarts and says there was a problem. I tried uninstall BTT, and it didnt happen. Any fixes?

that’s a different issue but most not related to BTT, many people have been reporting such crashes with the current macOS version and the 16“ MBP ;-(

So please report to Apple, I know that they are already investigating this.

Hope you are right, just finded it odd that the problem disappeared as soon as i uninstalled BTT. But yes, gonna contact them

sometimes these things get triggered by specific API use, but as far as I know the underlying issue is related to the graphic drivers.

If you see that error after restart again, please copy the crashlog that’s shown there. 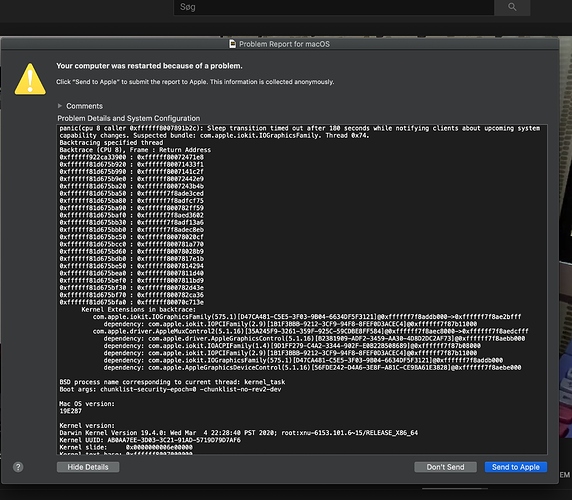 as assumed this one also says the suspected bundle is com.Apple.iokit.iographicsfamily. Some people on twitter were discussing whether it’s a driver bug in relation to external displays. I think it has been reported to Apple under this feedback id: FB7642937

That's not related to BTT, that's a known issue in Catalina, just google it.
on my 13" 2017 and 16" inch I had the same issue before installing BTT, also on the 16" the screen colors become different when opening the lid.
It looks like the problem is related to hibernation process.
Disable Power Nap in both battery and charging supply from energy saving option in system preferences.

A little update. I got a replacement last night, installed BTT, and unfortunately I waked up to a laptop that have restarted. Maybe it's a issue with the 16 inch and BTT. I dont know, but god it's getting annoying.
Power nap is off ofc.

I'm pretty sure you will also get this without BTT from time to time. It's a general issue with 10.15.4 and the 16" MBP and AFAIK Apple is working on a fix - which is probably delayed due to covid....
Some people on Twitter mentioned the 10.15.5 beta contains some fixes for it, but I don't know how effective they are

I have all the problems mentioned above on my MacBook Pro 16" - my system language is English but I have Simplified Chinese for a second input language. Waking from sleep frequently results in all inputs frozen (keyboard, trackpad, touchbar, external BT devices etc) for anywhere from 5 seconds to 2-3 minutes each time I wake. And lately I've noticed my laptop crashes while it was asleep.

What if I disable "Restart BTT after wake from sleep"? I'm willing to manually restart BTT each time if I can avoid the lag each time...

I have this issue almost daily, some days more then twice. Open LID and system was rebooted forcing me to login using passcode.

I have read disabling Power NAP may help. I have disabled Power Nap and it has seemed to help. I have gone days, if not a week without this sleep/crash.