Snapping to all 4 corners sometimes is erratic

Suppose I have four different apps. I snap one to the top left-hand side corner. Another to the bottom left-hand side corner. The third to the top right-hand side top corner. And finally the last and fourth app to the bottom right-hand side corner. It works for a while. But then, sometimes when I switch from one app to the other, one of the windows will snap itself not to the top/bottom, whichever side it was snapped to, but actually to the whole side, not just the corner. This has made the functionality of being able to snap four apps to the four corners useless for me. Since I then have to re-snap the misbehaving app, which will not stay in the corner where it was and will insist on reverting to the side only, and not the side/corner.

It works when I first snap them: 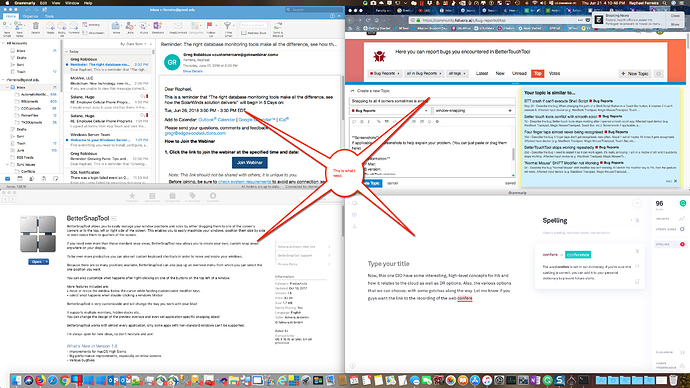 But then as I click on each window, the window I click on auto-snaps to the entire side. Here:

OK. I tried posting another image here but I got the "new users can only post one 1 image." error. So, I guess my description should suffice.

Yes... I have... (Attempted restart.) I am a Database Administrator. So trust me, I know what I am doing...

(Without wanting to sound smug).

Aside from that THANK YOU SO MUCH for an amazing product!!!! Best,

Unfortunately I haven't heard of such a problem yet. However it could be some app incompatibility. Does it happen with specific apps only? Do you have other apps that use the Accessibility API (i.e. that are listed in System Preferences => Security & Privacy => Privacy => Accessibility)?

I don't think it's a general issue, otherwise I would already have been flooded with e-mails

(also there haven't been any recent changes to the snapping code, I think the last modification of that was done last September)

Thanks much for the prompt reply. Usually, I'm using Outlook, a browser, and the other two apps vary a lot. But it is consistent across all my Macs, and I imagine all versions since I got your product. A few details more: I use, (and abuse) Spaces. Meaning I have a total of 7 different desktops on all my Macs. (It helps me separate e-mail+browser in one space, Database Administration in another, an occasional RDP connection to a server, Onenote in its own space, iTunes all the way at the last space, and some other programs in different spaces. But the 4 apps I'm trying to snap to the corners are all in the same first space. I usually do that when I need to demonstrate something to someone on one screen, especially in a web conference. I don't know if Mac spaces may mess up your code somehow.

But here is a more likely culprit...: Since I am working on a Mac, but I am a DBA, as I said so many times already (need to stop that lol), I also run Parallels Desktop (current version is Pro 13). So, I always have 1 or more Virtual Machines running all the time. In "Coherence Mode" I don't even see ANY of the Windows interface at all. All I see are the Windows programs, running on my OS X destop, as if they were native OS X programs. Yes, sometimes I use your tool to snap those programs to a corner. I do not recall if the problem happens only with those apps. But I will test and let you know.

In the meantime, have you had experience with Parallels Desktop and its compatibility/incompatibility with your tool?

And yes, I have some other apps using the accessibility API:
BetterSnapTool (yours)
BetterTouchTool (yours) (THANK YOU!! I finally got rid of that annoying command+H hiding windows instead of calling up find and replace)
Blackboard IM
Dropbox
Flexiglass
KeyboardCleanTool (yours)
Snagit
SnagitHelper
Synergy (allows me to control two computers in the same network with 1 keyboard)

I'm currently not at home but will look into it tomorrow!

Quick note: if you are running BetterTouchTool you do not need Bettersnaptool. Also unfortunately parallels has always been problematic but I haven't checked the latest version yet.

Andreas, I just wanted to drop a note and let you know that as of now, after I upgraded to Parallels 14, and also upgraded to Mojave, final version (from the betas), all is working smoothly. I am not experiencing any issues anymore. Thank you once more for your incredibly well designed and implemented software. Best, Raphael.

I find Bettersnaptool's interface a little easier and more powerful than doing it via BTT. Are there disadvantages to having both tools loaded and running at once? Would you recommend I switch fully to BTT instead of running both simultaneously? TIA. Raphael.

In general it's better to only run BTT performance wise. It's not a big difference, so don't worry too much about it.