Hello. I've been a user of BTT since I can remember (just found an email from 2012 about a feedback I posted back then). I've tried, i've really tried, but it just gets more annoying. I can't like the new settings UI.

The original is so simple, everything is just there, in the new one you have to go thru menus and buttons for things that were at just a click. Why changing them after all these years?

I know I can set the original as default, but I can't be alone in this!

Did you have any specific issues with the new UI? As far as I know it's still a work in progress.

(I advised some aspects of its design)

I want to make BTT work better, and to be honest, (no offense), but though the new UI is much better to use and edit with, it's performance and stability is not that great. Here I'll gradually add a list of any hassles and bugs I encounter while using BTT heavily to upgrade my AQT preset (which is quite big and advanced). Who knows when this list will end, but I hope that one day it will be empty! @Andreas_Hegenberg

Sorry for the brute force "fix bugs nowwe" mood of this post, I just …

After almost a year the feedback has constantly been great, but I definitely understand that there are some people who still like the old one, especially after using it for many years. For the old UI I received e-mails complaining about the usability and complexity almost every day - these are pretty much completely gone now.

Especially for new users the new one is definitely much better, the UI related support requests have been so much lower since it was released.

Maybe switch to the list view layout if you don't like the column one - it is more similar to the old UI. 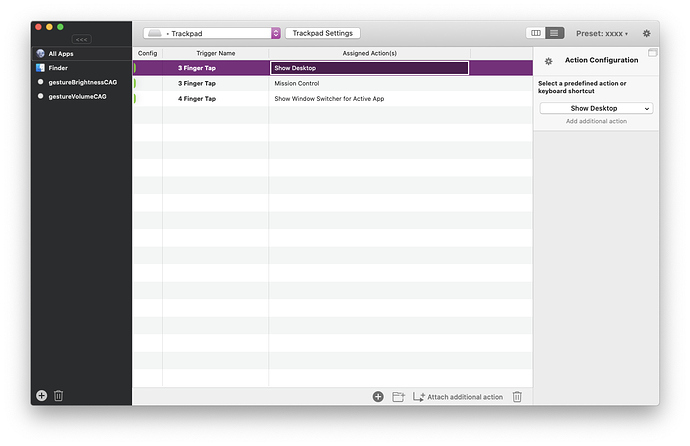 The old one is definitely not coming back but I'm always open for improvement requests for the new one. Most things now require significantly less clicks, but if you find something that takes more than previously - let me know and I'll have a look.

Hi Andreas, thanks for the kind answer, I'm just asking for the option to use the older UI that currently resides in the menu, to not be removed in the future or to be available as an option at least for oldies like me.

It won't be removed as long as macOS supports the UI concepts - but some of them are quite old (I started BTT on OS X 10.5 and Apple has deprecated quite a few of the APIs since then, therefore it is pretty likely that a new version of macOS will kill it eventually

I don't really know about macOS development (i'm a web developer myself) but just out of curiosity, what do you mean by UI concepts? Is that an specific, old UI API ?

Yeah, basically everything used in the old UI has been deprecated and superseded by new technology. For example:

There are tons of such things that really add up. Additionally the old UI was developed while I was really new at macOS development and its structure is too complicated to maintain - which was a big reason for me to develop the new UI.

In web-dev-terms: It's like switching from AngularJS to Angular 2