Implement gesture to switch between a menu and a action view

Allow to add custom HTML/CSS/JavaScript to the BTT Notch Bar (makes custom widgets very easy to create, they can use the full functionality available from BTT's floating webview).

This is absolutely fantastic! Cannot wait to give this a try!

Hello! Are we able to try the notch thing out? It says beta but it's greyed out. Can't select it. I am using M1 Mac Pro 14 with notch.

you dude are a freaking genius ,seriously ,i usually dont pay for software but im so glad to help such a talented and awesome dev !

could you implement notchbar only at the left of the notch ? where all modifications/windows options are.
so we could have the hour,control center,and other elements such as battery,SOC temperatures visible,and the notchbar elemtens on the left only.

also will you make notchbar mirror touchbar ? for example when typing ,we could get words suggestion/correction,as well as color slider in final cut pro,etc,basically touchbar features ported to notchbar by mirroring touchbar behavior

i think that's because its rly beta.currently its not even implemented in our public versions.he only made space to show the new notchbar menu within btt

Sorry I keep moving the beta release, but it should really be available tomorrow

what about my request for having notchbar only on the left? is there a place where i should make the request?

what about my request for having notchbar only on the left? is there a place where i should make the request?

sorry messed up with quoting lol

hello,any news on the alpha build ? been 2 days ehe

it still is grayed out for me lol

A first alpha with Notch Bar support is now available. It's still a very early state though!

i see you didnt implement the ability to have both menu bar and notchbar at the same time,yet? or it doesnt work for me?

also right clicking doesnt switch between notchbar and menu bar,instead it just opens a menu/right click with many options ,one of which being to disable notchbar /enable it .is that the exepcted behavior?i thought right clikcing would suffice 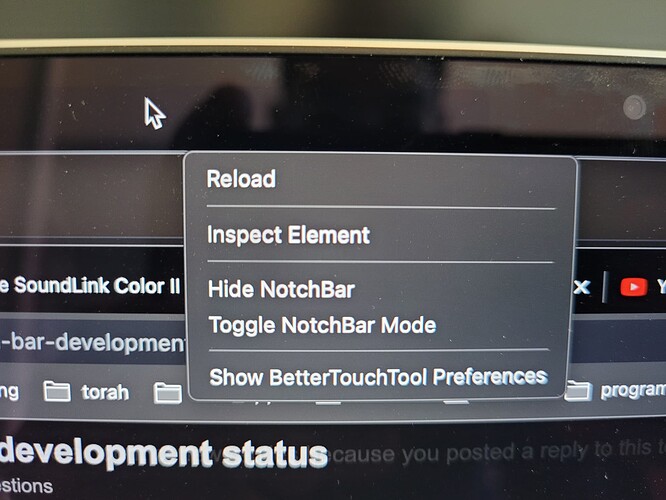 You mean having the Notch Bar only on the left? I will add more options like that soon. However you can already make it show the standard status items on the right side (by default just scroll up on the Notch Bar to show them)

about the menu bar on one side only,current implementation is actually perfect for me at leat !

ah i mean show mini menu bar is currently grayed out for me (and also its only shown in other screens,not built in,dunno if thats the expected behavior)

oh ye right ill see a shortcut ,because notchbar is conflicting with swish,i think thats because u implemented notchbar area as an app/window

i must add that menu bar + notchbar(or as u call it,mini menu bar) is much more intersting on the buil-in screen given the size of the menu bar in the new mbp lol,the menu bar is thicker on my mbp 14 than it is on my 27" monitor

Yep, it's specially made for the screens with a Notch

Only for these screens the mini menubar makes sense because on the others the menubar is just not high enough.

What happens when using swish?

so to confirm ,despite of btt scheme showing mini menu bar,its stil not available,but when it will be,both the built in and external will have mini menu bar?i just dont understand why the mini menu-bar toggle is only present in external screens settings(albeit its grayed out so not rly usable either),and not in built-in lol

as for swish ,maybe you want me to send a short video ?(idk if thats possible here )

ok basically ,when trying to perform the gesture on the notchbar,the two fingers up/down will call swish and mess things up as u can see .and that is,even tho the menu-bar gestures are disabled in swish.the only explanation i can see is that swish sees the notcbar as a windows,and thus tries to apply swish gestures (moving up/down) 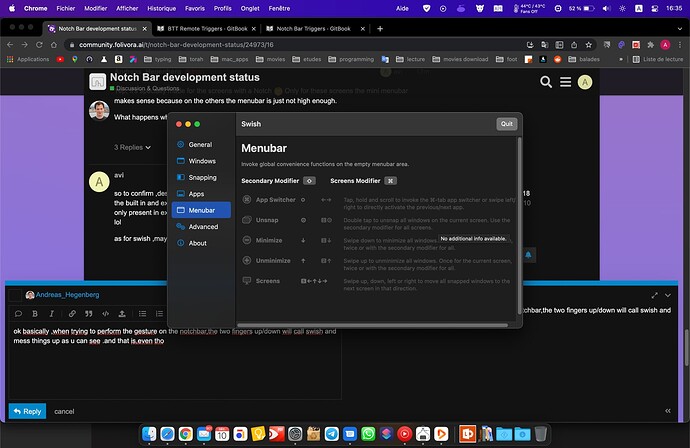 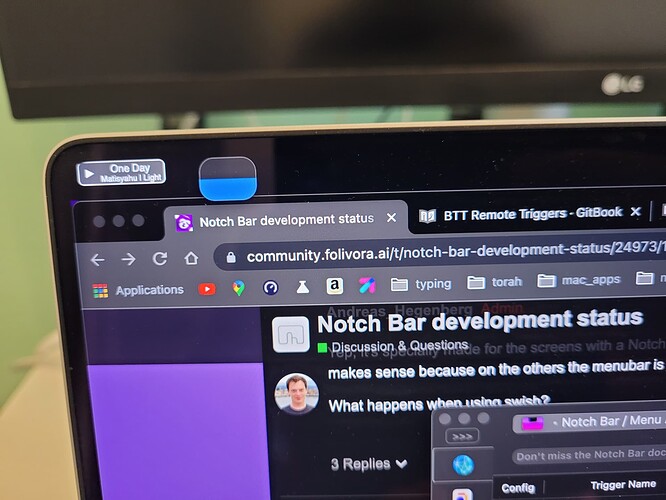 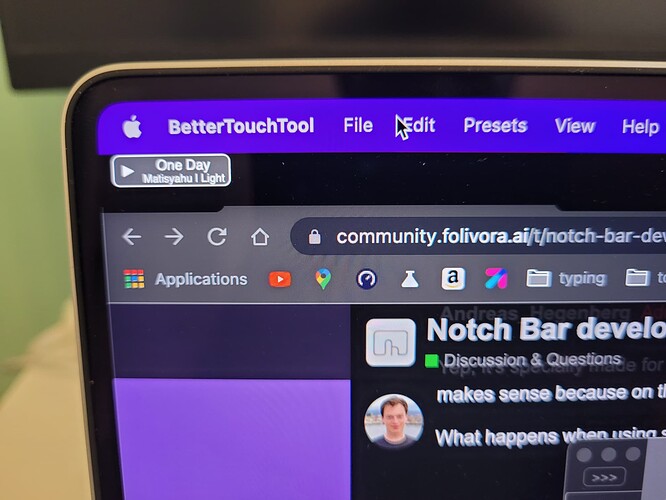 Help!!!
When I was in the NotchBar Mode, I had nothing on the left bottom.
Besides, when I click the status icon on the right botton, there is no action.

Maybe the implemention have not been done yet?
Or maybe it's the problem of language?
Because I've found that when I was in language of Chinese, the notch bar setting cannot be seen in the standard settings. After changing to English, it works, the setting stuff can be seen.
Maybe my 'nothing on the left bottom' issue makes the same sense?

if there is no menubar and the status items don't react it sounds like there might be a problem with your Accessibility permissions. I'd try to delete BTT from system preferences -> security and privacy -> privacy -> Accessibility. Then add it again. (Make sure BTT is quit).

but it could also some language issue. I'll try with Chinese later today!

@avi the latest alpha should now contain the "Show mini menubar" item for the the Notch Display section. Something got mixed up in the previous alpha. I'll have a look at the swish issue tomorrow.