Describe the bug
A clear and concise description of what the bug is.

I noticed that when using the play/pause button on my external (Windows) keyboard connected to my mac, the Now Playing widget will sometimes vanish and not reappear, or will flash briefly and then disappear. I'm not sure why this is, just wanted to alert you to the issue! I know the widget is new, and an alpha feature, but I'm loving it already!

EDIT: This appears to mostly be an issue when the Widget is set to disappear when not playing, the other options less frequently have the issue.

EDIT EDIT: The "Bring App Into Focus" option also appears not to be working at all when iTunes is closed.

EDIT #3: Having iTunes and Spotify open simultaneously seems to be an issue too, even if only Spotify is playing music.

same issue. pausing a track while the widget is enabled will hide the widget, and playing the track again will not make it reappear. widget only reappears when a new song starts playing. even "do nothing when paused" will still hide it.

I have made some improvements in 2.611, this is still alpha but seems to work ok for me now.

I'm still noticing the glitches with my external keyboard, although things seem to be working well with the built in keyboard/and BTT touch bar buttons! The external keyboard has its own play/pause button, which I've noticed isn't visible to the BTT keyboard shortcuts, I don't know if this makes a difference. Let me know if I can do anything else to clarify the issue more, but otherwise the widget looks awesome!

im still having this issue after the latest udapte

yes something seems off about the updating. i get the update window showing me to update 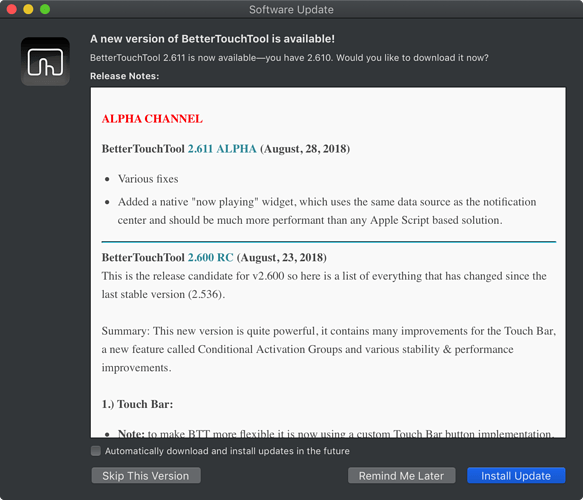 i follow the prompts, but then it only installs the previous build. 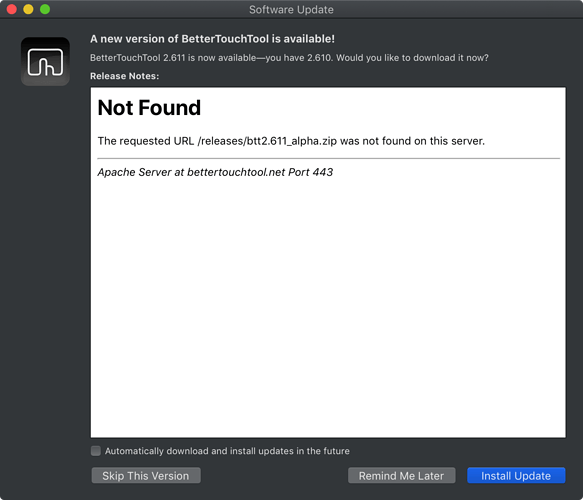 Should now be working.

i am unfortunately still having all the same problems i was having before. still can't get it to reappear after pausing without switching tracks. tried all the options for what to do when paused. they'll even show up paused and then disappear when unpaused.

But only if you have "hide when paused" activated, correct? There is a known issue with that which I'll fix in one of the next alphas. 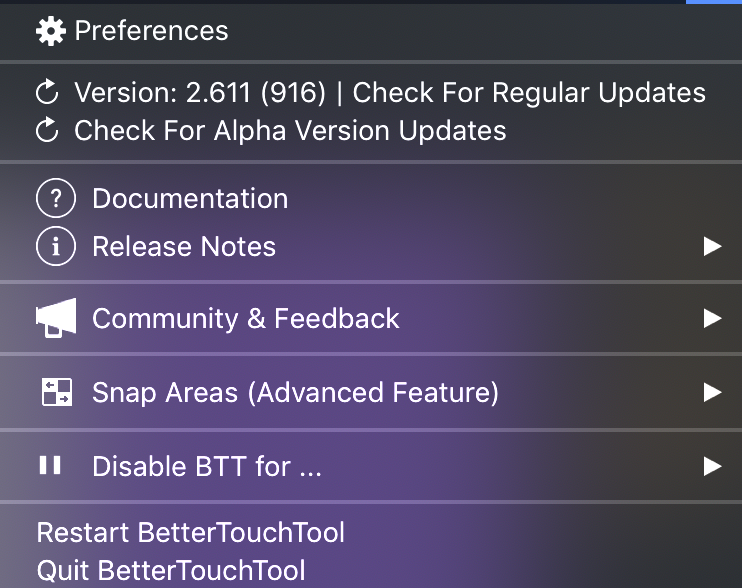 Very weird. Well, I have just uploaded 2.612 where I added a text alignment option and changed a little detail about the hiding/unhiding. Maybe also try that, although I don't expect it to solve your issue.

some progress! when returning from the paused state to play it'll briefly flash the widget before disappearing again

Ah, I just discovered something where the system would skip a notification sometimes. Maybe that's happening more often on your system for some reason.

2.613 does seem to fix the issue! displaying the play button or another icon is a little buggy, it remains in the widget if the track is playing or paused, but displaying "Paused" works perfectly!

edit: spoke too soon. just happened to me once, but 9/10 times it's worked so far

edit 2: using the widget as play/pause it what makes it disappear. but using another play/pause button either on the touchbar, keyboard shortcut, or in the iTunes app is fine

I was sometimes able to reproduce it, but only when running it outside of the debugger - which makes it hard to debug

Did some more changes and now at least on my system it stays visible. (2.614)

Hi Andreas, very happy with BTT, but after the now playing feature has arrived (its great though) when I click my weather folder (your own widget), whole BTT crashes

Also running Mojave, going out of sleep, I often have to restart the app to make it work (even though it is running)

Remove the 6. and 7. day forecasts, apparently the API does only return 5 days for some locations.