Is it possible to make new layers using BTT

Hi! I wanted to ask this since on my PC, I have made caps lock a modifier key to a layer that replaces WASD to arrow keys, so I don't have to move my hands as much. I was wondering if this is possible on BTT?

I was going to say that I think it should be possible with the 'Advanced Conditions' section of the 'Trigger Conditions'; but I just had a look and there don't seem to be any advanced conditions for checking the status of keyboard modifiers, caps lock, etc (which was a shock and a bit of a let down

Not sure if there is another way to achieve it off the top of my head, sorry.

Just had a bit of a further look, and it seems that you could potentially use the 'Toggle Presets Enabled/Disabled' action and apply it to the 'Caps Lock' key.

You could then create a new preset named something like CapsLockWASDArrowKeysLayer: 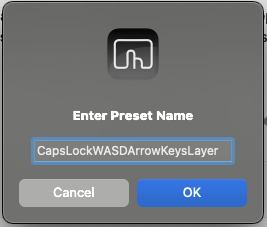 Configure the caps lock shortcut to toggle it on/off.

And then within that new preset, create standard keyboard shortcuts for W, A, S, D that assigns them to the arrow keys.

I haven't specifically tried it, but I believe that should then allow you to have that 'layer' toggled on/off when the caps lock key is pressed, and should get the functionality you're after.

I'm not sure if this is the best/most efficient/easiest way of achieving it, but at the very least I think it should work.

I think @frank1's approach for remapping capslock to right control, then using keyboard shortcuts that look for right-control is the most reliable way to do this:

Alternatively, in macos remape caps lock to right control. Then tell BTT to distinguish between left and right modifiers. Here is an example. First disable hyperkeys Then go to: System Preferences▸Keyboard▸Modifier Keys. Set „caps lock“ to „ctrl“ [image] It does not show it, but now „caps lock“ is the new physical „right control“ key, which you don't have on your MacBook keyboard. The „left control“ key remains what it was. [image] Create the global shortcut "right control + j" to open …

Thank you! I'll check it out!

Thank you as well! I'll see which of the two answers work best for me.