I have 2 showstoppers when using Hyperkey (set to Caps Lock in my case):

Note: I never had similar problems when I was using Karabiner before this.

are you using the hyper key with shortcuts configured in BTT?

very weird I haven’t seen anything similar yet. However I have only tested the feature on Big Sur so far.

I am having similar problems. I have been restarting BTT to stop the "locked" Hyper-Key.

I saw this today on Big Sur.

I'll jump in with some weird behaviour on my Mac. I removed the Karabiner setup I had before, and went BTT with Hyper Key setup.

One trigger is a Keyboard Maestro global menu (Hyper + A), which works fine. Another is just pressing the Hyper Key alone (in BTT setup as a named trigger, that triggers the combination Ctrl + Alt + Shift + Command + §), which brings up an Application specific Keyboard Maestro palette. This also works fine. A third one is NvUltra's shortcut for bringing the application to the front (Hyper + N); works great.

I have the same issue with the arrow keys.

I'm using Keyboard Maestro to activate various macros as well as conflict palette (thank you MacSparky!). The Hyperkey with any letters work fine, but using it with the arrows doesn't. I also use the arrow keys to manage windows.

I haven't found a workaround other than assigning my window management macros to a letter instead of the arrows.

After thinking about it more, I believe I have the same issue: only Hyper Key + Arrow Key is non functioning. Everything else seems to work fine.

have you tried configuring these shortcuts in BTT and then teiget keyboard maestro via some other activation option? BTTs hyper key works best if the shortcuts are configured directly in BTT

Ah I didn't mean to reconfigure the window snapping functions in BTT but instead to call Keyboad Maestro vom BTT.

For example you can trigger Keyboard Maestro using the url trigger: 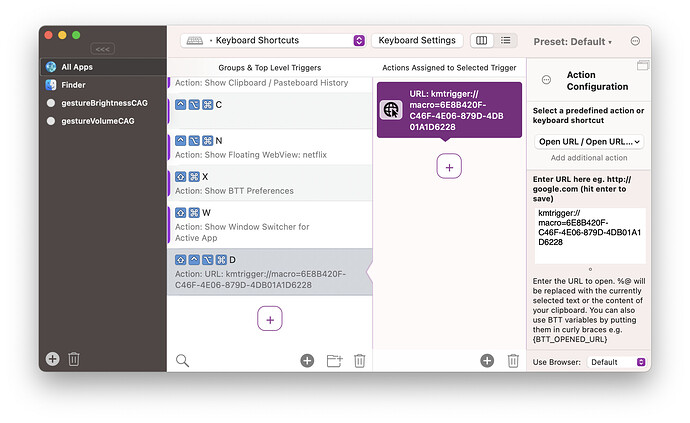 Edited, see below.
For now, I have changed the Moom shortcuts (Hyper + Arrow Key Up to maximize, H + Left to move window to the left, H + Right for the opposite and H + Down to restore window size) to Hyper + I, J, K and L respectively. This works great, but optimal would of course be to be able to restore the arrow functionality.

Edit:
I tried this, and it works fine. But it would be nice to be able to keep window management (both popovers and keyboard shortcuts) in one app. 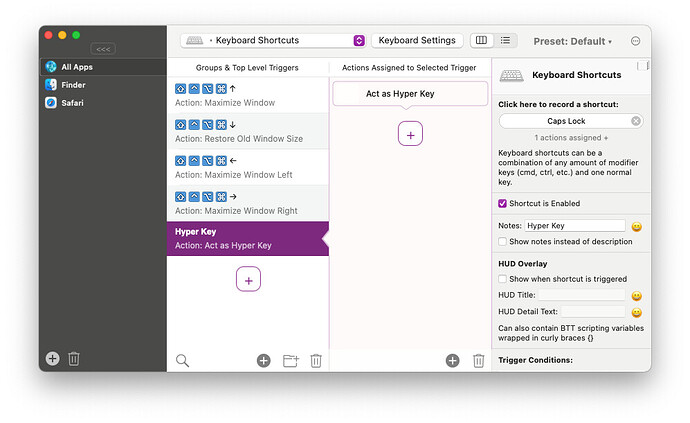 I've tried what you've suggested here, with a simple Caps-Lock M trigger that runs a Keyboard Maestro closing the side windows in OmniOutliner.

However, after opening the side windows, it consistently requires two Caps-Lock M presses to work. The mouse cursor flickers once on the first press, and on the second press, the top of the window and right side menu (inspector) flickers badly before the menus close.

But to be clear, your suggestion involves building a trigger in BTT for every Keyboard Maestro macro that uses the caps lock? (I have over 100 across all my apps, and it might not be worth it.)

P.S. I'm using the second line of Keyboard Maestro's "Or by URL" window in the BTT "Open URL" action-- is that correct?

I've been having the same issue as well every since I moved off of Karabiner. Pretty much every time I ran a shortcut that used the hyper key in BTT, the hyper key would get stuck and I'd have to hit capslock 2 or 3 times to deactivate it.

Crossing my fingers, but I think I might've found a solution.

Just remove the hyper key shortcut and re-add it.

I'm having the same (or similar) issue as @taulars describes. When I press Caps Lock acting as a Hyper key it freezes up my keyboard entirely more or less every time, making the shortcut unusable. I had similar issues on my previous Mac but only occasionally. Only way to fix it is to repeatedly hit Caps Lock and hoping it will work.

Is there a reliable fix for this behaviour?

v3.615 should fix the hyperkey issues

Thanks for such a swift response. Indeed, the update seems to have fixed it

I am trying to use Hyper-J, Hyper-K, Hyper-L, Hyper-; as substitute for arrow keys (respectively ← ↓ ↑ →). I then use BTT's "Repeat assigned action while pressing" to simulate holding down the arrow keys. The intended action is like this, the cursor moves:

This is indeed what I get when I do ⌃⌥⌘J, ⌃⌥⌘K, etc. But when I do Hyper-J, Hyper-K, etc. what I get is the cursor stopping after about 0.5 second, until I press the combination again:

Why is Hyper-J etc. not acting like ⌃⌥⌘J etc.? All shortcuts are defined in BTT.

Even trying to rerecord the Caps Lock as outlined in help is non-functioning. Has been working well up until this morning. I did verify that the Caps Lock is not remapped in. the keyboard settings.