This I think appeared with the most recent update and I have no idea why. It doesn't seem to do anything that I can discern.

Which one are you talking about? The first one is @GoldenChaos's logo; you must be using his preset.
The second one is the BTT logo. I'm pretty sure you can hide this in BTT's preferences.

Ah, it must've come with the latest GoldenChaos update yesterday. I couldn't tell where it came from until I went into Bartender and saw it associated with BTT, and it doesn't seem to do anything. I'll check in the GC settings to see what this is.

If the menu bar item isn’t doing anything, first make sure you’re on at least BTT 3.392 and, if you are, just restart BTT to fix the issue!

It’s supposed to be there! But it should also have a menu appear when you click on it. See the screenshot in the latest release notes for what it should look like. Is that not the case for you?

I clicked on it and nothing happened.

Are you running the latest alpha of BTT? You need to be on at least 3.392

@GoldenChaos when exporting the preset you can enter a minimum version, I think that could help prevention confusion

I actually already do this. However, BTT doesn’t actually prevent users from installing the preset on the wrong version, and the “wrong version” alert looks identical to the other two alerts you have to say “yes” to in order to import the preset.

It’s pretty clear that, because of this, users are not reading the alert message and are just saying “yes” to everything. The minimum version should therefore be more strictly enforced. I feel very strongly that BTT should not allow users to install the preset on versions older than the one I specify in order to prevent stuff like this menu bar issue.

Instead, I think that BTT should offer to update itself to the correct version and then automatically pick up the preset import process from where it left off before the update - either by finishing the import automatically, or by prompting the user to replace their existing preset version. There should be no option to continue the preset import on older versions.

If you make this change, I will also be more rigorous with version testing and setting the minimum compatible version. This can ensure that people who have expired BTT licenses can still get the best version of GC that is compatible with their version, all the time. When the new sharing site is out, which I assume will have single pages for all versions of a preset rather than how it’s separated right now, it might be good to use this data to automatically select the correct version of a preset to auto-import based on the version of BTT the user has installed. I imagine you could also use this to power preset auto-updates.

Finally, regardless of this change, the entire process of importing needs to be reduced to a single dialog box. When there is more than one, people skip through them and ignore the contents of all the dialogs, which is really bad. I’m guilty of this, too, and that’s led me to accidentally import things I didn’t want to.

Hopefully this helps you improve the import UX!

Thanks for your help. I have upgraded my BTT to 3.392 but still have no luck.

Guilty, I did import the new Stable GC preset, without updating to the latest Alpha BTT version.

But therein lies the rub, The GCC preset is set to "Stable", while the underlying application is still in "Alpha" testing mode. It's great that GC updates so quickly, but this may be something where the expectations collide, and some middle ground should be found?

I'm trying to make this one dialog and do not allow imports if the minimum version is not matched. Would be great if you could test v3.394 alpha.

I still need to show these warnings and some info about the settings override, which makes the dialog relatively big. 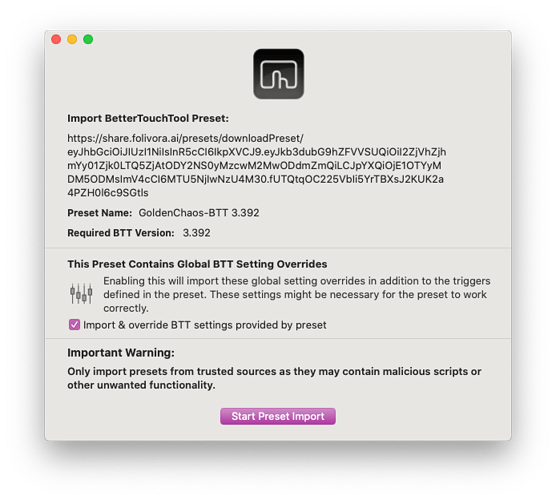 I'd appreciate any ideas to make it simpler while still maintaining the same info ...

This is exciting, I will post my own design for this dialog shortly

Also, I just want to throw this out there: It would be a lot more intuitive if BTT presets behaved more like Safari extensions and required copying to a custom preset in order to be modified. This would allow auto-updates to presets to work reliably. This would also allow me to define some metadata for my preset, such as an icon and banner image, that would add branding to the dialog and make it look much more official. This metadata could be defined by me in the eventual preset sharing site, which could essentially run like an extensions gallery. Honestly, you could literally bill BTT as “a macOS extension system” at that point and I think it would be pretty accurate haha. I’ll make some mockups of this extra idea too.

Metadata is already possible with the current presets (e.g. adding BTTPresetInfoURL to the JSON adds a custom URL that is shown as an info button the import view) BTTPresetBrandImage adds some image (but it's not yet rendered, I haven't decided on the allowed dimensions yet.)
You'll be able to set these soon with the upcoming sharing platform update.

I think I don't understand your Safari extension like idea yet, what would be the difference to now? Not replacing items the user has copied to his own preset when auto-updating? 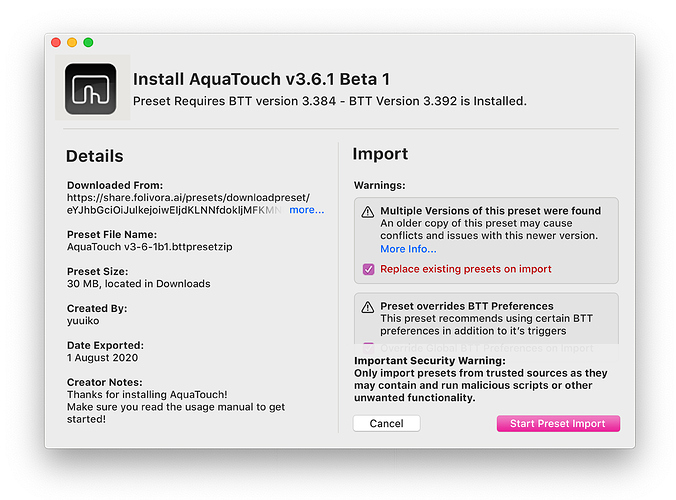