I've never gotten used to the new UI with the dropdown to switch between BTT sections instead of proper buttons. I know buttons aren't coming back (sadly—there's tons of empty space in my window), but may I suggest an option to at least disable and thus hide any sections the user doesn't need? Myself, I have no interest in either Stream Deck, Normal Mouse, Siri Remote, BTT Remote, Midi Triggers, Drawings/Gestures, the Notch Bar or probably even All Configured Triggers. Yet those options crowd the dropdown which then often gets shortened due to lack of available screen height, so I have to scroll just to even see the section I want to switch to. Highly cumbersome, a constant annoyance. And no, I've never gotten used to using keyboard shortcuts either—I can't remember them, I often hit the wrong one, and some are physically hard to press/reach for me. (Ironically, having a row of alway-visible buttons would make using keyboard shortcuts much easier, both to remember and quickly recall them...)

If I could just disable all the sections I don't need, I'd be left with 6 instead of 14 (!) and at least the dropdown would not require scrolling most if not all of the time. And I'd be surprised if many users actually use more than half of the sections BTT has.

Sure, there would be the question of what to do with configured triggers in a disabled section; but when disabling, BTT could just warn that the triggers will be disabled too until the section is enabled again. No confusion then. And also no change to the default UI that people see.

Ideally, I would love a configurable toolbar (like in most standard Apple apps) to simply put the section buttons I need wherever I want them. Then the dropdown (as one removable item in the toolbar) could be eliminated entirely by the user, still with no effect on BTT's default appearance and behavior. But I guess that would be too much too ask. But a simple ability to disable unneeded sections shouldn't be too hard to implement, I imagine...?

Are you aware that BTT works within itself? You don't like the default shortcuts? Change them. Or build your own custom menu with only the sections you want, so you have all the others "disabled ".

This for example is such a menu ... you can make it as nice as you want 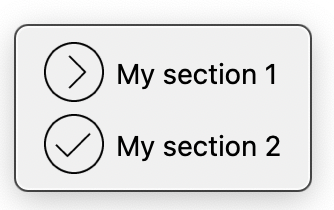 Unfortunately there is always a compromise. The old UI allowed to hide sections and guess what? People constantly forgot they had hidden some sections and complained about it later.

I like Frank‘s approach, maybe I could even add some dedicated BTT UI triggers - I’ll think about that.

Are you aware that BTT works within itself?

It's not just that I don't like the default shortcuts—I don't like using shortcuts at all to change to another section. Also, I wouldn't know what shortcuts to use other than Cmd + 1 and so forth, and I can only comfortably reach 4 or 5 of those with one hand. But I need 6 or perhaps 7, as explained above.

Or build your own custom menu with only the sections you want, so you have all the others "disabled ".

I've never built a custom menu. I presume that's not exactly a two-minute job. But anyway, another menu is precisely what I don't want—there already is a menu for section changes and that's what I don't like. And a custom menu would almost certainly not be in the place where it should be: in BTT's toolbar. Plus questions on how to easily trigger it without interfering with other functions etc. while staying as simple as possible.

Generally, I'm not a fan of building something on top of another thing when the original thing could much more easily be improved. (If my faucet often gets stuck, I repair it—I don't add a second faucet next to it to get my tap working properly again. ;-))

That said, if you could point me to an example of how to quickly build such a menu, I'd be happy to at least try it out.

The old UI allowed to hide sections and guess what? People constantly forgot they had hidden some sections and complained about it later.

Well, I can see that. But a) that's easily solvable when people ask (which the issue of the cut-off dropdown is not), and b) it should be easy to add some visual indicatior that sections are currently hidden. Perhaps a warning triangle next to the dropdown (click on it and it says "Some sections are hidden, do this and that to show them again") or even a full item in the dropdown—still better to have one warning item than to have 7 or 8 unneeded items.

I presume that's not exactly a two-minute job.

Right, it's maybe a 5 minute job

The general problem with the old UI was, that the „people asking stuff about simple things“ got to a level that I couldn’t handle anymore. I was basically stuck with responding to emails and didn’t get to the fun parts anymore. With the new UI the flood of mails and support requests has dramatically dropped, even though there are now many more users than back in the „old ui days“.

For example, I think you are the first one in ~four years to request this feature. (I might be wrong)

But I think I could offer a trigger that allows to e.g. open a custom context menu when pressing the drop down button - allowing you to replace / customize the current menu.

Maybe the new „all configured triggers“ section could also help you.

I still understand... only partially. Ok, you want no shortcuts, no menu, no notch bar. But what do you want if you can't have your desired solution at the moment? Could you imagine having 5 menubar icons for your favorite sections? They would only be visible if the BTT window is open. You could click on it and go to directly to your desired section. This could then look like this and can be done quickly. 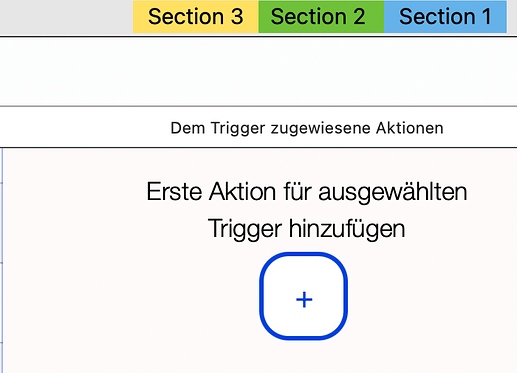 But what do you want if you can't have your desired solution at the moment?

I've tried a custom menu and while it's not bad, there's the issue of how to trigger it. If there were a "Right-click on BTT's toolbar" trigger that I could attach it to, that would mean right click → hold → move to desired section → release. If @Andreas_Hegenberg could add such a trigger, that would be an improvement. (Also, it might be of benefit to other users for entirely different purposes—currently the toolbar has no right-click functionality at all, a custom menu from there could contain all sorts of useful shortcuts.)

Could you imagine having 5 menubar icons for your favorite sections?

Generally yes. Is that the Notch Bar menu bar replacement, though? If so, I've tried that, but it's extremely laggy and unreliable on my machine, and I would have to use it for all apps (I presume).

If there were a "Right-click on BTT's toolbar" trigger that I could attach it to, that would mean right click → hold → move to desired section → release.

There is something similar

Thanks. Unfortunately I need that to zoom windows. (I tried disabling the system's feature and configuring BTT to zoom when double-clicking the title bar, but BTT invariably crashes when I do that.)

Configuring a right click for the popup button is also already possible: 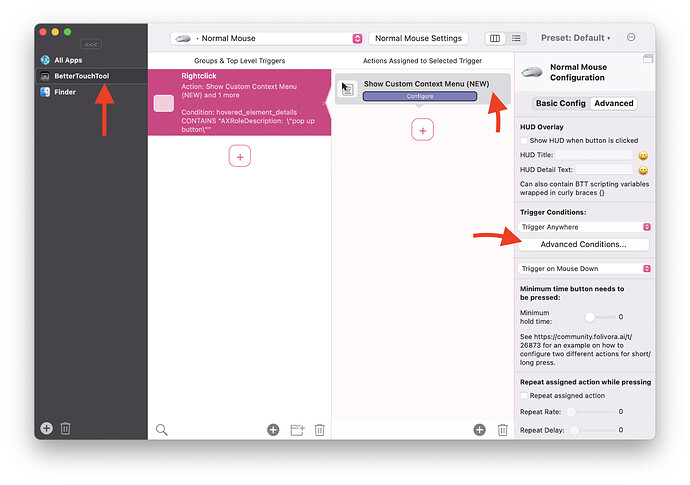 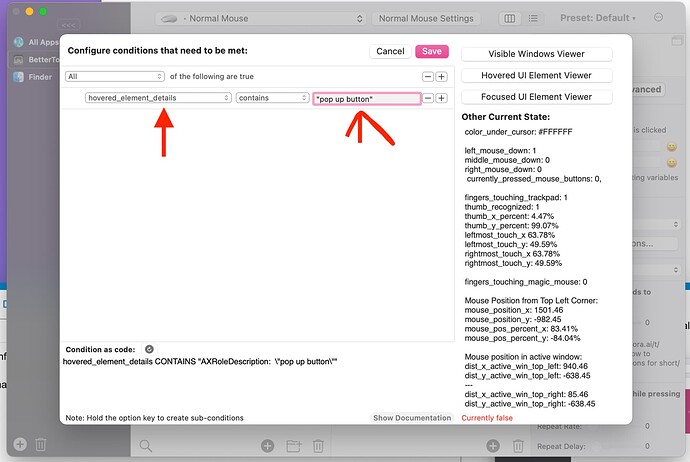 I tried with this condition:
hovered_element_details CONTAINS ""pop up button""

(even a left click would work to completely replace the existing menu, but then the condition would need to be a bit more specific because currently it matches all popup buttons in BTT)

Ah, fantastic! I never knew the "Normal Mouse" section also applied to the Magic Mouse. Why is there no right-click trigger for the Magic Mouse directly? (Or left-click, for that matter...)

as the condition and that's pretty much exactly what I want!

Just one question though: when I open the custom menu with right-click-and-hold, I can't actually select anything in the menu until I let go off the click. It would be even easier if one could click-hold, move and release (like in most standard macOS context menus) instead of click, release, move, click, release. Might this be possible somehow?

Edit: Correction: It does seem to allow the selection during click-hold at least some of the time (not sure when it does and when it doesn't), but even then it won't action the selected menu item when the click-hold is released—you still have to click a second time.

Now that the normal mouse section has some advanced features I should add the left/right click to Magic Mouse and Trackpad as well. I'll think about how to integrate that best.

I think I never tested the hold & select use case for the custom menu, maybe I can fix that but I'm not yet sure.

//edit: actually it seems to work if you use the new "long press" functionality. It just needs to be a value > 0 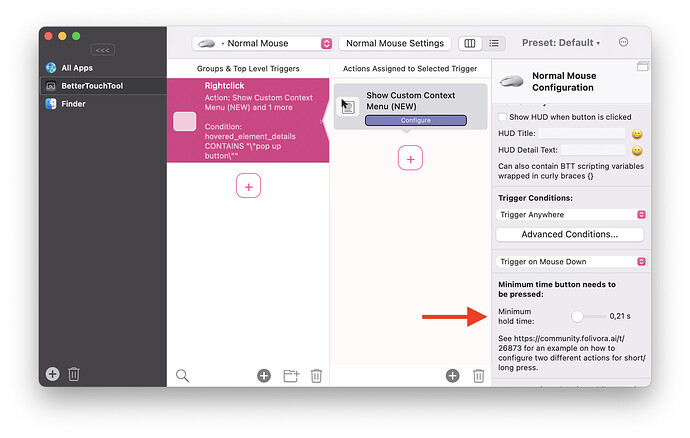 Great. Thank you! And thanks as well to @Frank1 for your ideas.

Just one more thing: Short of the actual selector popup, I don't believe there's currently any other way of switching to a given section than sending BTT the default keyboard shortcut. This works fine for a custom menu, but changing the default shortcuts gets weird, especially when you want to still use Cmd + 1 etc. but in another order. Also, it's not really a change then but more of a second shortcut, and the default shortcuts are still displayed in the popup. If these actions were available as proper BTT actions, you could just ship BTT with the default keyboard shortcuts configured in BTT itself, like you would for any other app, and you could display the proper shortcut in the popup.

(... unless I've overlooked something.)

Yep, I'll add an action for switching sections, that should be easy to do. (see the previous post edit for a solution to the hold & select issue)

I don't believe there's currently any other way of switching to a given section than sending BTT the default keyboard shortcut.

The default shortcut yes, but you don't have to notice it.

Since I'm the one with the weird ideas....

I can think of two things

//edit: actually it seems to work if you use the new "long press" functionality. It just needs to be a value > 0 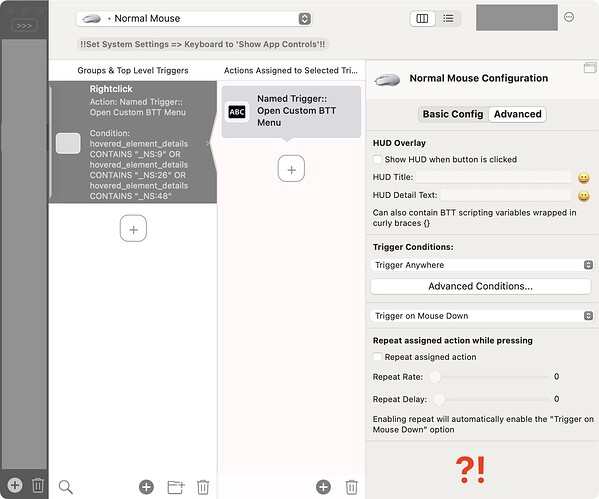 Do I need to switch to the latest alpha?

ah yes that was just added today with the new alpha

Ah, @Shnub You've probably already done what you wanted to do. Just one more hint. Next time you want a custom menu, but want to do as little work as possible, have BTT build it for you. I don't know what this menu is officially called, I call it "conflict menu".

If you assign the same trigger to several macros, BTT doesn't know which macro you mean and shows you a menu to choose from. This doesn't look very nice, but it's done quickly and serves its purpose.

I find this " feature" interesting to group several macros that somehow belong together, but of which I do not want to remember every shortcuts. (eg the sections in BTT) I know, you don't use shortcuts, but that also works with mouse triggers. 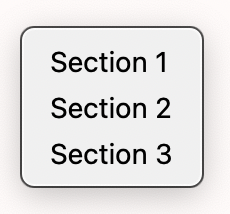 @Andreas_Hegenberg Have you ever considered expanding those conflict menus? Maybe BTT could pick out a unique "single key trigger" from the names that could be used to trigger the macro. In the example above, 1, 2, 3.
I know, no one but me would probably use that.