Describe the bug
After updating to the new Developer Preview 5, all background colors in the TouchBar Buttons are switched to the default grey and can't be adjusted.

Screenshots
All buttons in this bar have black backgrounds in the BTT settings but appear like this and cannot be changed.

unfortunately this seems to be a bug in DP5 not in BTT. Other apps suffer from the same issue (I checked with iTerm 2).
I'll check if there is any workaround.

figured as much but wanted to submit the bug report just the same.

thanks for the quick response!

I'm currently implementing a workaround with a custom button. I had wanted to allow custom font colors and sizes anyways. So there will probably an alpha with working background colors on DP5 tomorrow.

In case anybody wants to try: https://bettertouchtool.net/releases/btt2.541.zip

This version is pre-alpha quality, but colors should work again (Although Apple has already confirmed the bug, so it should also soon be fixed by them).

There have been MANY changes in the background to make BTT's Touch Bar functionality more flexible in the future. It's very possible I broke something

Giving this a shot... wish me luck

EDIT: Yeah this is too broken even for me, haha

pretty much every text setting for every button was totally reset, and nothing stays docked to the left/right.

EDIT2: Progress! I just reimported the latest experimental version of my preset since the update nuked what was currently there. Direct Import from the site crashed the app, but I was able to import the downloaded bttpreset file and things look MUCH better, though the spacing between things is a little wonky:

EDIT3: Worth noting that the weather widget spits out the following error ONLY on the Touch Bar (not in the preferences window) (a restart fixed it, weird)

thanks for being adventurous!

A more stable build should be there by Monday.

I changed a LOT, so it might influence speed a bit, but not sure. (The complete data model changed and apparently I still have some bugs in the migration process - this caused the issues you saw)

Awesome, I'm gonna play around with the padding and see if I can make things look acceptable.

The corner radius option is nice, but to do anything with it I'd need the option to set each corner individually (this way I can make a group of buttons look like a segmented control). Is that possible? Perhaps something like CSS where I can type 6px 0 0 6px?

EDIT: It's clear that I should NOT be altering the padding because the spacing seems to be a bug.

EDIT2: The cause of the bug seems to be the space after widget. If it is set to 0, BTT is instead using the default value of 5px. My workaround for now was to set everything with a 0px after-widget spacing to 1px.

Alright, I've got everything pretty much back the way it was

For the brave folks who downloaded the pre-alpha: GoldenChaos-BTT Pre-alpha.bttpresetcompressed (2.2 MB)

Cool! I have also updated & replaced the build above to not destroy existing configs

@Andreas_Hegenberg heads up that this build seems to have a bug that eats certain icons. Re-adding the icons, even if they are different images entirely, doesn't seem to matter. They get erased whenever BTT restarts. See: Spotify, VLC, Safari, and Things widgets below. 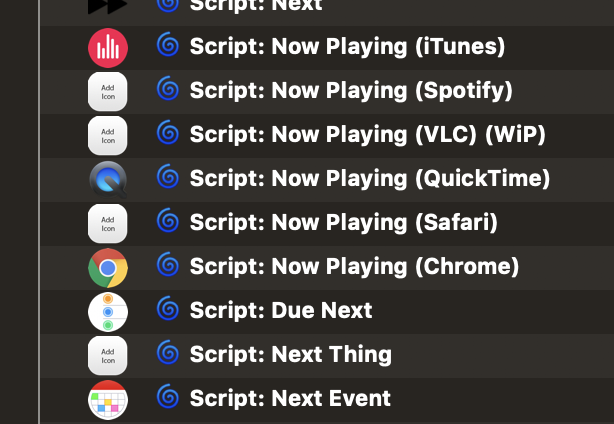 Weird, do you know whether this started to happen right after importing the json, or later after changing something? (I can't seem to reproduce with the preset you posted above)

Actually, I think this has been happening since the last version, 2.536. I just didn't report it at the time. As far as I'm aware, it happened following the update. Not sure how to get it to reproduce on your system, though.

Very weird, I can't seem to find any place in the code that would reset the icon data on a restart. You don't have any scripts that try to update the widgets, correct?

It would be great if you could go to the about tab in BTT and click the "export debug information" button. This will create a folder called BetterTouchToolDebug on your Desktop. Sending that to andreas@folivora.ai should allow me to reproduce it.

Here you go! And no, I don't have any scripts that try to update widgets. Also, it's always the same widgets that get their icons reset.

Strange even with that it seems to work fine here.
Do other changes correctly save across restarts? (otherwise it could be some sort of file permission issue)

Yes, other changes save fine. Just not these. Maybe if I just remake the widgets entirely... I'll try that tomorrow. I'm beat for the day, haha.

Here is another development build for now:
https://bettertouchtool.net/releases/btt2.542.zip

Hope to have the alpha available tomorrow. DP6 fixed the background colors by the way.

Just finished installing and DP6 has a lot more polish to it. DP5 had to be the worst beta this season, glad it's over haha.

Will report back with any issues I find in 2.542

EDIT: I haven't found any significant issues, and adding animations is awesome, but this particular animation is definitely the exact opposite of what I think people (including myself) are asking for. This transition makes things on the Touch Bar feel slower. I would disable it completely or make it a per-button-group option. There are definitely times when I don't want a transition, such as when using the option menu (where some of the content on the Touch Bar stays the same).

If a fade is the only thing that performs well enough, don't do a crossfade, instead quickly fade completely out and in. That gets you 80% of the way to the native effect, I think.

If you make a way to define custom animations I can make a few defaults for you! I don't think this is a one-size-fits-all thing for every button group.