Are there any other new features? Thanks!

This release is really just about the Stream Deck. It also prepares various things for the floating menus, but they are not yet included.

Ah one little feature: conditional activation groups can now activate based on the connected screens resolutions.

It's got a lot of great features so far.

I'm very happy with some of the flexibility that the hybrid option offers. For static button displays, I can use any font or static image. But If I want to use a gif for a BTT button, I can still do that from the StreamDeck interface. (I have some Stream Deck plug ins that I can't replace with BTT yet, so thanks for giving maximum options!)

Also, on another note, you might want to consider listing the plug-in on the regular Stream Deck Store. I know you don't need to for functionality, but it could be free direct marketing to the exact people who don't know about BTT, but who are wanting to configure the Stream Deck they just bought.

I'll definitely list it in the Stream Deck Store once everything is a bit more tested!

The hybrid approach is nice, but on the other hand the way plugins work with the original Stream Deck software is not very efficient (and there is no way to improve this). Thus I aim to provide all functionality in BTT itself for best performance. The good thing is, the architecture I use allows me to maintain both options easily without much overhead.

I don't think the Item Identifier or Fixed Identifier options are working, as intended, or maybe I'm not seeing it.

I can't point any buttons to the second item on my Trigger List. It only connects to the first trigger. 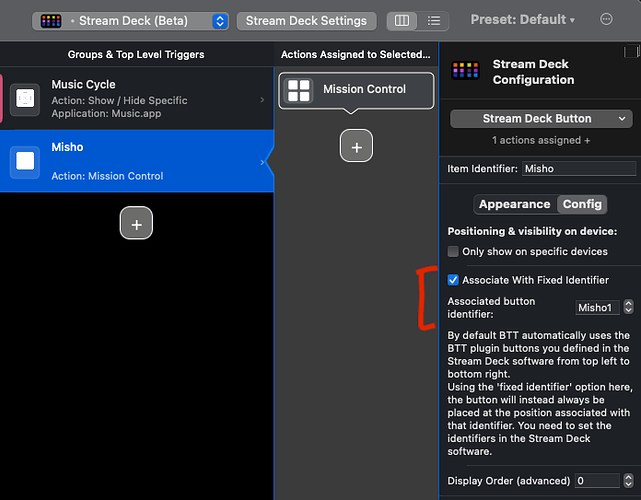 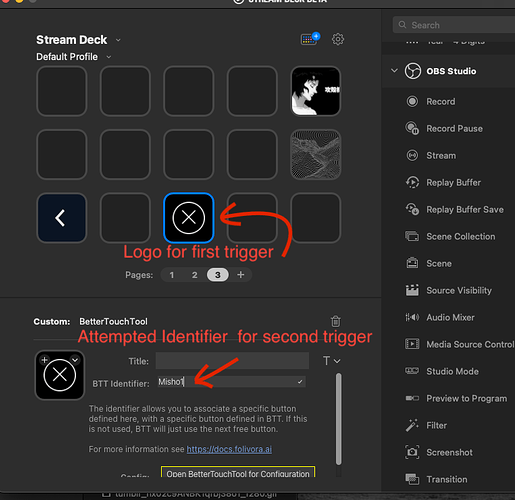 In the Stream Deck app, if I start typing anything in the BTT Identifier: field, the checkmark appears, as if it's found the identifier. But if I have one button on the App page, it's always the first trigger., not the one with the identifier. I've tried numbers, words, copy and paste. What am I doing wrong?

Having everything on a dependent chain leads to some really strange behavior.

In this example, I only have two SD buttons configured in BTT, in All Apps. Let's call them Show Music and Mission Control.

If I use my first button (Show Music) on page one of my default SD profile, it works. The button is great.

But if I try to add the second button (Mission Control) to the next page of my default SD profile, it will not recognize it as the second button. Instead, it gives the Show Music function, again. This happens no matter what is going on with "Fixed Identifier". If I add a second button to page two, then I get my Mission Control. But that means I can only ever have any used BTT buttons on the same page, and only once.

It's worse with more buttons: When I try with six buttons, ABCDEF, then the fixed identifier means I can sometimes set E in a different place, like AEBCDF. But I can't get E to show at all unless there are five other buttons on the same page.

When a user makes a button, it would be better if they can set it in the SD like a named trigger. Right now, it is dependent on whether all other buttons in the chain are also currently present on the specific page.

Shorter:
If I call a button Fred in BTT, and then I tell SD to "Watch out for a button specifically named Fred" then I expect it to be a nice stable button that does Fred actions.

It's not doing that right now.

Ah I think I found the issue. Will be fixed in next alpha. 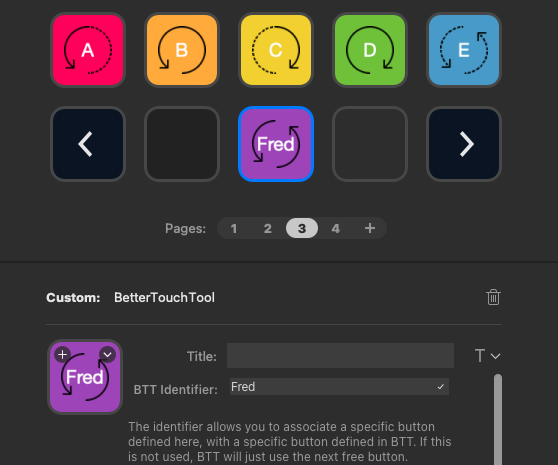 Some things are working much better. In this example, all of the buttons have Fixed Identifiers. I can put Fred on Page 4, I can have a single button with Fred and no other buttons. This is a big improvement.

There are two things I noticed that can still make it act weird and unpredictable.

If I use all fixed identifiers, every time, then I think it is workable. But other users might be confused. It might also help if the Add a navigation arrow is something that could be opted out of....

I hope this feedback is helpful.

Quick question and I may have missed it:

Can you specify a button to be on a specific page? Or do I just use groups to create pseudo pages?

This is really cool!!

@buckbuck I’ll look into these, the option to disable paging will definitely be added.

@gwthompson are you using the „bettertouchtool full control“ or the plugin mode?
If BTT has full control you’d just add more buttons and BTT will automatically split them into pages if they don’t fit into one. If you use fixed colums/rows the first button with that col/row combination will be on page 1, the next on page 2…

I'm using the full control mode so I will try the fixed column/row.

Thanks for the quick response!

So I created 2 buttons with the same fixed column/row and it worked by putting the second one on page 2. However it created a navigation button in the lower right on page 1 which makes sense but it hid the button I had in that corner originally. And now the missing button doesn't show on either page so I'm guessing the calculation for the number of buttons on the first page still thinks it is showing. My thinking was the missing button would get pushed to page 2 but it didn't.

A lot of moving parts for you to wrestle with but man this is still the coolest thing!

3.808 should again fix some layout issues.

Plugin mode:
Buttons with fixed identifiers should now only show up if a corresponding plugin with that ID is configured in the Stream Deck software.

Full Control mode:
Paging with multiple buttons that have the same row / col should now also behave better. @gwthompson I'm not sure whether I was able to reproduce your issue, if it still happens - could you send me an export of your preset? (Or go to Help => Export Diagnostic Debug Info, send to andreas@folivora.ai)

3.808 should again fix some layout issues.

This is fantastic. I just stumbled on this thread because I'm an avid user of BTT and I just purchased a Stream Deck the other day... and I immediately went to search for how I could invoke BTT triggers via the device. Sounds like an amazing update!

Thanks for all of the hard work on an application I use all day, every day.

Fantastic news, thanks! (And yikes, hope you feel better.)