Describe the bug
The Up and Down triggers for the white Apple remote send their assigned action/shortcut twice. For example, I have these triggers assigned to volume up and down in a variety of apps (iTunes, VLC). When I trigger them, I see the volume go up (or down) by two notches instead of one. I've experimented with tying these triggers to different actions in different apps, and consistently the action, whatever it is, will be triggered twice.

It seems to work fine with my silver Apple Remote, but also here I'm using an external IR adapter because I don't own a Mac with an internal IR receiver anymore.

Does it always happen or randomly?

This particular problem happens all the time.

(There is another problem, which I didin't mention, that happens intermittenlty, and resolves intermittently. This problem is that the white Apple remote just stops working for a while, and then starts working again. Restarting BTT doesn't reliably fix the issue. It seems random, and as such I'm not sure how to file a good bug report for it.)

I understand that support for this very old remote is legacy, but as I use it all the time I just had to ask whether a fix might be possible. Thans at least for looking into it!

Update on the Up/Down double-trigger issue:

I downgraded first to btt2.345, then to btt2.320, since I was pretty sure that the issue arose after Feb 2018, and definitely after Dec 2017. But the issue persisted after both downgrades. Then I downgraded all the way to btt2.0, and the issue was gone! (Ie, the Up/Down white Apple remote triggers only send their assigned action once, not twice.)

I then tried to upgrade to some version between btt2.0 and btt2.320, but ran into issues with my data file being out of date or something? So I gave up on trying to find the exact version where the problem arose.

Since btt2.0 is working for my purposes, I'll continue to use that for now.

Hoping that this report helps you localize the problem, in case you have any time to dedicate to this niche bug. Let me know if I can do anything more to help.

The above mentioned issue still exists. I could reproduce it.
Could there be an option to make Better Touch Tool just ignore the Apple Remote inputs? When I exit the app, my Apple Remote works just fine. Of course without any special actions then.

Is there anything I can contribute as a simple end user? I can reproduce the issue 100% of the time. Any test or log file I could provide you with?
Thank you so much for your support.
Ben 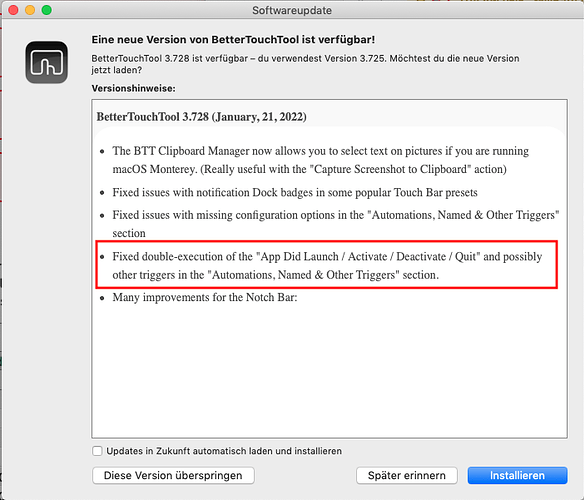 Any chance to do the same fix for IR inputs?

Sorry, that's a very different topic and not related to this fix at all. I don't plan to touch the old Apple remotes stuff anymore. It's not available in the current UI and I do not have access to such a remote nor to a machine that has an IR receiver. I would recommend the Remote Buddy App for this: Download Remote Buddy (iospirit.com)

I finally could solve the "double trigger issue" regarding my Apple Aluminium Remote.
Like I initially suspected, the individual triggers were configured twice for the device Apple Remote, maybe because of a sync issue. Removing the duplicate trigger entries, solved the issue for me completely. The configured Apple Remote triggers are working again just fine.

I'm not exactly sure why, but for some reason I could not find the right menu for that configuration. I guess, I was not aware, that the old UI is still available or maybe the Apple Remote (legacy support) device was not available in earlier versions.

I'm quite happy, that I finally could solve the issue.
Thanks for your great work. I really can't imagine working on any of my Macs without BetterTouchTool.