I'm not entirely sure if this is a bug or just me not understanding scripting... But here goes:

I'm trying to update a widget's icon via AppleScript. If I use...

... the widget completely disappears from the Touch Bar, making nearby icons kind of crash into one another. Disabling and re-enabling the widget then restores the proper configuration, with the icon properly updated (!!).

... it works more or less as expected, but the icon flickers each time it is updated, as do the ones next to it. I presume refresh_widget just does quickly what a manual disable/re-enable does slowly.

Am I doing something wrong? I thought update_touch_bar_widget was supposed to suffice to update an icon.

shouldn't be path be absolute? Like /Users/yourname/ instead of ~ - though I might be wrong, you'd have to look it up from docs

Also, the path is definitely recognized – as is the UUID – since the icon is updated to whatever path I specify. It's just that I don't see it at first because the icon disappears – I must bring it back by means of refresh_widget or a manual disable/enable to see it.

Also waiting for a reply here. Still same behavior with 2.645 and macOS 10.13.6. The widget/icon disappears from the Touch Bar if only update_touch_bar_widget is used, and it flickers if used conjunction with refresh_widget.

Having a problem here updating anything on a widget:

neither of these are updating my widget. I've tried webserver and AppleScript

Has anyone had any success?

update_touch_bar_widget only works with the Apple Script or Shell Script widget. Are you using any of them? Otherwise you'd need to use the update_trigger function

Andreas, could you please also have a look at my original issue? Just see the first post in this thread. I can't for the love of it figure out what I'm doing wrong. My scripting target is definitely a widget, but the disappearing/flickering issue means I have to update the icon as little as possible, otherwise I get constant movement in my Touch Bar. That can't be how it's supposed to work!

Try to provide a title as well as the icon, but in the settings make it "icon only".

Jolly, that worked! Thank you.

I already had the widget on "icon only", though. (And it already had a title/text.) So this still seems like a bug to me. But of course it's workable now.

Then it should work fine. Is the UUID correct? Is external scripting allowed? 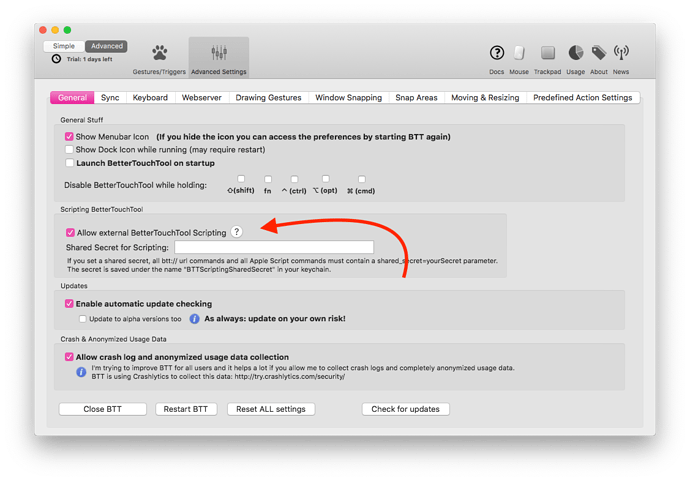 double triple checked the UUID, yes external scripting is allowed. I have a secret set, it prompts me for it when I run the script.

if possible please go to the about tab in BetterTouchTool and click the "export debug information" button. This will create a folder called BetterTouchToolDebug on your desktop, if you send that to me I may be able to see what's wrong (andreas@folivora.ai)

You just have normal buttons set up and assigned scripts that are triggered when they are pressed.

Widgets are added using the + Widget/Gesture button in BTT. The point of script widgets is that they run a script to determine what they display.

If you want to update a normal button/trigger (which usually just shows static text) you can use the update_trigger function like this:

That did it. Many thanks.