I don't know if these things are related, but Fusion360 isn't recognizing the third mouse button. So I thought I'd look for an update. However when I go to update I get this message:

BetterTouchTool can’t be updated when it’s running from a read-only volume like a disk image or an optical drive. Move BetterTouchTool to Applications folder using Finder, relaunch it from there, and try again.

It's definitely in the applications folder and not on a CD or VD.

Pretty sure Fusion was recognizing the middle button the other day. But Fusion did just have an update so it could be on that end also.. Not sure where to go from here. 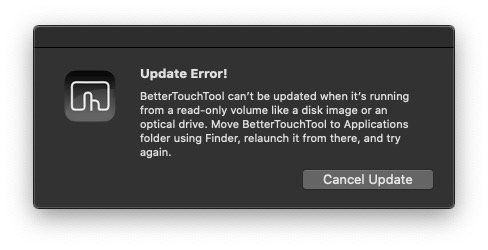 Update - BTT does work in Fusion360 as expected at work on my NNMP, but forgot to get details, though I'm pretty sure everything is pretty much up-to-date.

Update 2 - I clicked "Reset all settings" and almost instantly got a popup asking to move BTT to the Applications folder. So I did and it moved from wherever it thought it was I guess. BTT is now updated, but didn't fix fusion not recognizing middle click.