Hi, is it possible to add a True Tone toggle in BTT system actions?

Wanting this feature as well, would be very useful when using apps like photoshop etc..

yes, I think I have figured out how to do it and will add it to the next version of BTT.

This pre-alpha now has a true tone toggle:
https://bettertouchtool.net/releases/btt2.541.zip

Will be available in a public build in a few days.

Thanks for adding it @Andreas_Hegenberg

It doesn't seem to be working, monitoring the mac's True Tone checkbox in 'Displays' in System Pref. while toggling the BTT True Tone button doesn't do anything. I've check my permissions, everything seems to be ok. Any ideas to try?

Also,
Is it possible to add a separate On and Off for TrueTone?

Ohh ok, but still, I don't notice any change in warmth. When I uncheck the OSX box, there is a very noticeable change (in my current light).

Anyone else able to test?

Ahh sorry, I accidentally only activated it for Mojave

No worries, thanks for checking it out, and adding it so fast.

the latest alpha should also do it on High Sierra

I'll add a on off option to the public release soon.

I am excited about this feature, but my alternative icon doesnt seem to work... It only shows one type of icon in the touch bar, no matter what I have it se to.. it would really be useful to know if the true tone is on or off, as I do alot of Photoshop work and would like to know if the feature is turned on or off. Also, is it possible to disable it for individual programs?

Thanks, keep up the good work.

yeah would be great if the alternative icon switches when toggled on/off!

Hi, I posted a workaround in another thread (no one seemed to care in that thread)

I requires some understanding on how to set it up on your part, let me know if you get stuck somewhere. Basically the idea is to write 1 or 0 to a text file that is updated each time you hit the button, it then reads the text file and responds. My TT toggle displays if it is on or off now.

"
I've come up with some sort of a workaround for visually displaying the true tone status after changing it in the background with native BTT toggle, which doesn't require opening any windows.

As you can see it's a big work around since the value is not connected to the actual true tone value at all; its just a toggle between 1 and 0. So the value could get out of synch and the user would have to manually toggle true tone themselves to get back in synch (not an issue if you only use BTT to toggle true tone).

I got everything I needed from this stackexchange example on how to do a toggle:

I'm using a widget to run apple script and show return value, with the frequency at 0, so just using the additional action to update the state of the widget on press.

And I can still use a long press action on the button too; since it seems like BTT doesn't run the additional action attached to a widget on a long press

hopefully these will help: 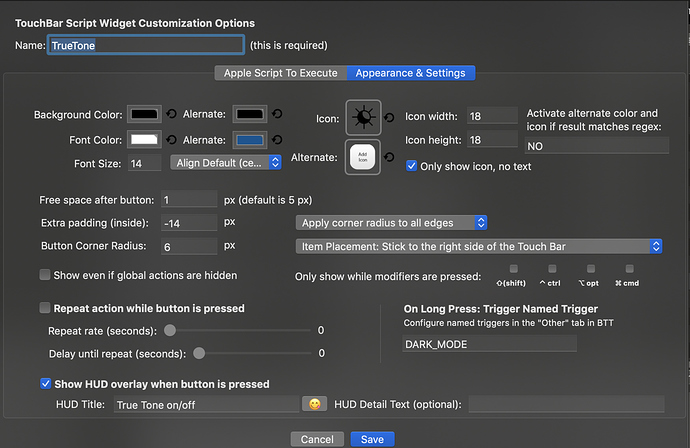 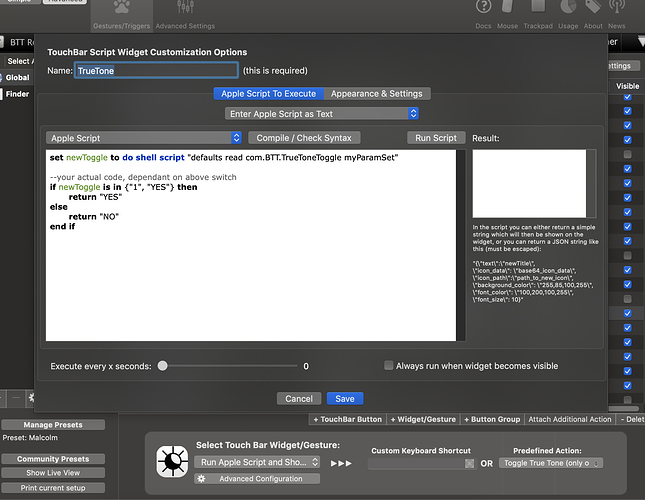 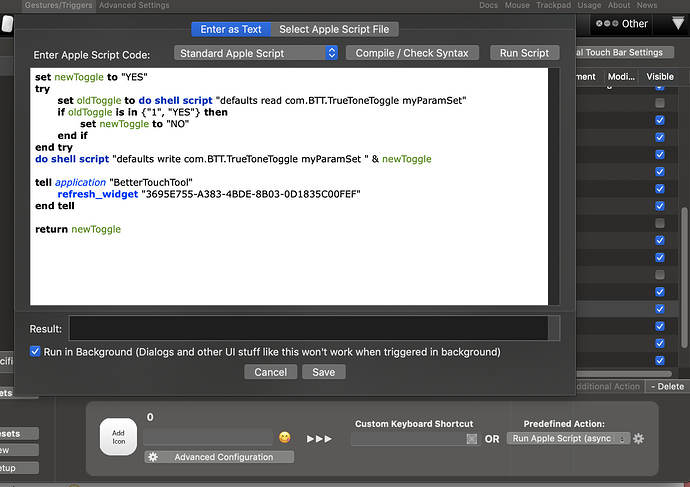