TL;DR: My license ended. I tried upgrading to an ineligible version, downgraded back to the most recent version available to me (all through BetterTouchTool internal prompts), and somewhere in this process my previous entire setup was written over. Now I have a clean slate, with no configured actions whatsoever. Would love a way to bring back my old setup.

Long version: My two-year license just ended. I got a pop-up telling me my options: I chose "see release notes before deciding." I read the release notes. I was currently at 3.502, and the newest release (for which I was ineligible) was 3.540, with some updates I'd missed in between. Hoping maybe I could get the ones I'd missed, if not 3.540, I hit "Download" and relaunched. A new prompt told me that it was a version not covered by my license (true) and that I could downgrade to the last available version, 3.4**. (I think here already my Touch Bar was telling me I had no configured actions.) I hit Downgrade, relaunched, and still got "no configured actions." Tried restarting the app and restarting the computer, still nothing.

I found some data in ~/Library/Application Support/BetterTouchTool that date back from my previous version (ex: btt_data_store.version_3_502_build_1639), but have no idea what to do with them to bring my settings back. Most of my configurations were related to the Touch Bar, not much else. 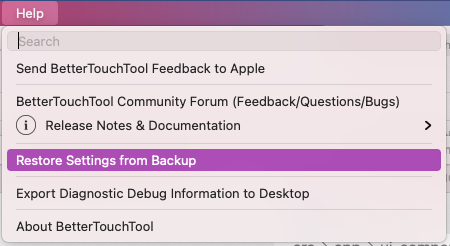 But if possible first make a backup of this folder: ~/Library/Application Support/BetterTouchTool (go there via Finder => Go => Go to Folder and make sure to include the ~)

Thank you! I'd been using the old UI still, which didn't show me a Help menu for some reason, but switched to the new UI, found the Help menu, and there was a serviceable backup.

Chose not to continue the license this time because I'll be switching to a non-Touch Bar model soon, but will come back if I ever need! Thanks for all the hard work.