1-finger TipTap (both left and right) is very unreliable, whether it be in an app or in Finder. I'd say that on up to 25% of my attempts to tip-tap, it "goes silent" (failing to register any tip-taps no matter how many you try) indefinitely until you fully lift your fingers off the Magic Mouse to refresh the gesture state. This can be seen to be a BetterTouchTool-domain issue as the HUD fails to come up upon these failing taps, and how additionally the poor responsiveness reproduces in Live View.

This flakiness remains the case even after adjusting the advanced settings to be as sensitive as possible in all respects.

Note: I have also tried using 1-finger TipTap as the sole gesture. 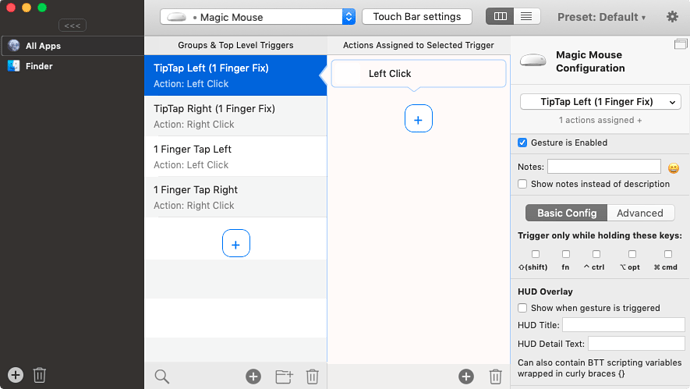 Note: I have also used the default settings. 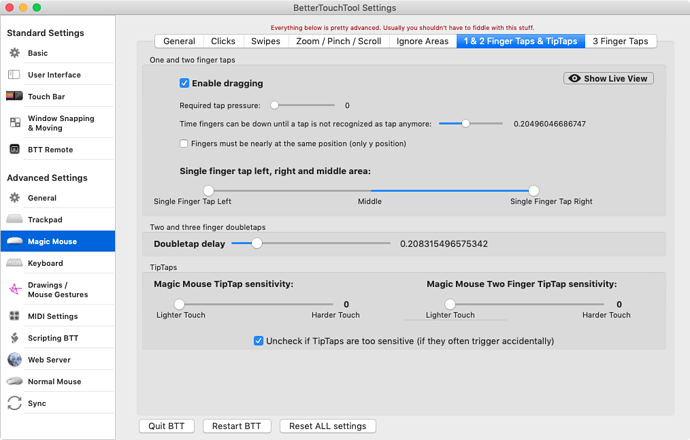 Hard to demonstrate short of taking a video, but hoping somewhat that this is recognised as a known problem with a known solution. I had expected the experience to be as seamless as using tap gestures on the laptop trackpad, but in practice it has been far too flaky to feel confident in using.

Thank you for any help! I really like the premise of BTT and would love to be able to reliably perform clicks on my Magic Mouse, just like the touchpad, without the required pressure of a full click.

Tip taps require you to lift your fingers, this is intended. Without this they'd constantly trigger while scrolling (as I can't integrate as deeply into the system as e.g. the Apple trackpad drivers). Thus they are always listening for the tap of the first finger and then the tap of the second finger, only if both have been recognized they will trigger.

However just having left and right single finger taps and assigning leftclick and right click to them will allow for „tap to click“.

I see. Thank you for the very quick response!

However, it still seems that I need to remove my fingers from the Magic Mouse for the taps to register.

I've shared you a video over iCloud, to andreas@folivora.ai, of what trackpad behaviour I'm trying to achieve. I'll take another video in a moment to show what behaviour I'm getting in practice on the Magic Mouse.

I've now added a video (into the iCloud album share) of the in-practice behaviour of left single-finger tap with BTT on Magic Mouse 2.

So whether by TipTaps or by single-finger taps, I'm unable to reproduce the trackpad behaviour of "listen for taps with a free finger whilst other fingers are resting".

Is this a fundamental limitation that BTT can't surmount due to Apple's insufficient driver API exposure? Or could it be achieved, for example, by sacrificing other functionality?

Ah I see. Unfortunately I think this is currently not possible, BTT only supports these tap actions if only one finger is touching the mouse at the moment of the tap.

The problem is that BTT works a level above the Apple driver, which makes this stuff hard. (not impossible probably, but I don’t think I’ll be able to support it in the near term)

Unfortunately I think this is currently not possible, BTT only supports these tap actions if only one finger is touching the mouse at the moment of the tap.

The problem is that BTT works a level above the Apple driver, which makes this stuff hard.

Understood – I've hit brick walls dealing with iOS APIs before, so I'll understand if they simply don't expose enough for you to implement it cleanly.

The problem is that BTT works a level above the Apple driver, which makes this stuff hard. (not impossible probably, but I don’t think I’ll be able to support it in the near term)

It's a pity, as it's a pretty common pattern – while resting one's fingers on the MacBook Pro trackpad, one can double-tap text to highlight it, for another example. They're evidently handling finger-resting in various use-cases, so I'm surprised that they don't make the functionality public.

Please don't hesitate to contact me if you make a breakthrough on this front at some point! This would be a dream setup for me to relieve pressure from my fingers.

Will do. I had some good progress with something similar on the Magic Trackpad recently and I might be able to port this over to the Magic Mouse - but I don’t want to get your hopes up too high yet

All that API is undocumented, which doesn’t make it easier.

Thank you! Happy to test out any alphas for a Magic Mouse improvement in this respect if it does come to it.