Would be great if you could add a "reverse direction" checkbox to the App Switcher. So that one could use tip-tap gestures where left goes one app to the left in the app switcher.
Or is there already a way to do this? The only way I could think of is by doing it with shortcuts and a named-trigger on gesture-release (in order to hold cmd => so the app switcher is active as long as you touch the touchpad)

⌘⇧⇥
You mean that? Also swiping with two fingers on your trackpad when the app switcher is activated lets you "fly" through the stripe in macOS.

as @Caliguvara said scolling works fine in the app switcher.
If you want to bind this to a tip tap gesture you can use the scroll action which I just added to 3.085 and configure it like this (this will go one item left) 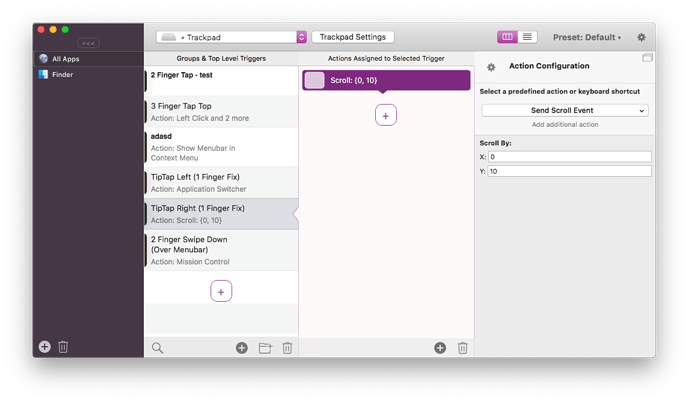 3.085 is currently uploading and will be available in 10 minutes via "check for alpha version updates"

Thanks for the fast response. The 2 Finger scroll is interesting. But it did not quite behave the way I wanted it (after scrolling you have to press enter to switch the app).

I now figured something out that gives me the result that I was looking for.
On tip-tap command-key is held and tab (with shift for left one) is pressed (using applescript as normal keystroke makes Down&Up). As soon as you release the gesture (remove all fingers from touchpad), it releases the command-key and switches to the selected application. 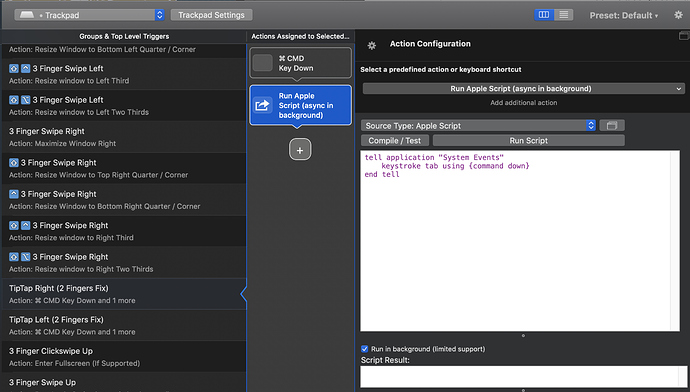 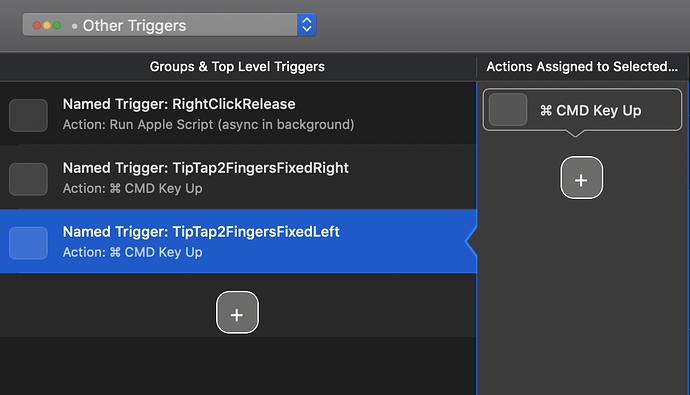 i failed to reproduce this effect using the screenshots, the command button kept pressed down permanently, I am trying to invoke the App switcher using the three finger TipTap with 2 fingers fixed, don't care about the direction but same as you don't want to mouse press the icon.
the application switcher in the Actions is nice with the two finger scroll and all but if we are using mouse anyway to pick the app i guess its spark decreases somewhat, also in the updated GUI i couldn't find option to pick special application switcher, Am I missing it?

I've got here a bit a more complete guide how to reproduce what I have now. I actually set it up on 3 finger clicks now but generally works the same. 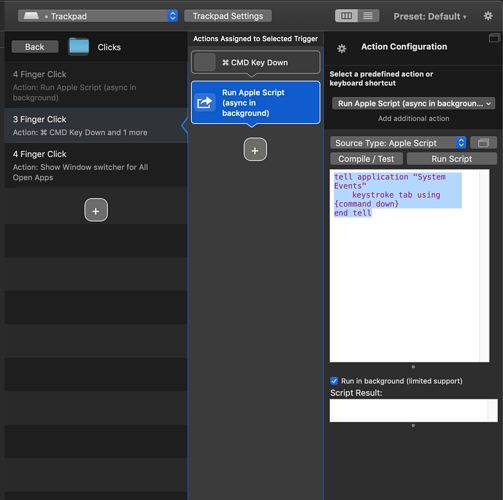 Then trigger an named trigger 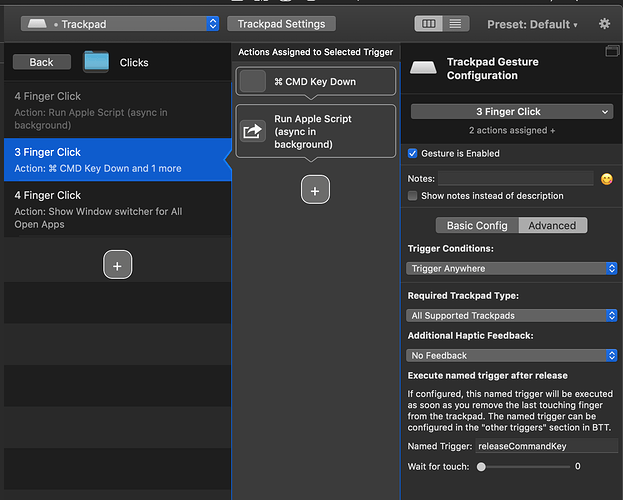 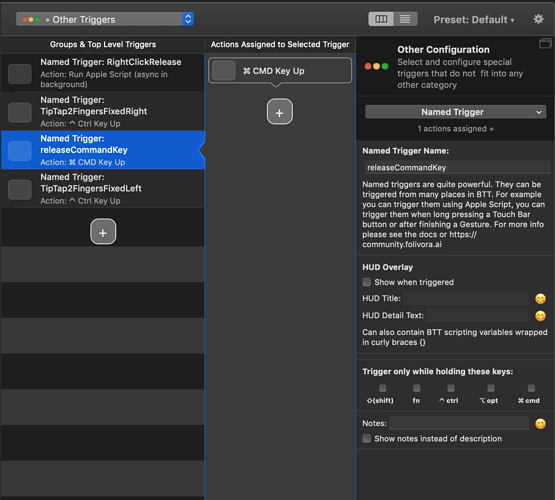 This allows selecting the app with with 3-finger-clicking multiple times (with shift to go back)and just lift all fingers or lift one finger and scroll, lift 2 fingers and click.

When something is set up wrong, or rarely if something went wrong with the action the cmd key may be stuck down. In that case just restart BTT and it's fine again. 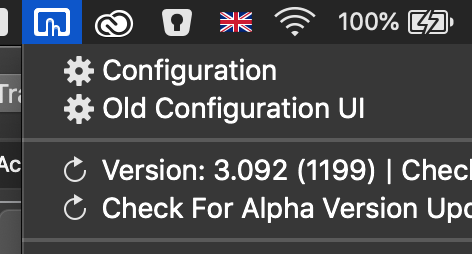 You can still go back to the old UI. Sometimes helpful if you can't find something anymore, though I think actions and triggers are the same in both versions.

I had this working before upgrading to BTT 3.333, did you upgrade and were you able to get it working if so?

Just updated and I now have an issue with this as well.
For me the applescript still works – I can trigger the macro once, but if I trigger it again (without lifting all fingers) I see a menu popup which allows me to choose from 2 macros with the same name.

This is essentially the same issue I had, I went ahead and exported & downgraded and it works again. I'm curious to know if someone can get this working in the latest version.

Could somebody post or send (andreas@folivora.ai) a non-working preset ? This seems to be something pretty specific.

Just sent my presets to your email.

It would be great if you could check whether this works again with 3.334 (will be available via "check for alpha updates in 5 minutes).

The problem seems to come from a corrupted preset - it for some reason contains a few named triggers without name, which are not shown in the UI though. A change in the new version caused these to come up in certain situations.
I will check what could have caused this corruption, but it should not cause problems anymore (I hope).

Oh and I think there is one more little issue. You have a conditional activation group "Not Vivaldi", which defines the same named triggers again. However they are already defined in the global name space. Not sure if this will cause problems, but BTT should trigger the application specific / cag ones with higher priority than the global ones.

I'm not completely sure how to use your preset though

I always end up with a stuck ctrl key, how do you use this app switcher?

Thanks a lot for looking into it and fixing this.
I can confirm with 3.334 it is all working again.

For the second issue: Oh yes, sorry – I should have removed that before sharing. It was a bit a work in progress. I set this up, as without this the app switcher would not stay visible between multiple triggerings. (Wanted to achieve the same as holding CMD and clicking TAB multiple times). It did work, but once in a while the key got stuck – I think because I had something configured wrong.

Hi Andreas,
I just upgraded to a lifetime license to get BTT 3 with the beautiful new UI

I am trying to get the App Switcher with a "2 finger tiptap left". I have two problems with the scroll solution you suggest here. I have to trigger the app switcher first by using "2 finger tiptap right" and then I have to switch fingers so I can perform the scroll event with "2 finger tiptap left". Also when I reach the left most app in the switcher it won't jump to the right most app next (as I would expect)...
It would be super handy if there were an action that performs the "backwards app switching" like you would do with "hold ⌘⇧ and hit ⇥".

You just use the wrong fingers. Have 2 middles fixed so index and little finger are free to tab.

And I think you misunderstood what he meant with scroll. Once you opened the app switcher you can scroll with 2 fingers – which is really fast so would not matter that you cant jump from first to last.

I now get it setup that on 4 finger click app switcher comes up and after lifting the outer 2 fingers I can scroll left and right on the app I want and lift remaining fingers.

@Julian_Steinmann thanks for your reply and I totally get what you mean and also get it working like you describe. But that's not what I want and what suits my behaviour. I don't want to scroll to switch apps. I want to tiptap. thats more accurate and reliable for me.