Note: Before bug reporting, please make sure you have tried the latest (alpha) version of BetterTouchTool and that you have already tried to restart your system :-). If you encounter a crash, please attach a crash log from the macOS Console.app from the "User Diagnostic Reports" section.

Describe the bug
Cursor hover does not work in multiple apps.
Unable to drag windows when activating Mission control (hover does not work either). It seems after the first Mission Control activation hover stops functioning. Hover continues to work for the Magicmouse but still unable to drag the window.
Exiting BTT solves the issue.

I'm having a similar mouse issue when using SteerMouse + BTT. I actually don't need any of BTT's mouse functions, so would be great if I could just disable them entirely somehow.

unfortunately the conflict is not with BTT's mouse functionality (which is disabled if you don't use it).

It's probably with macOS event taps which can be problematic if multiple apps are using them. Unfortunately there is probably no way to resolve this ;-(

@Andreas_Hegenberg is there no hope of these two apps working together?

Unfortunately BetterTouchTool will not allow me to hold shift and scroll down to trigger the keyboard shortcut "shift+alt+left arrow" or simple things like this, so I've stayed on SteerMouse. Or if it's possible to someone resolve the conflict between the two apps

I was able to fix a conflict between BTT and Steermouse by using BTT's "Disable BetterTouchTool while holding" option in BTT > Settings > General.

Here's another alternative. I just started using SteerMouse beacuse Logitech G Hub is absolute garbage software. I was using BTT and had mouse events specified for both FinalCut and Sketch for key-scroll events to zoom the timeline or in/out in Sketch.

Instead of disabling a whole key I just disabled BTT for that app. 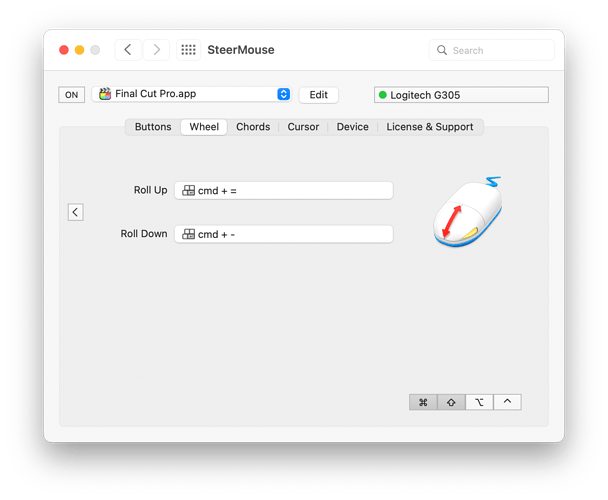 Formerly, I had the same sequence in BTT, but BTT was blocking all horizontal scrolling. So, had to delete all mouse captures in BTT and disable for specific apps. 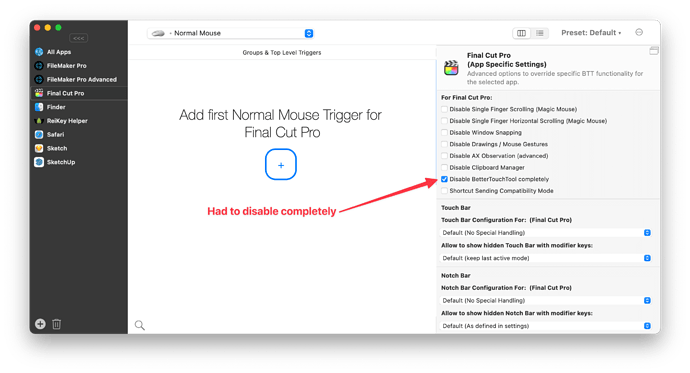 Further testing update. There is something, in my case, certainly tied to the Shift key. BTT will allow SteerMouse captures to happen when I use modifiers other than the Shift key while BTT is running.

I was using Shift as my horizontal scrolling modifier. BTT, when running, would prevent SteerMouse from scrolling horizontal.

I then tried Command. This was passed through, even when BTT is running.

I also switched my modifier combinations from Shift-Command for zoom in/out (Cmd = and Cmd -) to Ctrl-Cmd and with BTT running SteerMouse was able to send the keys.

Something is up with the Shift key and BTT. But a feature of being able to ignore regular mice would certainly be welcomed. I use a number of Drawings in BTT and can't really live without both apps now.

THANK YOU - this was driving me nuts. TL;DR: with SteerMouse + BTT, horizontal scrolling does not work with the SHIFT modifier, but DOES work with the COMMAND modifier.