Simulate a keyboard press while holding down a mouse button

I would like to be able to hold down the Button 3 or 4 on my mouse and have it act as if I'm pressing command on the keyboard.

The situation would be that I could just press and hold button 3 and hit the Q button on my keyboard and the app I'm in would quit (Command + Q).

Is this possible with BTT?

Try KeyboardMaestro, i think it can be done. 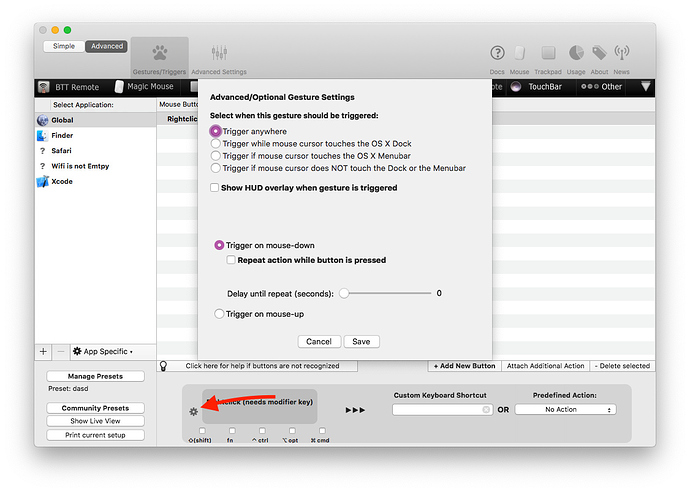 I ended up using SteerMouse to do it. Doesn't work perfectly but it does simulate the command key the entire time I'm holding it down and then stops as soon as I release.

Have you tried the option I described above? I'm using that with an external mouse since at least a year and it is working perfectly here.
Of course if you prefer SteerMouse that's totally fine.

I didn't try your option because I don't have enough buttons on my mouse to make it work. All my other buttons have different functions assigned to them. It's very important to me that it work with a single button (and a single click + hold).

Thanks and let me know if you think I'm missing something.

Thanks for sticking with me. That works great. I just uninstalled SteerMouse.

Thanks for making such a great product. 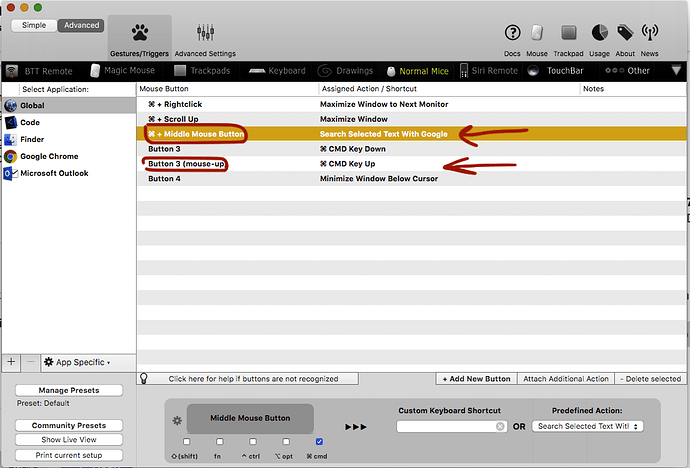 When the Google search is triggered, the Button 3 (mouse-up) event is not fired and my computer thinks I'm holding down the command key until I repress Button 3.

Uh sorry, that's a use case I haven't tried before. Probably it gets confused due to the various modifier / mouse states.

I think you could make it work by adding an additional cmd+middle mouse button that triggers on up, then send a cmd key up there. (And make the "search selected text with google" trigger on middle mouse down)

That fixed it. Incredible.