See the Screenshot below.
Basically Widgets and buttons that should appear only when a modifier key is pressed do not appear, Widgets that should disappear once you push this button aren't shown at all.
This happens only inside a button group, if the widgets or buttons are copied directly to the "Global" List they appear and disappear as they should. 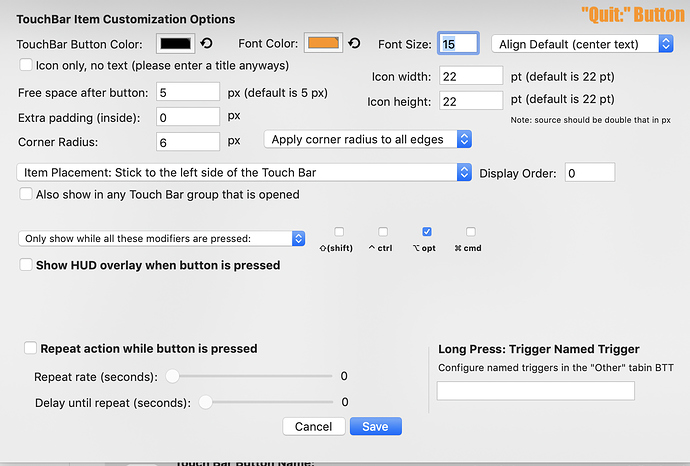 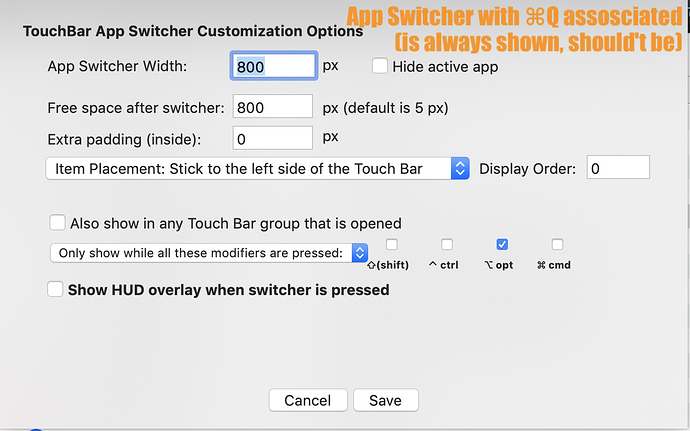 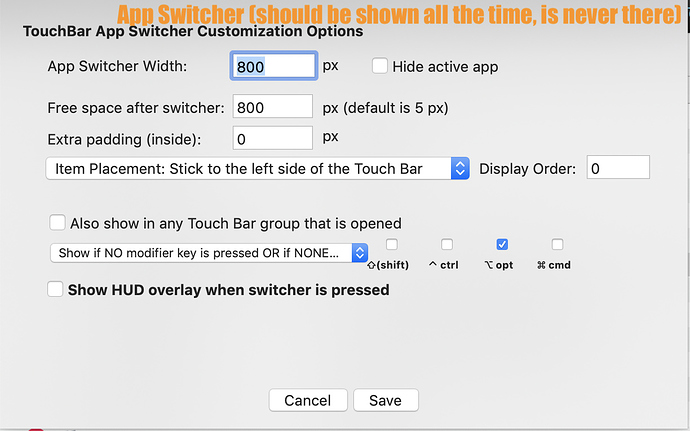 Any ideas?
Thanks, have a great evening

Seems to work fine here, are you sure it's not the other one showing? (Try to set a different size for both, then you should see them switching when option is pressed)

Ok, this brings up the "normal" Application switcher (the one that's not associated with ⌘Q).
Still both of them do not respond to any modifier key (⌥ here, I also tried to change them without success).
The bar looks like this now, but the idea would be that once I hold ⌥, the normal app Switcher disappears in order to bring up the one that quits the apps [edit: and the Textbutton "Quit:", that should not have been there without any modifier key].

I think the problem may be that the system thinks you are executing cmd+opt+q in that case.
You can try whether the correct widget is executed by assigning an action like "Show HUD" or expose.

Try instead of cmd+q to assign the "Run Apple Script" predefined action and run a script like this one:

None of them working (HUD or the apple script as attached), in both cases the modifier keys settings are ignored regarding less the key (tried also with ⇧, failed too).

If I just copy the original content of the Touch Bar Button Group out of the group directly into the Global Section, they appear and disappear perfectly.

Sorry, I didn't realize you where using it in a group.
Could you try whether 2.697 (just uploaded) fixes this for you?

Winner of a virtual beer!

Honestly, thank you. This really drove me nuts

And compliments for the great job you do, the program itself is already awesome, but your support is exemplary