I tried to set up a shortcut that would switch to a specific application (BBEdit, to be precise, but I'd like to do this with other applications as well), then show the new application's menu bar as a context menu. But the menu that pops up is always that of the original active application when I trigger the shortcut, not the new one, even if I insert a delay to give the new app time to load. I've tried both the launch and the show actions to switch applications, but it doesn't make a difference. Is it possible to do what I want?

OK, I figured out an answer to my own question: AppleScript to the rescue! In case anyone else wants to try it, this works for me (you'll have to set up your own "show menubar" action in BTT first and use its UUID):

Just chaining a few actions and adding some delay should also work: 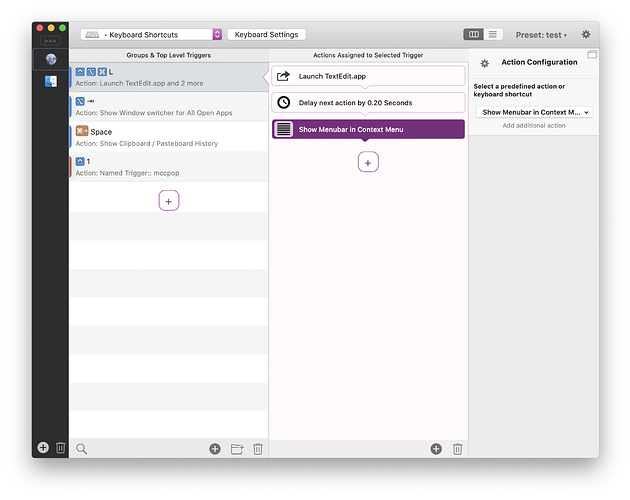 However the Setapp version might currently have a bug related to delay - I'll release the next update to Setapp soon.

I don't know if you ever got around to addressing the delay bug in the Setapp version, but I just tried this again and it's still not working — I get the menubar either from the application I started in or from the BTT app.