Describe the bug
Full disclosure, I could also just be misunderstanding how to use it, but:
Assigning "Show Custom Menu" to any trigger doesn't seem to do anything. Changing the "menu template" option from Radial to Linear just instantly changes it back, so I suspect it might just be borked?

The UI for editing the menu shows the "Notch Bar Configuration" and wants a trigger from an empty list, so my theory is that I am either using this wildly wrong OR it might be overlapping with some of the beta code for the notch/menu bar. 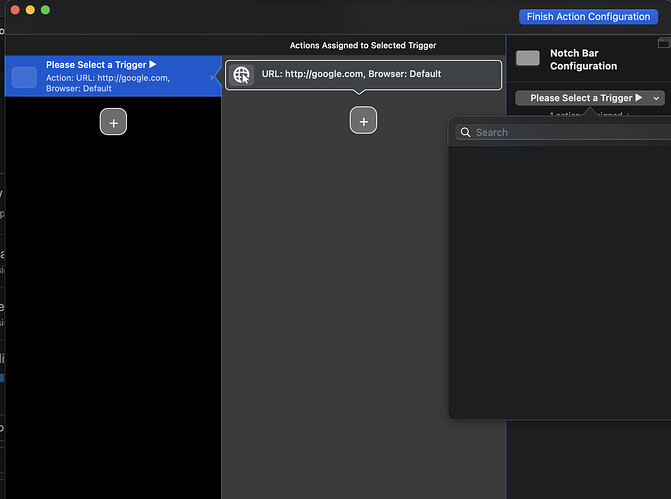 Does anyone have a working example of this?

Oh sorry, not sure how that made it into the release version.
The custom menu stuff is not yet ready, it will be one of the next big features.

If you want to show a custom context menu use the "Show Custom Context Menu (New)" action.

Thanks for the quick response.

Looking forward to using it, if it's what I imagine based on the stuff that was there.

About the Custom Context Menu (new), I assume it's expected behaviour that it hides the custom notch/menu bar when open/just a limitation of how BTT does it? A small percentage of the time, though, it doesn't actually return after I close the menu. If I open/close the context menu again, the notch bar also returns. Is this a known bug? If not let me know if there are any logs/such I could dump if you want to check it out. Not a big deal, but gets a bit distracting

Ah that was indeed a bug, thanks for reporting! Just fixed it and will include it in the next alpha build later today.