I've got many BTT actions that run embedded scripts, but in order to make a whole class of them more efficient, I have written a standalone script that takes a few parameters. I have that working, but now I'm having trouble translating that to a BTT action.

In Terminal, from my home directory, I can type ./xyz.sh parm1 parm2 parm3 and things happen as I want. I've tried several ways of writing it into Execute Shell Script / Task but the script always fails saying the parameters aren't what it expects.

can you post your configuration for the execute shell script / task?

By default the standard environment variables are not available within the "Execute Shell Script / Task", which means you always need to use the full path to any executable you use inside of your script.
If you want you can provide your path environment variable to solve this (you can get it by typing "echo $PATH"): 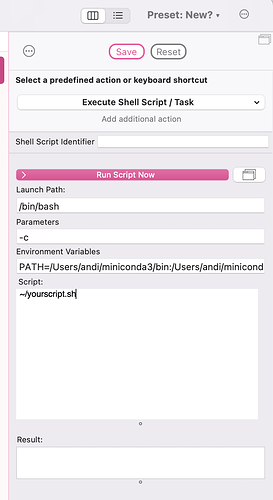 The script is only using built-ins as it just constructs a URL and opens it. I thought the problem was that the parameters were being shifted somehow as it was complaining part of the URL was wrong and I had tested it.

Except... I had not tested this exact case which I just discovered also fails in Terminal.

Thanks, however, as the PATH tip is useful. I had always qualified executables, making for unwieldy scripts at times.

Having fixed my script, it now works as expected via BTT.