I love BetterSnapTool overall! There's one problem. Most of the time I'm moving windows, I do not need to snap. In most instances, it's a minor annoyance to see my custom snap areas display on the screen every time I grab a window, but once in awhile, it's a legitimate PITA when I accidentally drop a window inside a snap area.

Then again, I've just started using the tool, so maybe there's already a way to do this! Thanks for reading!

for custom snap areas you can define modifier keys that need to be pressed for when they should show. However it needs to be configured for every snap area.

Good to know, but I won’t use it to be honest. Too much to remember. The more I’m using the tool, the more I’m convinced that showing snap areas should not be the default behavior when grabbing a window. For me at least. It probably has to do with how often I find myself moving windows. Much more than I realized!

what do you mean by too much to remember?

You would just need to remember the modifier keys (e.g. cmd+shift) which you set. Then the snap areas will only show while pressing these.

I have 10 custom snap areas (5 for one of my desktop screens, and 5 for a second screen - not 2nd monitor). It would be a lot to remember which shortcut connects to which snap area. (My windows overlap in such a way that I can see the corners of every window regardless of which one is active, so it's not evident which snap is 1st, 2nd, 3rd, etc.)

For what it's worth, Apple's implementation of their half-screen tiles essentially amounts to requiring a hotkey to snap. The window doesn't snap every time you drag it; rather, you must press and hold the expand button. A keyboard shortcut is infinitely better, however.

To be clear, this doesn't diminish how much I love BetterSnapTool, and the functionality of the app is obviously more convenient than these issues are inconvenient or I wouldn't continue to use it. Thank you for building such an elegant and versatile product!

I think there was a misunderstanding, you can set them all to appear on the same combination of modifier keys, e.g. make them all show up while holding shift+cmd.

Yes! I just found it! Exactly what I was looking for. Funny because I had thought I'd seen the setting but couldn't find it again. Thank you! 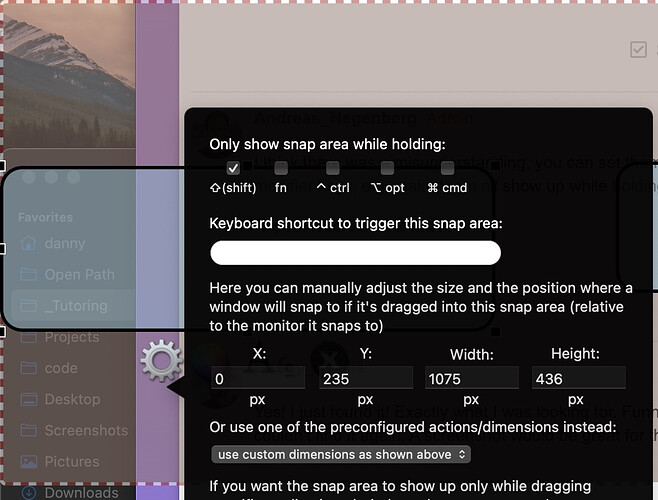