Describe the bug
Paste from JSON in clipboard crashes BTT

Occurs with this preset:

A timer widget for the touch bar I made a simple timer widget for the touch bar that actually consists of just one widget. When pressed, It asks for the time via a dialog popup and starts the countdown. If pressed again, it cancels the countdown. When finished, it blinks red/black a few times. The widget only refreshes regularly while the timer is actually running, so the power usage should be really low i think. [05] [46] [20] feel free to leave feedback! Widget JSON: { "BTTWidgetName" …

I think it might be because since recently after updating, my BTT is in german (I'm from germany) and I just realized there is some german in the JSON, too. Maybe I'm blind here, but I can't find a setting to switch the language back to english. I'm using BTT version 2.756.

Edit: actually BTT itself isn't in german, but some integrated apple stuff (or whatever you would call it) is: 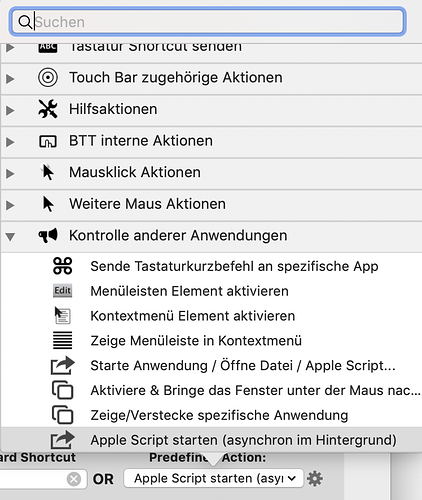 Edit 2: Actually maybe the change of language didn't occur after a BTT update. I figured but I'm not sure. I'm using macos version 10.14.3

the bug is not related to the language, I will fix it with the next alpha!

(the readable parts in the json are just for readability, they are not actually used)

I thought I was able to reproduce this, but turned out my issue was something different. @yuukio, could you post the crashlog from your machine? (console app => user reports)

Unfortunatley my MacBook is being repaired

(N key was double pressing so I went and did the free keyboard replacement. Turns out they’re gonna replace the whole enclosure with the keyboard, including a new touchbar, trackpad, new battery and speakers for free because they welded all of that onto the enclosure

These shitty keyboards are so annoying.

I actually like the keyfeel, how little I need to press them and how CRISPY the click is, is nice. If only they had better ingress protection..