I can't figure it out and am hoping someone can help me!

I want to make a gesture for trackpad so that if I do a two-finger tap on a link, it will open that link in a new tab in the background in Safari. Is that possible? Seems easy enough but I don't see any options to make it work via BTT!

Easy!
In Safari Settings, go to → Tabs and check the Box "⌘-click opens a link in a new tab".
In BTT, Set "Two finger Tab" to Action "⌘-Click" (You can limit this action to Safari).
Pay attention that your two finger tap does not interfere with your trackpad Secondary Click Settings (in System Prefs → Touchpad).

Thanks, that was easy!

Now I want to make a gesture for a Logitech mouse so that if I do a right-click on a link, it will open that link in a new tab in the background in Safari. Is that possible? Looks like Logitech mice are severely limited with the right-click customizing....

This should be possible with the same action in the "Normal Mice" Tap of BTT. 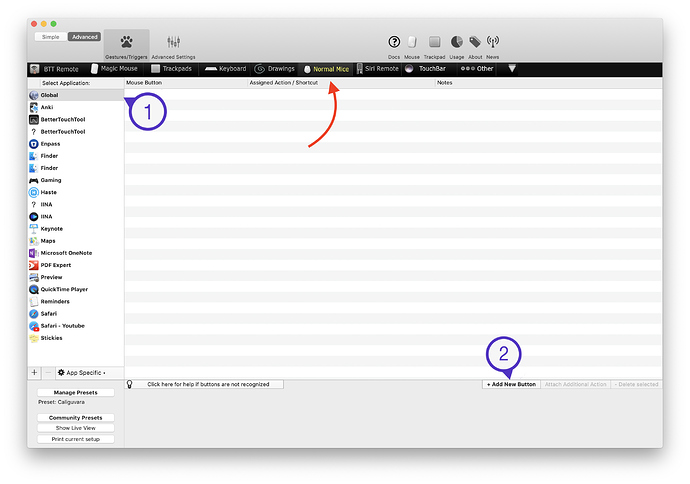 I've got that ready to go... only thing is that a right-click requires a modifier key.

Is there any way to bypass a modifier key? I'm hoping to just right-click and go. Not sure why it "requires" a modifier key... but hoping there is a workaround. Thanks so much for your help!

What is the Logitech Mouse we are talking about?

A Safari update broke a Safari extension I used to use to be able to two-finger tap on links and it would act as command-click to open them in another tab in background despite fact my trackpad secondary-click settings also have two-finger taps set to right-click.

Is there any way to get BTT to emulate that? Right now BTT does allow me to two-finger tap on links and it opens tabs as desired but it also still triggers a right-click contextual menu right afterwards making it cumbersome.

Any ideas how I can achieve this without turning off two-finger tap for a context menu or three-finger drag?

I tried four-finger tap and it works, but it's awkward and I don't always get all four fingers down and makes it hit or miss and not practical.

I found a workaround.

It now works with LinkThing on Sierra Safari. Without LinkThing, BTT opens the links in new tabs as it should, however it also triggers the contextual menu for the link which must be dismissed with another tap outside of it.

With both the BTT setting AND LinkThing, it opens the tab like it used to do without the contextual menu popping up.

It appears this workaround isn't needed in macOS Mojave's Safari and will work with LinkThing without issue, but this fixes whatever Apple did to the Sierra Safari version to break it.

The BTT's setting of CMD(⌘)+Click was spotty and hit or miss. I'd sometimes have to hit it twice to register. I changed it to 'middle click' and now it works faster and flawlessly with LinkThing.

After further testing I see that middle click is spotty as well where I often have to tap twice for it to register. Such a shame.

I had the same issue on a different machine with Catalina where if I set BTT to use a two finger click on a link to act as command-click and open the link in a new tab in the background - and the contextual menu would pop up.

There is no LinkThing extension for Catalina's Safari so I made this workaround.

This works without triggering the contexual menu if I do this over a link. I'd still prefer a simple two finger tap but haven't figured out a workaround to either not trigger the contexutual menu or perhaps automatically dismiss it quickly. I thought about maybe making an AppleScript to do this somehow.

Any input would be very appreciated.

Hi there, I'm so glad I've found this thread! I've been looking for MONTHS for a workaround to this.

There used to use Chrome and a Chrome Extension called 'Right click opens in new tab' which did exactly this and opened up clicked on links in a new tab.

I have since moved over to Safari which I love but really miss this feature and have been scanning forums ever since to find anyone else that is trying to find a workaround to this.

I have been trying to work on this with my BTT aswell but haven't found a good solution. So far GestureKing here has got the closest.

I am just replying here incase anyone else has got any closer to this one - I would be greatly appreciated if so! Thanks guys

The solution I ended up with was suggested by the Dev and works without needing any Safari extensions. It seemed counterintuitive at first, but works perfectly without affecting right-click functionality for macOS in general. This process removes the "conflict" macOS has with trying to have two different functionalities with right-click with two-finger taps.

Turn off right-click in the macOS preferences then immediately replace that functionality with BTT. Then use BTT to enable Safari to open links with a 2 finger tap. Steps below. 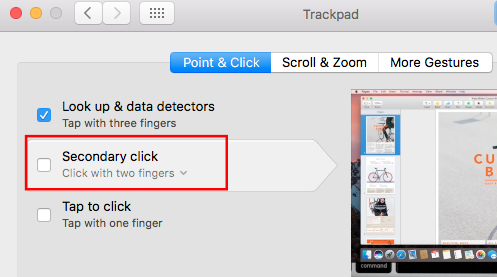 You're now able to two-finger tap on links in Safari to open them within new tabs in the background. Of course, you need Safari enabled for it in the first place:

If you still want to see a contextual menu for Safari links, you can hold down the control key and tap on them.

Not sure why, but this BTT behavior doesn't work while I remote into a Mac though Apple Remote Desktop, but it does work when I'm using the machines directly, but that's the only glitch I've found.

Guys thank you SO much - this totally nailed it!
Love that it doesn't sacrifice functionality - if you still want the dropdown menu you use control - Brilliant.

(This way makes so much sense to me! When browsing to use the keyboard only for the dropdown menu instead of opening links - considering how many times more times I open links)

Once again man thanks to you and the dev - this has now completed my Safari experience and I can finally lay to bed the ram hog that is Chrome! -I'm going to post a link to this page on another couple of forums that had others stumped.

Keep on doing what ya doing - Legends!