Describe the bug
Tapping on the now playing widget, when configured to bring the default player to front, does not bring the app to front. This seems to be a regression, because I feel like this bug has been fixed before.

"An error occurred in retrieving update information." Update server down?

Sorry I quickly disabled it because there was a stupid bug in 2.703. Will be back in about an hour.

Not working on 2.704 here. I have media playing in iTunes - not even in fullscreen or hidden, just not as the active window. Tapping the widget doesn't do anything. I've confirmed that the widget is set to bring the currently playing app to front, so it's not a configuration issue.

Someone in my office who uses my preset reported the issue to me, and I've been able to reproduce it, so it's definitely not just on my machine. The issue also happens on my 2016 MBP (which I still have).

That person is on the stable GC-BTT and BTT release, so 2.641 / 2.698 respectively, and is running the latest stable release of Mojave, so the issue goes back to at least BTT 2.698. 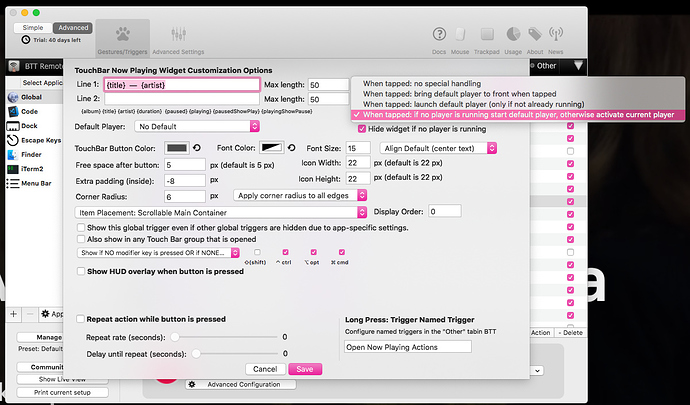 That worked! Did this setting change in some version after 2.641? It seems like it is an import bug because this feature definitely used to work in my preset. But maybe I'm crazy...

welp, at least it's fixed lol. I'll push out a new experimental version with the change.