Notch Bar and men bar not showing together?

I saw this demo video by @Andreas_Hegenberg and it shows both the new BTT Notch Bar and Menu bar together. I enabled the notch bar but I only see only at a time and have to scroll to see the other one. So, 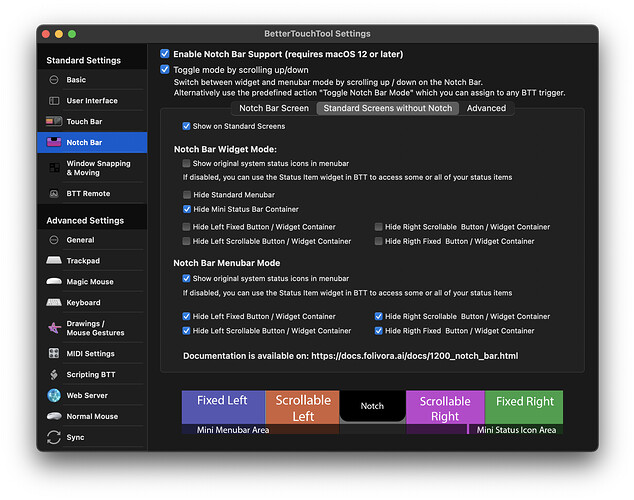 Unfortunately the height of the menubar is fixed by Apple and I don't know of a way to change that yet. Because of this, the simultaneous display of widgets & menubar is only supported on screens with a Notch - because there the menubar is taller.

It's easy to change this, but one of the two would then be really small.

Thanks for the response @Andreas_Hegenberg .

It's easy to change this, but one of the two would then be really small.

I think it would be good to have this as an option. I'd definitely use it.

Also, anything suggestions about this:

How I can see all the menu bar items on the notch bar without all the status icons (like time, battery and control center). Trying to use it as Bartender

It's easy to adapt the current template yourself, I'll post an example on how to also show the menubar later.

To get rid of the status items, check this option: 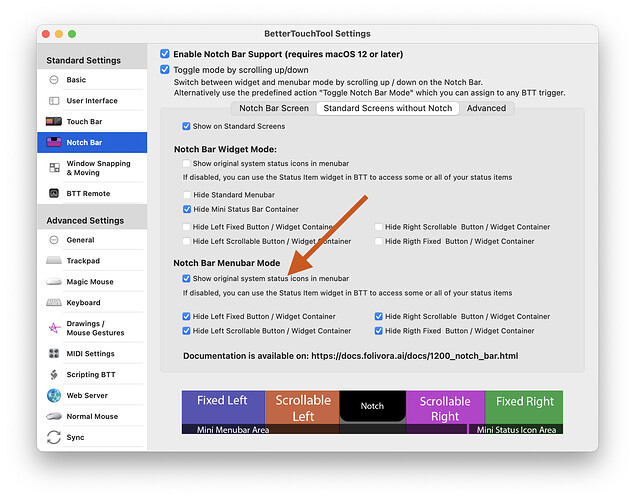 You can then use the "status item widget" instead.

Here is a simple example on how you can show menubar and widgets at the same time on a standard menubar:

Into this file:
~/Library/Application Support/BetterTouchTool/BTTNotchBarUser.css (Go there via Finder => go => Go To Folder, make sure to include the ~) 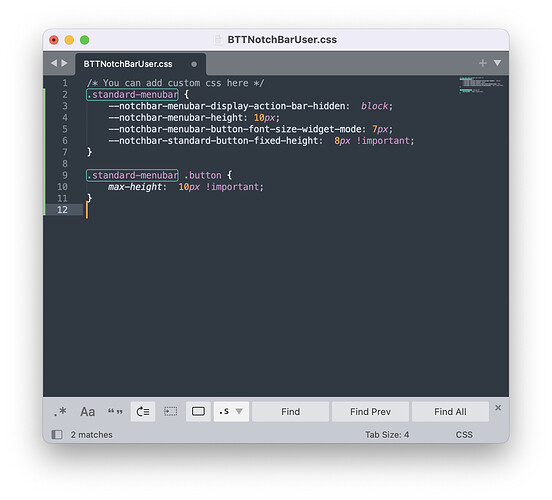 What I am trying to do is have all the menu bar icons remain hidden in the mac's menu bar since they collide with the current's app menu items. And have all show up in the Notch bar, that way the current app's menu items won't ever collide. However, they still collide and auto hide themselves, and behave the same way as in mac's menu bar. I want them to be able to keep expanding until the left corner on the screen in the notch bar.

As you can see, if I add one more item to the menu bar, they hide themselves

Any way to accomplish this?

I know its still in beta but a few other questions: 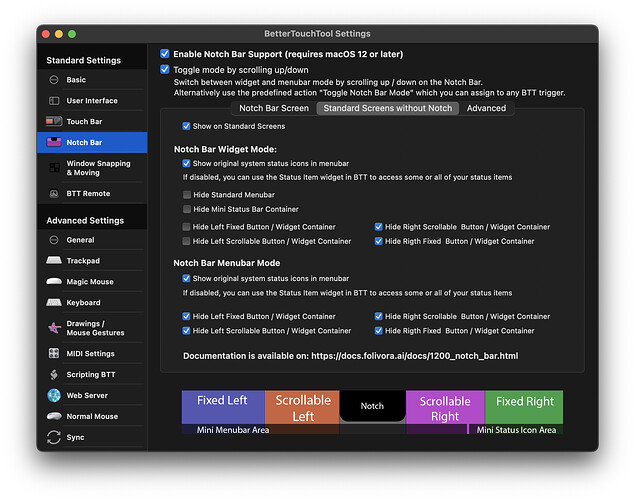 If you uncheck the "Show original system status icons in menubar" for "Notch Bar Menubar Mode", it will not show them while you are in the mode that only shows the menubar (switch modes by scrolling up / down).

You can add the status item widget to the right fixed area (and disable "hide right fixed button / widget container" for the "Notch Bar Widget Mode"), that allows you to select only the few items you always want to show.

I'm still learning a lot about how people use the Notch Bar, so these settings will get easier eventually

and conditional display of menu items

BTT version 3.821. I was seeing a rather odd behavior when enabling Status Item Widget for the Notchbar screen, the icons would initially display, left shifted so that all were visible. But then they would shuffle to the right where some icons would be obscured under the time widget. Turns out I that when playing around with the features I re-enabled Show Original System Status icon in menubar as shown. With that disabled again it is working as intended.

To make the various menu items select-able I needed to restart BTT, as simply clicking show all status items in the widget didn't make them select-able. I've noticed this selection issue in a couple of places, but restarting BTT has so far been the work-around (with the selection switch in the desirable location of course).