Sorry if this has been covered already, alas my search did not yield any results -

as already stated in the title what I'm searching for is a preset that basically shows nothing / a blank touchbar, but which makes [fn] bring up the whole set of legacy functions like change brightness, volume etc. - so basically the exact behavior as with the legacy function keys (just omitting the regular F1-F12 functionality completely).

Is this even possible with BTT (to have [fn] act as a modifier)?

Thanks in advance for any help!

Not sure what you're exactly looking for - basically copy the behaviour of the Magic Keyboard with that layout?

Easy. Create a new preset. In the BTT settings, make sure you hide the macOS strip.
Now create a new button, give it an icon, hide its text, and add the desired action. You should find them all provided by BTT. 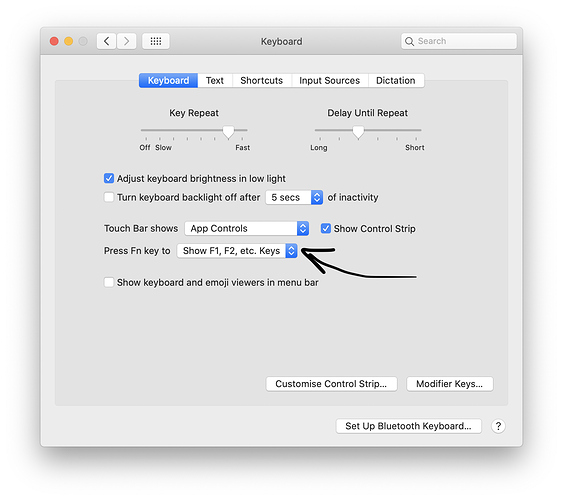 This said, it would be a pity to cut the Touch Bar down to this. You can do way more with it!

Thank you for your prompt reply!

Yes, indeed I just want / just need a blank bar, with the brightness / volume controls, and maybe play / pause and a sleep button occasionally (so would like to have it blank by default, and have the few buttons show up with the fn modifier key pressed).
I know it's sort-of weird as BTT could do much more but that's just what I would like to have.

Actually if this would work I wouldn't even need BTT, but for me there is no option to display the fn keys when pressing fn unless I'm missing something here, I just the App Controls, F1 F2 keys, Quick Actions or Spaces.

Oh got it. Take the section above (Touch Bar Shows) and change it to "extended Control Strip" (or something like that). Adjust it to your desires using the "customize control strip" Button. Et voilà!

Thanks again @Caliguvara for trying to help.

This is indeed what I'm doing so far - setting Touch Bar shows to "Expanded Control Strip", and then Customise Control Strip... to actually make it show nothing but a blank bar - which is what I want.

What I can't do in the OSX settings though is: make fn bring up the legacy functions - as one can only use Press Fn key to either "Show App Controls", "Show F1, F2, etc. Keys", "Show Quick Actions" or "Show Spaces".

This is basically the whole dilemma - that there isn't the option to make the Fn key actually bring up the legacy Fn functions.
Which is why I thought I could try establishing a workaround with BTT..

Okkkk now I got it I think, tell me if I'm wrong:

For this, make the keys as I described them above. Only thing, make them "modifier key sensible" using fn as criteria.

Okkkk now I got it I think, tell me if I'm wrong:

..indeed this is exactly what I want to do; sorry if that wasn't aticulated clearly right from the beginning.

I will make the keys as you suggested when I have time and add the modifier.

I found way easier. My bad!

This should get you to what you want way easier than what I thought of!

..this is not possible unfortunately, as mentioned above -

there is no option to display the fn keys when pressing fn unless I'm missing something here, I just the App Controls, F1 F2 keys, Quick Actions or Spaces.

Oh, what macOS Version are you running? Because on the screenshot I attached early I could easily select "Expand Control Strip" as an fn action. And with the BTT action this will have two effects:

Edit: got it. Set "Touch Bar Shows" to "App Controls" and "Press fn key to" "Show Expand Control Strip"
This paired with the BTT settings (replace the macOS Touch Bar with a black, useless button and disable BTT when fn is pressed). will do what you want! Just tried it

Thanks again @Caliguvara for your help, I appreciate it.

Went through the procedure as you described and set things up in preferences as noted above, just got confused as - while it actually worked as it should - while having BTT open / as the active app, the touchbar actually kept showing F1-F12 keys, which led me to believe somethig is wrong.
Command-tabbing to finder or something else actually showed a blank touchbar right away.

So in the end I got it working, thanks!
There remained kind of a glitch where it would actually always flickr the touchbar (show the app-specific buttons for the blink of an eye) before going black, which really was kinda annoying -
then after a restart the touchbar again didn't stay black to begin with.

Am sort-of resistant to spend more time on this project at the moment and have gone to the all-black, function-less touchbar again for now..