Hi, I am thinking about replacing my two 27" Screens with one 49" Screen (Phillips 499P9H). My MacBook Pro early 2013 won´t handle the resolution of 5120 x 1440 well so I my idea would be to run the monitor as two separete screens in 2560 x 1440 Picture-by-Picture-Mode - so virtually my MBs sees about the same configuration I already run by now. The problem is, that the focus area in the center on the screen would be between the two virtual screens. I can define a custom snap area with BST that would allow me to use the center of the virtual screen efficiently, if I deactive the Mission Control option "Displays have separate Spaces". But this solution brings on major problem: the menu bar disappears on the second screen. I used SecondBar before Apple introduced the "spaces for each monitor" feature to get a menubar on the second screen, but SecondBar does not work correctly any more (no wonder, its long abandoned).

So, after this long introduction my short question is: Would it be possible to add a second menubar feature to BST? That would be great

(last touched the code 10 years ago)
It never worked well because the macOS API's don't make it easy do to this stuff and it got worse with every release of macOS.

BetterTouchTool has a "Show Menubar in Context Menu" action. Maybe that could help in your case: 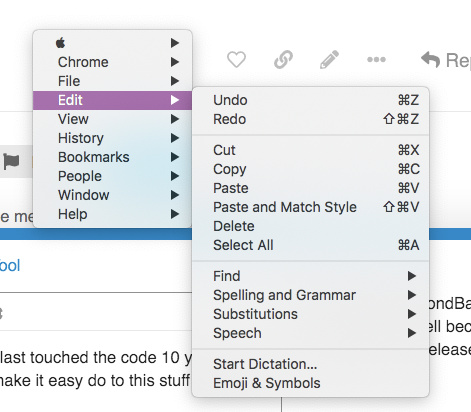 Thanks for the quick reply!

That´s a pity, but I expected something like that, as there is no other software for that problem. But maybe your suggested solution with BTT could be a workaround.