HUD Overlay 'Show when gesture is triggered' doesn't work unless there is also an action assigned to the trigger.

I created a new trigger:

Which has no actions assigned to it:

And I configured HUD Overlay's 'Show when gesture is triggered':

When I trigger my gesture, I would expect to see the HUD overlay show up; but nothing happens.

I then configure any action for the gesture:

When I trigger my gesture now, the HUD overlay shows up, as expected

(even though there are definitely some formatting/cropping issues with the text shown in it): 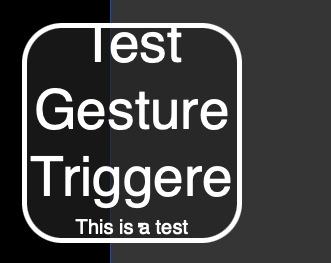 If I remove the configured action again:

When I trigger my gesture, the HUD overlay doesn't show up again

This is due to some performance optimizations BTT does. In order to not evaluate not used triggers, a trigger without any actions is usually not even loaded from the database.

I guess it would be good to have that shown in the UI somehow, so that it's not an 'unexpected thing' to the end-user. A little i info note or similar in that section would be helpful; or possibly even having it disabled/greyed out when there are no actions configured (ideally with an explanation as to why it's disabled) would make this feel more like an 'explicit feature' rather than a 'weird and confusing bug'.

Yup, maybe I can even consider the hud option as an action. I'll do some experiments with that.

Awesome! I appreciate your efforts/work!