It's been a while since I posted something on this forum, I've been doing iOS jailbreak/customisation stuff.
But I'm back and I'm posting a tutorial on how to make a Command + Q confirmation box to prevent accidentally quitting an app.

Open BetterTouchTool, and go to Command + 4 (keyboard shortcuts). Make a new shortcut that does Command + Q.

Step two:
Set the action to 'Run Apple Script (blocking)', and paste in this script:

Step three:
Now, close the BTT window, and you'll get this pop-up when you press Command + Q: 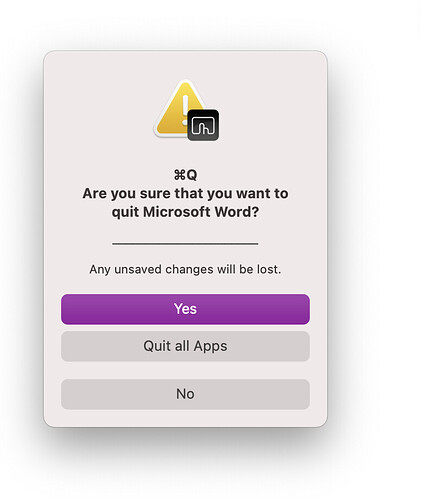 When you press 'Quit all Apps', you'll quit everything except Finder and BetterTouchTool. To customise what quits and what doesn't quit, find the line in the code that says set keepapp to {"Finder", "BetterTouchTool"}, and put the exact name of the apps you want kept open. To find the exact name, open the app and look at the left of the menu bar on your screen. It will say the name of the app.

When you add your own apps to the list of apps you want kept open, make sure they are inside speech marks (") and are separated by a comma (,). The last one on the list does not have to have a comma at the end, just leave it.

I hope this helps some people!

First, thank you for sharing! These kind of script that save us from buying "expensive" app to prevent accidental quit is always appreciated.

However, I've not tried the script and want to ask whether if you press ⌘Q twice, will you trigger the "Quit all Apps"? Given macOS' behavior on popup, ⌘ combined with character will trigger the button that started with that character

I never thought of that, maybe you can add that yourself in the Key Sequences section.