I would like to be able to make a floating toolbar similar to the Touch Bar or Notch bar but that I could move around the screen. Ideally it would be able to be vertical rather than horizontal. I have tried using the Accessibity Keyboard with customized panels and for the most part it works but there are some keystrokes that don't go through on certain buttons although they go through on other buttons. If something like this could be done with scripts please point me in the right direction. It would only have to be a text version (similar to the context menus - but always visible).

Since posting this I have looked into the floating web view and tried an example for that. It doesn't seem to work for what I need though. I am trying to send a sequence of keystrokes (type text) to an app but I can't get it to do that. I am rusty at html so I may be doing something wrong. I have a bunch of named triggers that each send a different set of keystrokes to an app. It works fine to use them with Touch Bar buttons or context menus but can't seem to make it work with a floating web menu. If someone could give me the basic html code to create an assortment of buttons and simple code to call a named trigger that I could build on would be great. I don't need all kinds of java script or fancy layouts - just a button that calls a trigger that sends text to an app.

If you need completely customizable floating toolbars (See examples), always visible and
wherever you want them on the screen (move around), then check out Keyboard Maestro. With this app you can create any kind of so called "palettes" and trigger all actions that you defined in BTT with a click. 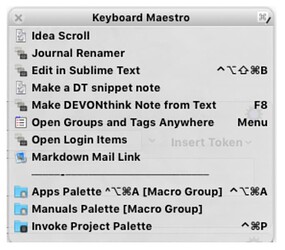 Thank you. I tried it out (haven't purchased yet) and it seems to work for what I want. I've seen this advertised quite a bit but thought it was too expensive but it does a lot of stuff.

BTT and KM are good friends. They like to work together