Find and Replace in Selected Text

My specific situation has me converting html encoded URLs back to decoded URLs hundreds of times a day.

Unfortunately I haven't gotten to that feature yet, it has been on my todo list for quite a while. I hope this will become possible very soon.

With Automator you can however relatively easy create a quick action that does this: 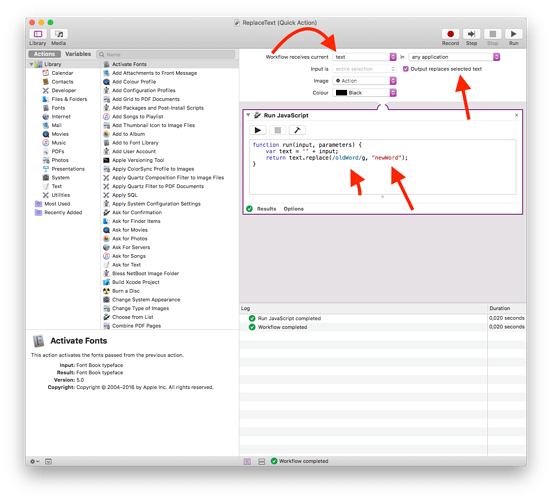 You can then assign a keyboard shortcut to the quick action in System Preferences =>Keyboard => Shortcuts and trigger it in BTT if you want.

(For some reason it's necessary to concatenate an empty string with the input first, otherwise it will throw an error.)

It also works using BTT when doing it like this:

The shell script action would be configured like this: 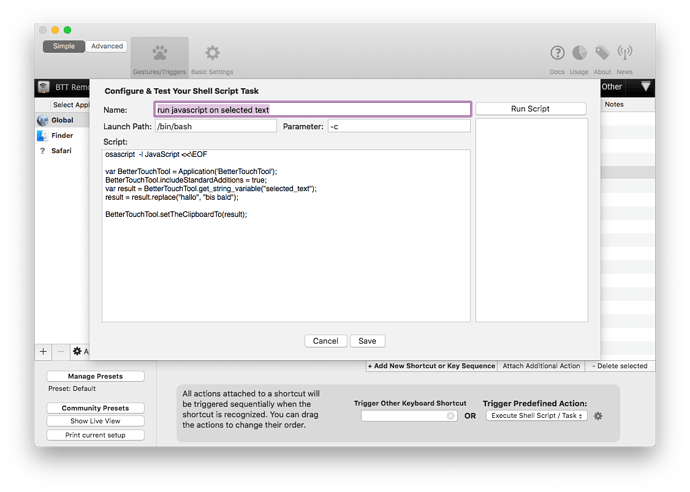 Instead of the replace, you can also use the JavaScript url decode/encode functions.

Thank you for your quick reply. I was not able to get this working. I did find this page from Apple, do you think this might hold the key to the answer?

When I replaced the text with the encoded text (eg: & a m p ; ), there seems to be an issue with the semi-colon.

I was able to solve this issue by using TextSoap. I applied a keyboard shortcut that is triggered by the touch bar. It seems to work flawlessly.

I'm trying to do something similar, but I can't get this example to fully work either. The last step, sending the ⌘V , sends the PREVIOUS clipboard contents. I've tried adding in manual delays between various steps thinking it's a timing issue, but that doesn't help either.

If I remove the ⌘V step, then manually hit ⌘V after running the script, it does what I would expect.

I'm testing with exact same script/action as Andreas's example above.

I am having the same issue where having ⌘V at the end uses the previously copied item. A bug, perhaps?

I was trying to do the same thing. I found the following shell script to decode HTML which looks pretty simple, but don't know how to make it work with the selected text?

Has anyone ever figured out why the paste step used the PREVIOUS content and found a solution / workaround ? I believe I have a related issue with variables having prior content in them...