I use the function “Execute Shell Script / Task” to execute a python script.
The python script imports the module psycopg2.

Based on the discussion here, I have set a environment variable as follows:
PYTHONPATH=/Library/Frameworks/Python.framework/Versions/3.10/lib/python3.10/site-packages/

But I still encounter the following error in BTC:

Please note that the script runs flawlessly in Terminal.
I can also import psycopg2 in Terminal (and confirm that psycopg2 does have a module called psycopg).
So the error does not come from a bad installation of psycopg2.

What does the rest of your config for the shell script / task action look like?

Hey Andreas, thanks for reaching out.

As mentioned earlier, the script works fine when I run directly from Terminal, ie:
python3 /path_to_file/file.py

Have you tried like in the other thread you referenced? So instead of using /bin/bash -c directly using python?

Thank you! I tried specifying the PATH variable for python3, but seem to be getting the same error. Am I missing something obvious? I also tried $PATH and both with/without parentheses around the folder. [56]

That looks promising.
What would be the syntax, for pointing to a .py file in the script box?
I tried the absolute path, namely /path_to_file/file.py

I get the following error:

With Launch Path set as "/usr/local/bin/python3", I did try the following:

Unfortunately, the script (backup of a local db) gets stuck.

The only workaround I found is to:

Thanks.
No error, but nothing happens

Weird, and it works if you do

on your terminal? What does the script do?

Yes, it does work.
I keep on looking for a typo somewhere, but I can't find any.
I copy-pasted in Terminal the following command:
/usr/local/bin/python3 path_to_file/file.py

I think there is a bug in BTT if no parameters are provided. I'll fix that.

Could you try to pass some parameter that doesn't have any meaning in this scenario, e.g. -q 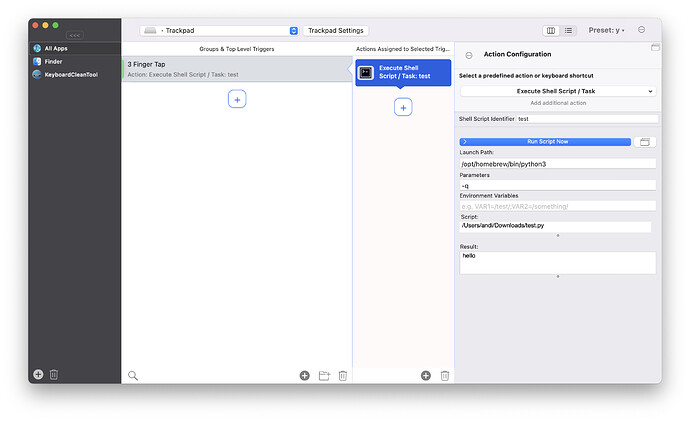 Adding the -q flag did have a positive effect: the script started!

Unfortunately, the script (backup of a local db) gets stuck again.
Same outcome as with attempt n°5/11, above (with import sys).
The function is a simple wrapper around pg_dump.
Yet the backup gets never produced.
(The script works flawlessly when I run it through Terminal).