Is there away to emulate a TAP on keyboard? More like a shortcut that emulates a Tap on the trackpad

This would allowed me to scroll with two fingers on all open Apps, once I get to the app I wanna open I release my two fingers and BAM it would open.

But after reformatting the Right click doesn't emulate a tap anymore. without a tap after the initial tap my two fingers wouldn't let me scroll.To make the scroll happen I need to double tap. So I'm looking for an alternative to emulate a Tap with a shortcut key

The system doesn't register keyboard "taps" without actually pressing the key. If this is what you mean then you're out of luck.

I want I want is for example to press shift+Option+Cmd+D and this would emulate a TAP on the trackpad.

You can just assign the "left click" action to that shortcut: 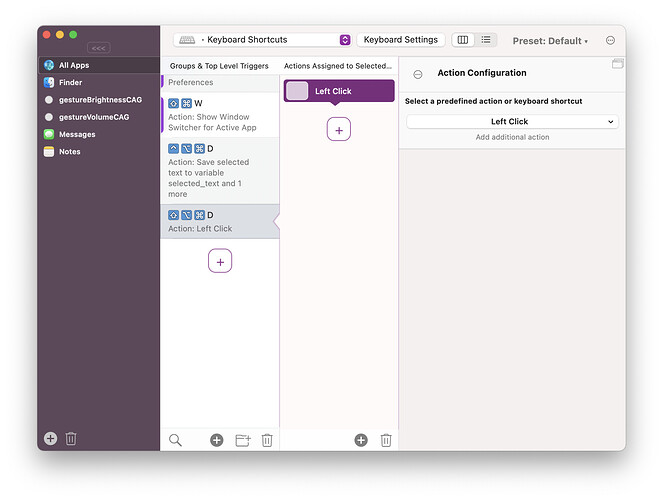 I tried that before, moreover tried all the Mouse click actions and nothing emulates a Tap. I wonder what would had happened to my previous set up. I didn't touch anything. all I did is import all my Master Preset to the clean reinstall of BTT.

It is possible that the left click is affected by modifier keys like ctrl or cmd. Are you sure you used that same shortcut before?

Maybe I wasn't clear sorry.
I have the following set up.

What this allowed me to do is activate the App Switcher(use special application switch. Checked)

Question for you, what would a newly BBT default settings might have changed?

Ah I think that might have worked due to an old setting that is currently not accessible via the UI anymore.

Could you try this terminal command while BTT is quit?

Yes I forgot to mention the version that worked on was 3.206 (Catalina. MBP 2013)
What changes you made to app switcher or scroll or Mouse click actions, if anything?

I copy and pasted "defaults write com.hegenberg.BetterTouchTool specialAppSwitcher YES" and enter and it just shows this after. and restarted BBT and still it doesn't work.

Did you run the command while BTT was quit? (Otherwise it will immediately override it again)

Absolutely I quit BBT before running it. I might have to restart Mac perhaps?

No that should not be necessary

It is possible that the behavior of the app switcher changed with recent macOS versions.
Which version of macOS are you currently on?

Perhaps it was a bug that the right clicked emulated a tap, and you found it and fix the bug? lol

This worked for me for many years though

Again this happened after reformatting my Mac.

In general the delay and right click should not even be necessary if I understood correctly.

But you can't scroll with two fingers.

You have to double tap with the third finger to activate the scroll.

The Right click(acted like a tap) allowed me to tap a second time. I had it for many years like this.

Perhaps the Right click (tap emulation) was a bug and eventually after 3.206 you fixed it.

ah interesting behavior.
I can also make it scroll by switching from the right two fingers to the left two fingers.

I think I should be able to allow it to scroll immediately but I need to do some debugging here to see what's happening internally (I think it has been 10 years since I touched that code :-))

Yes it took me awhile to get this right years ago. Wanted a fast and easy way to bring up the App switcher and scroll through.

It went like this.
Two finger fix, tiptop left. then just scroll through my apps swiftly, release two fingers and boom app opened in less than 2 seconds.

The key here is to ACTIVATE the scroll somehow.

YES, would be awesome to just have it scroll it immediately with out additional Actions attached. As a developer I'm sure you are able to get around it.

Thank you in advanced