I would like to add a BUTTON (called "Emoji") to the Touch Bar that will allow me to select an emoji. (Similar to the "Emoji Widget"; but when the button is tapped the emoji selector should take-up the entire width of the Touch Bar--see attachment, for a visual.)

Alternatively, I would be fine if the Touch Bar button brought-up the Emoji Character Palette. But currently nothing happens when I tap my Touch Bar button. (see attachment, for my current Action/Trigger).

I solved this by following these steps:

If there is a method of taking screenshots of the toolbar itself, I could share how it looks, but no idea how to do that other than taking a real pic of it...

Thanks @smileBeda! I'll give that a try & let you know how it goes for me.

I find that the (easiest way) to take a snapshot of the Touch Bar is to use the built-in keyboard shortcut:
Command + Shift + 6.

In the group, insert the emoji widget and the close group button

This worked! However the behavior of the "Emoji Widget" isn't quite as convenient, compared to what Apple built-into (some of their) apps.

I really wish the "emoji widget" offered the ability to "go-to" a specific emoji category. 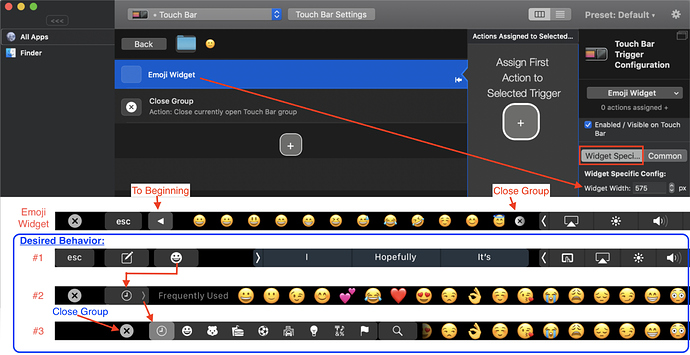 Happy I could help, and thanks for cmd shift 6, - but it did not work for me.
CMD shift 4 makes a screenshot, however cmd shift 6 did not take a shot of the ToolBar.

Related to the widget itself, that would be a topic I cannot answer, I think a FR would be reccomended here (feature request)

Of course cmd shift 6 makes the touchbarshots.
Here one of them to memorize the discovery of TouchBarShots in my end of the world

TouchBarShot from touch bar with calendar, reminders expanded (usually collapsed). Colours dynamic on whether or not there are entries.
Additionally a bunch of dynamic browsers related commands to the left (can be used in wide sort of browsers), ESC, then to the right a group to open commands like wifi on/off etc
CMD and OPT each show either commands or things to see (no actions, info) if pressed separately

Nested Groups open to reveal additional actions depending on browser:app (had to edit a bit due to privacy).png2170×60 35.9 KB