I have an issue with Dropbox Sync.

it appears that the Dropbox Auth / token / API access get corrupted / lost, because BTT ask for Dropbox credentials really often.

There is no pre defined period I think something get corrupted, but I would say 2 / 3 times each week.

Any idea to resolve this ?

It looks like each time this happens, settings from Dropbox overwrites those on the computer. I just lost my latest configuration updates.

Mh this is handled by the Dropbox SDK.
I think the token is saved into the Keychain as com.hegenberg.BetterTouchTool.dropbox.authv2, if that happens again, could you check if that key is still there in your Keychain?

I'll soon update to the latest version of the Dropbox SDK, maybe the version in BTT was buggy (https://github.com/dropbox/dropbox-sdk-obj-c )

I find this happens constantly and it is annoying. No other program I have requires this?

Possibly try the latest alpha, I have updated to a newer version of the Dropbox SDK there. Maybe they have fixed the issue (although I have never encountered this myself).

This API request is happening to me about 20 times a day. I constantly have a bunch of tabs opened requesting access. Any idea how I can fix it?

Usually it's some sort of file permission error if that happens.
I'd try to delete this file while BTT is quit: ~/Library/Preferences/com.hegenberg.BetterTouchTool.plist (create a backup of it first)

Also try to delete com.hegenberg.BetterTouchTool.dropbox.authv2 manually from the Keychain app.
Are you using an official BTT version downloaded from https://folivora.ai? (Otherwise the code signature will not match and things like this can occur)

Thanks. I've deleted the .plist file but it's still happening on a seemingly regular interval (about once or twice an hour).

I looked for a Keychain entry but didn't find any entries for BetterTouchTool.

If t here is no entry in Keychain, that would explain the issue. But I have no idea why the Dropbox SDK wouldn't be able to write to your Keychain :-/ Do you have any special config there? 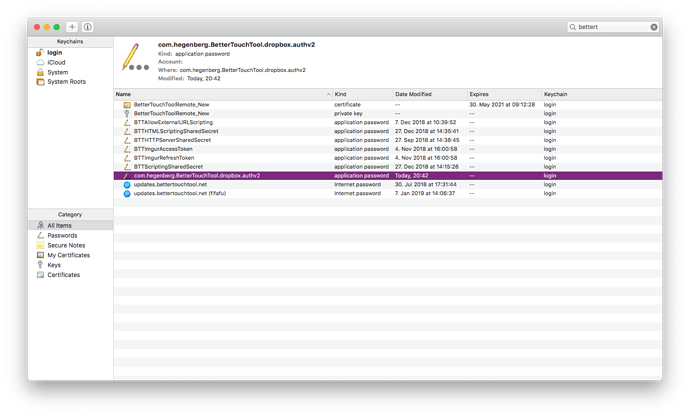 Oh, the keychain entry for com.hegenberg.BetterTouchTool.dropbox.authv2 has actually just appeared after I deleted some redundant presets (see my other post in the thread about BTT preventing screensaver). I wonder if there was a corrupt preset related to both issues. I have backups I could send if you're interested.

Would be great if you'd send the backup to andreas@folivora.ai, maybe I can find something.

Within 30 minutes two tabs open with requests for Dropbox Authorization. The keychain entry has also mysteriously disappeared. Any ideas please?

I assume there is some unknown exception when BTT tries to sync. That's the only reason an access token reset could happen. Maybe go to the about tab in BTT and click the "Export Debug Information" button right after this happens, this will create a folder called BetterTouchToolDebug on your Desktop that you can send to me.

One more thing to try would be to delete the cloud data (this could resolve some deeper sync conflicts): 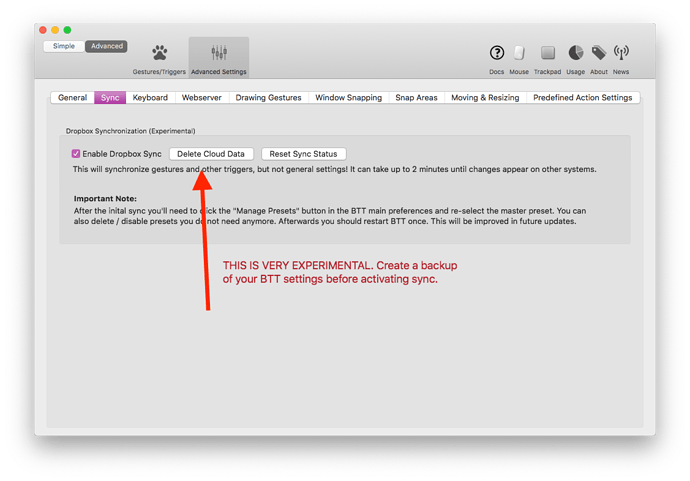 This has picked up for me again just over the last few days. It would ask as though in a loop sometimes (many consecutive requests w/o any interaction)